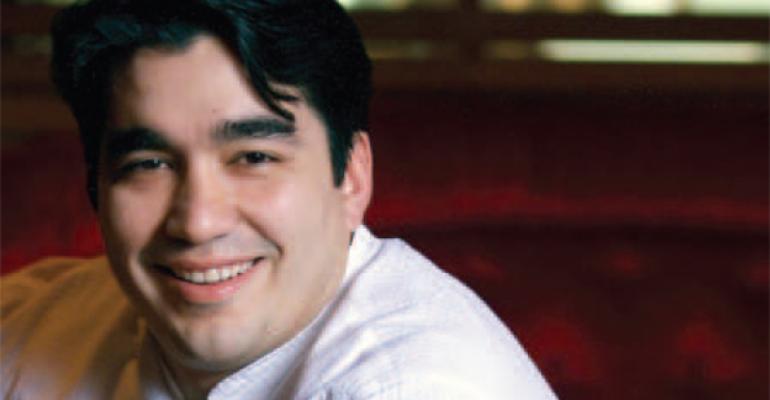 Even if Jose Garces wasn't a rising culinary star, we'd honor him, anyway, just for showing up to work. Every day, he labors in the shadow of giants, including Stephen Starr, Philadelphia's greatest restaurateur; David Rockwell, the legendary restaurant designer; and El Vez, a Chicano Elvis impersonator with an impressive cult following. Garces is the executive chef at Starr's latest restaurant designed by Rockwell and named after the Elvis impersonator. Nobody loves pop culture more than Starr and Rockwell, and they've created a Mexican mind-blower at the kitschy corner of East L.A. and Tijuana. And the best way to get there, apparently, is with a $20,000 neon-lit low-rider motorcycle like the one rotating above the bar at El Vez. It's a lot to compete with, but Garces, who is also executive chef at Alma de Cuba, Starr's other Latin restaurant, is more than holding his own at this funky Mexican circus. The Philadelphia Inquirer gushed over Garces, saying he “consistently focuses flavors from complicated dishes as well as any chef in town.” Philadelphia Magazine also praised Garces, saying El Vez is “sharply focused and brilliantly executed.” Garces has elevated El Vez from deliberately cheesy to deliciously cheesy. What more can you ask for?