A look inside Dig Inn’s latest store opening in Brooklyn 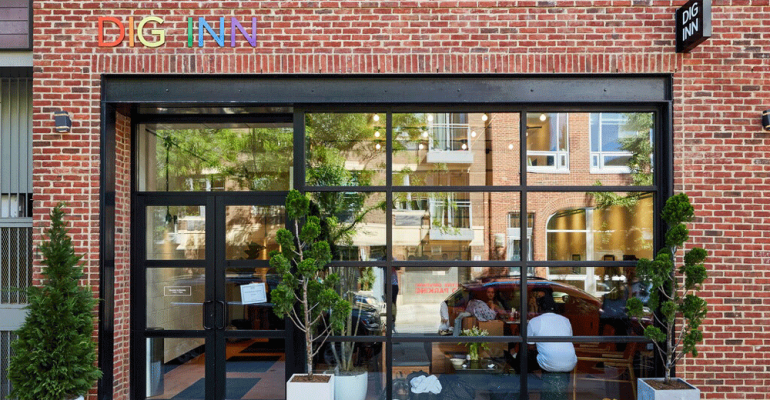 Start Slideshow ›
And a chat with CEO Adam Eskin on how and why he picks new locations.

On Wednesday, Dig Inn, the fast-casual chain with an emphasis on local, hearty fare, opened its 20th location, and its first in Brooklyn, New York. The hip vibe and seasonal menu of the chain seems to be an obvious fit in the borough, but CEO Adam Eskin waited for the perfect location. It’s part of his strategic growth plan for his business.

“It is our first in Brooklyn; I suspect it will not be our last,” he said.

Dig Inn, which was founded in 2011 after taking over a five-unit concept in New York City, has been “hesitant to move too quickly,” said Eskin.

“We're just trying to make incremental steps without going crazy and thinking about growth in terms of concentric circles. The complexity of our supply chain makes going too quickly or too far a challenge. Because you need to start over if you go too far and the nature of how we operate restaurants in terms of scratch cooking. There's a big training and development component and a recruiting component.”

The Williamsburg neighborhood space sits on a bustling strip two doors down from a Sweetgreen, a salad chain that Eskin considers a peer. Although being near a Sweetgreen wasn’t specifically part of Eskin’s real estate plan, he thinks it could be a benefit.

“Real estate is tricky,” he said. “You can be in the same submarket and trade area, one block in one direction or the other and be in the wrong spot. The intersection of Bedford and Fourth (near the Williamsburg location) is pretty powerful [with] the likes of Whole Foods and the Apple Store, so while we're frankly happy to co-exist with Sweetgreen, or Tender Greens or any of a number of our other peers in the space we think overall the more of us that are concentrated in one location, it's actually better for everybody.”

While Dig Inn started as more of a working lunch destination, the brand has been focusing on its dinner, weekend and take-away orders as of late. Eskin expects the neighborhood, with its abundance of families, will do a brisk dinner business. He also sees the space as welcoming to the local freelancer community. Outlets are abundant, and a beverage window will encourage guests to get coffee and other beverages throughout the day while they work, said Eskin.

Next to the beverage window shelves have been set up to accommodate pick up orders. “We launched the app over a year ago,” said Eskin, “And [pick up] is becoming almost daily a larger part of our business.”

The rest of the 1,200 square-foot location is airy and sunlit with lounge chairs and marble and wood tables.

The core menu will be fairly similar to the one the brand serves across all Dig Inn locations, but there will also be a “hyper-seasonal” menu with many ingredients coming from the Dig Inn farm in upstate New York, said chief culinary officer Matt Weingarten.

With the emphasis on beverages, including a beer and wine program (pending liquor license), as well as lunch and dinner, Weingarten, hopes this will “extend what a meal period is and what you're coming here to do. [Whether you’re] here to meet with some friends, have something to drink, relax at the end of the day, get some work done or just come in eat lunch and dinner and have fun and be on your way. So, we're trying to encompass all those day parts.”