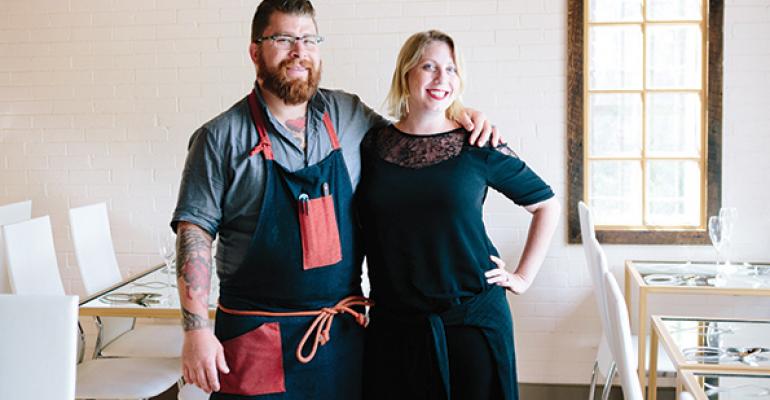 <p>Jonathon and Amelia Sawyer have added a new jewel to their growing restaurant empire with the addition of Trentina.</p>
Trends>New Restaurant Concepts

GALLERY: A look inside Trentina&#39;s tasting menu The James Beard-nominated chef surprises his fans with a new fine-dining, tasting-menu concept.

During a beautiful late summer morning, a grinning Jonathon Sawyer motors into the parking lot of his latest restaurant, Trentina. He pulls up the seat of his shiny Vespa and from the storage unit below he reveals the reason for his glee: Minutes earlier he had foraged 10 or so hen-of-the-woods mushrooms not far from the restaurant. The sight of them makes Sawyer as happy as a kid who just got a brand new Vespa for Christmas.

Sawyer, in fact, has gotten a new Vespa—because the scooter he had been riding wasn’t Italian-made and his partners could not abide. You can’t pull up to Cleveland’s newest, coolest Italian restaurant on a Japanese ride, can you?

But the new wheels don’t compare to the joys of finding exotic mushrooms. Trentina’s executive chef, Matt Danko, greets Sawyer in the parking lot and the sight of the magnificent fungi ignites a conversation about their fate. In most kitchens, a few ideas might be bandied about, but Trentina offers an exotic 12-course tasting menu and 7-course pasta degustation that continually evolves. Within minutes, they come up with a flurry of possible preparations that could elevate multiple courses.

For years, the idea of Trentina has been circulating in Sawyer’s head like boiling pasta water. His wife and partner, Amelia, has family from Trentino, a region in northern Italy that served as the inspiration for their new Italian restaurant. Last fall, Sawyer, Danko and other team members flew to Trento, the capital city of Trentino, to stage at restaurants there, and they came back with a bushel full of menu ideas.

Because Sawyer is a multiple James Beard Foundation nominee for Best Chef in the Great Lakes region, anticipation was high for this new concept. Many thought an idyllic Italian restaurant serving authentic peasant cuisine rarely seen in this country would be a dream. But Sawyer, who operates two downtown hipster spots (Greenhouse Tavern and Noodlecat), was aiming much higher than anyone thought. Fine dining during a time when the public and most chefs have succumbed to casual dining’s embrace? Why?

“When we opened Greenhouse [in 2009], the style of cooking we were doing was pretty new to Cleveland. It was a certified green restaurant, sourcing all of our produce and proteins from the Cuyahoga Valley,” he explained. “And when we opened Noodlecat [in 2011], there was no ramen in Cleveland. Today, what we do at both restaurants is de rigueur. So with the opening of Trentina, we wanted to reinvent ourselves. We may or may not be going in the direction the market wants to go, but that’s what makes it so exciting.”

Sawyer makes no apologies for catching everyone off guard. He understands that he was a major contributor to the casualization of upscale restaurants in this country, and he’s proud of the success he’s had at his tavern and noodle shop, both madhouses of frenetic energy. But he wants to be at the forefront of a more genteel fine-dining renaissance.

“If fine dining were to die with this generation, I would be very sad. I believe we are going to look back 10-15 years from now and be thankful we took this approach at Trentina,” he says. “We (independent restaurants) are fighting over 10 percent of the public’s dollars. The big guys (chains) are taking all the rest. If we manage to take that 10 percent to 20 percent, we’ve done our part. We believe introducing the public to a slightly more challenging cuisine will create an excitement that will help us grab a bigger share of consumer dollars.”

So far, that’s exactly what has happened, at least with the excitement part of the equation. During the 10 or so friends-and-family dinners held before the July opening, “people were going insane over a tasting menu that we created just to give the kitchen a chance to learn dishes,” says Sawyer.

Inside the tasting menu

“The original plan wasn’t to offer a tasting menu,” adds Danko, a Food & Wine People’s Choice Award winner, “but based on the positive reaction, all agreed a tasting menu was the way to go.”

If the idea of a tasting menu caught many off guard, what was more astonishing was the food coming out of the kitchen. How could the chefs who were creating overtly masculine, rust belt dishes like pig head with BBQ sauce at the tavern, produce beautiful, artful dishes like poached and chilled sea whelks at Trentina?

The answer to that question leads back to Sawyer’s James Beard Award nominations. The 34-year-old has something to prove. He can sling hash with the best of them, but Trentina is his evidence that he can also cook on a level far above most. It’s his bid to move beyond nominee status. Sawyer says none of this out loud, of course, but those who know him are witnesses to his restless hunger to excel.

The months ahead will tell if Trentina can take Sawyer where he wants to go. It will surely transport diners to a time when restaurant staffs were impeccably dressed; to a time when tableside service was prevalent; to a time when hushed tones in a dining room allowed diners to speak with ease to each other. Trentina, with its 32 seats, is a throwback unlike anything today’s younger diners have ever seen. Will they get it? Better yet, can they afford the $100 tariff for the 12-course tasting menu, which does not include tax, beverages or tip?

“Millennials are pounding on Trentina’s door for the opportunity to work here. They are different from the generations before them. They want to work and eat at a place that makes a positive impact on the world,” says Danko. “They get what we’re doing here [sustainable, farm-to-table]. Maybe they can’t afford to be a regular customer here, but this is where they’ll celebrate special occasions.”

The unfamiliarity of Trentina is exactly what makes it exciting. Beyond its formality, the restaurant’s Italian cuisine, for many, is uncharted territory.

“What a lot of people may not know is that Trentino is about 50 percent Germanic speaking,” says Sawyer, a 2008 Restaurant Hospitality Rising Star. “The style of cooking is much more sauerkraut than it is tomato sauce. That’s what intrigued me as a cook; to see the Italian sensibilities interpreted through the German microscope and the other way around. There are not many [upscale] restaurants in this country doing this style of cooking.”

Nevertheless, Sawyer is quick to point out the many parallels between Trentino and the Cuyahoga Valley, where Cleveland is nestled.
“The growing seasons between the two regions are quite similar, and we share so many indigenous ingredients, including freshwater fish, apples, farro and tomatoes,” says Sawyer. “We don’t have to import a lot of ingredients to pull this authentic cuisine off here at Trentina because the landscapes and climates match up beautifully.”

The excitement of eating thought-provoking food like this at Trentina is heightened by the theatrics that surround it. The highly trained staff performs all manners of tableside service, including fileting fish and searing beef carpaccio on an ember from the kitchen’s wood-burning oven.

“Dining on this level isn’t just about how it tastes. It’s about how the food is presented, how it smells, how legitimate the ingredients are,” says Sawyer, a 2010 Food & Wine Best New Chef. “It’s about combining the senses into an experience, including touch.”

This culinary theatrical production takes place in a jewel box space in the heart of Cleveland’s University Circle, a dynamic neighborhood that encompasses a historical society, a natural history museum, a museum of contemporary art, the botanical gardens, an institute of art, an institute of music, the Case Western Reserve University campus and University Hospitals. Just blocks away is Severance Hall, home of the Cleveland Orchestra. If one is going to roll the dice on a new fine dining restaurant, the Sawyers may have found the perfect spot.

Amelia took advantage of Trentina’s highbrow location by collaborating with the Museum of Contemporary Art to create a chandelier featuring iridescent beads strung together by Clevelanders. The community art project hangs from the restaurant’s vaulted ceiling. She was also instrumental in creating the restaurant’s look with local designers, and even created a piece of art that hangs on a wall.

Contributing to Trentina’s ideal location is a next-door boutique hotel called Glidden House, which has 80 rooms, 10 of them suites, all costing under $200 a night.

“Having Glidden House next door makes Trentina a destination restaurant where people from Pittsburgh, Buffalo, Youngstown, Columbus and other cities just hours away can have a Chicago- or New York-style weekend getaway for a fraction of the cost,” says Sawyer. With that said, he notes that there are plenty of sophisticated diners in Cleveland to keep Trentina humming. After all, he adds, the restaurant needs only 200 guests a week to cover its nut.

Still, it’s nice to have a trump card like the Glidden House. Because Trentina is so small, it does not have a bar, so beautiful cocktails are made tableside from a rolling cart by beverage director Nate Hoffman. Sawyer says plans are in the works for Trentina to operate the gorgeous bar at Gliden House, which is listed on the National Historic Register of Historic Places. It will allow restaurant customers to enjoy a drink there before dining next door at Trentina.

Luckily for those who can’t or choose not to participate in Trentina’s tasting menus, an outdoor patio area offers a casual a la carte menu. The restaurant also provides a similar casual menu inside and out during lunch service, which began in early September and is designed to target the 40,000 people who work in the surrounding medical and academic facilities. The offerings are sophisticated, yet more playful, including Cavatappi & Cheese, a Trentino-style mac-and-cheese dish, and a Porchetta Sandwich with sauerkraut, fennel and moustarda. You won’t find either at Olive Garden.

Only time will tell if Trentina’s seduction of the upscale market will be a long-lasting affair. If not, Sawyer is prepared to woo customers in a less formal way. Meanwhile, one of America’s most talented chefs will continue to motor between his uptown and downtown restaurants, mesmerizing diners every way he can.