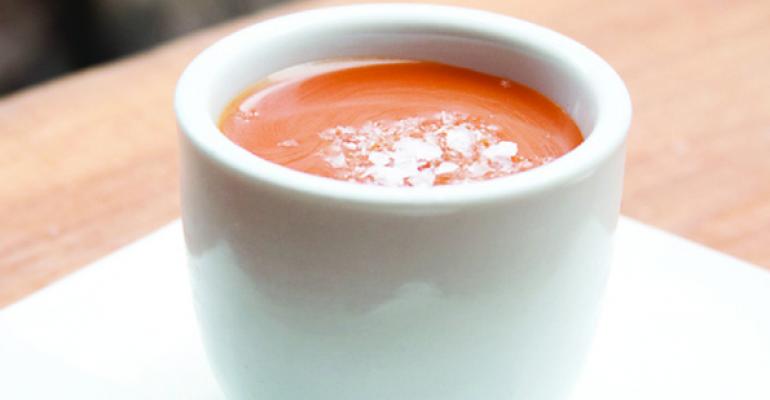 Sometimes greatness is thrust upon you. That’s what happened to Matt Danko when the former pastry chef at The Greenhouse Tavern in Cleveland moved on. Chef/owner Jonathon Sawyer asked Danko, at the time a line cook, to fill the vacancy. A year later, Eater.com named Danko to its list of “Young Guns Class of 2012” on the strength of his unusual and wildly popular desserts. So, clearly, this is a guy who knows how to take advantage of opportunity, and that’s exactly what he did when a 20-pound bag of unused popcorn sat around the restaurant (long story, don’t ask). Danko kiddingly told Tavern executive chef Brian Goodman he would use the popcorn to make pot de crème (unaware that pastry chef goddess Hedy Goldsmith pioneered the use of buttered popcorn in desserts). “Chef Goodman kept razzing me until I made the dessert. It took a bunch of tweaking, but about six recipes later I came up with what’s on the menu now.” The popcorn pot de crème is one of the Tavern’s best sellers and one customers won’t let Danko take off the menu. 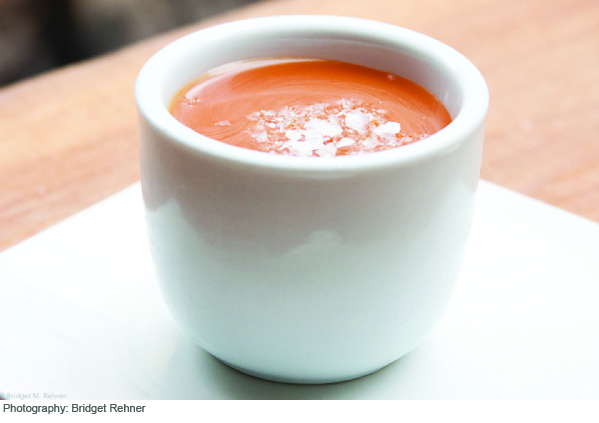 Begin by small dicing the butter and placing it into a pot along with the popcorn, then place on high heat. Pop the kernels until the pops come about three seconds apart. Immediately remove from the pot and place into a bowl.

Add the cream, milk, half the sugar, salt, and popcorn to a large pot, stir, and place over medium high heat. Once the mixture reaches a simmer, turn heat off and strain it into a pitcher. Add vanilla and stir to combine.

Place egg yolks into a bowl with the remaining sugar and whisk to combine. Using a ladle, temper one third of the cream into the yolks while constantly whisking. Then return the egg and cream mixture back into the remainder of the cream and stir to combine.

At this point the base is ready to bake or can be refrigerated and baked within two days.
If baking immediately, set up a deep baking pan and line with paper towels. Then place ramekins in the baking pan—as many as will fit snugly so that each lies flat on the bottom of the pan. Fill each cup with the base—about one quarter of an inch from the top. Fill the pans with water until the ramekins are halfway submerged. Cover with parchment and foil, set in an oven preheated to 325° and bake for 50 to 55 minutes.

If baking base from a cold state, set the pot de crème as if baking immediately, but allow to bake for at least one hour.

Remove from oven and once the custard has set, place on a sheet tray in the refrigerator to cool. Once cool, cover each pot du crème with plastic wrap and return to cooler until ready to plate.

* When set, the custard will still wiggle in the ramekins slightly, but will not appear watery. If pulled too soon, continue to bake, checking every five  minutes until the custard is set. If pots de crème appear swollen at all they have, unfortunately, been overcooked, have curdled and should be discarded.

Combine sugar, water and lemon juice in a pot over high heat. Cook until a light amber color develops. Remove from heat and add cream and butter, stirring until smooth and emulsified. Caution:  During this part of the process caramel will be extremely hot and volatile. Cool and store at room temp. Yields 3⁄4 of a quart.

To serve pots de crème, remove from cooler and top with about 11⁄2 Tbsp. of caramel, or until top is completely coated. Sprinkle a small amount of sea salt on top and serve.