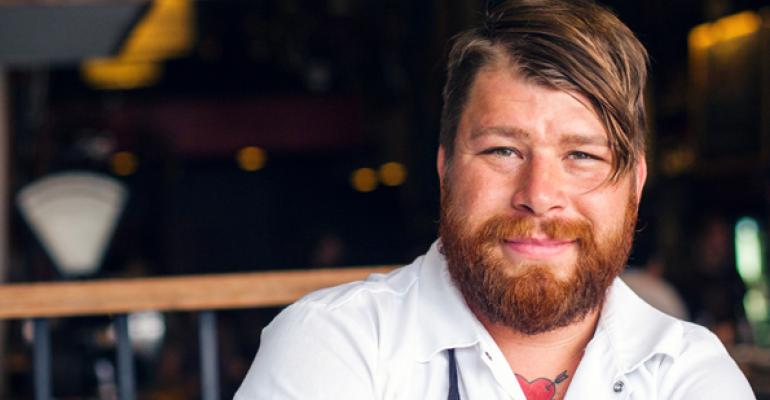 This is part of Restaurant Hospitality's special coverage of the 2012 MUFSO conference, which took place Sept. 30-Oct. 2 at the Hilton Anatole Hotel in Dallas.

Cleveland-based chef/owner Jonathon Sawyer is a human dynamo, a bundle of exuberance who is always on the lookout for his next big idea while nurturing the ones he’s already gotten off the ground. In four short years he’s launched Greenhouse Tavern, a Parisian-influenced bistro named a Best New Restaurant by Bon Appetit in 2009, followed in short order by the Japanese-fusion Noodlecat and a spinoff Noodlecat kiosk in the city’s historic public market, and Sawyer’s Street Frites, a stand that opened recently in the Cleveland Browns football stadium. He’s getting ready to open Trentino, a regional Italian restaurant, in the city’s busy medical and arts corridor, and he’s negotiating for a second sports arena idea at Quicken Loans Arena, home of the NBA’s Cavaliers.

Sawyer opened a lot of eyes with his flagship Greenhouse Tavern in 2009. The first nationally certified green restaurant in the state, the casual contemporary space is filled with reclaimed items. “The big fun of building a new restaurant is making it feel like you’ve been there for 20 years,” he said.

The green building aspect was cool, sure. But Sawyer really drew a line in the sand with his bistro/tavern menu, which spotlights many ingredients from the nearby Cuyahoga Valley and regional artisan producers, right down to the soft drinks. And for a heavily working-class market like Cleveland, it takes a lot of chances. Hand Ground Beef Tartare, a mainstay, is not exactly everyday fare. Ditto Foie Gras Steamed Clams, a luxurious and deceptively simple dish that ended up on the Food Network television program The Best Thing I Ever Ate.

“It’s the epitome of what we do best: Take five or six ingredients, cook them properly and the result (elevates them). It’s a showstopper in the dining room,” Sawyer said.

The chef also challenges his staff to figure out ways to get the most out of their ingredients, a philosophy that put half pig’s heads on the menu following a staff contest. The novel “cuts” sold out the first night; today, Greenhouse sells about 40 a week.

Noodlecat, Sawyer’s next project, was inspired by affordable ramen houses he had patronized while working in New York. He spent three weeks in Japan sampling more than 60 bowls of noodles before returning to dream up his menu, which he refers to as a Japanese-American mash-up. The experience was eye-opening.

“The reverence for ingredients there is pretty amazing,” he recalled. The visit also convinced him to outsource noodle making to a local artisan pasta maker and concern himself with the embellishments. “I could try my whole life to make perfect buckwheat noodles, and I would never do it. So we do the best with what we have.”

True to his no-product-wasted rule, one of Noodlecat’s mainstays evolved from simple chicken bones.

“I love properly fried chicken, and I don’t really throw anything away. So I decided to make chicken stock from the bones, and the flavor from that fried chicken somehow really stayed in the broth,” he recalled. The end product, “Roscoe's” Fried Chicken & Ramen, a concoction of fried chicken, butter, hot sauce, maple syrup, greens and fried chicken broth, pays homage to Roscoe’s House of Chicken and Waffles, a Southern California institution.

The Noodlecat kiosk at the market, which features an abbreviated menu, has also provided a perfect spot for Sawyer’s crew to sell house-made ketchup, soy sauce, pickles and vinegar. Sawyer said he sometimes wishes he had opened the stand before the restaurant. “It’s much easier to manage 65 square feet than 2,000 square feet,” he reasoned.

To research his latest restaurant, Trentino, he and his chef each will have spent about 40 days scouring that region of Italy for ideas. He chose to focus on that region because “when we develop concepts we don’t want it to be a regurgitation of something we’ve done elsewhere, and we want it to represent our area,” he explained. Trentino, in Northern Italy, sits at about the same latitude as Northern Ohio.

Unlike many prominent chefs, Sawyer doesn’t lay down the law and expect his cooks to obey. He encourages collaboration and creativity among trusted staffers, he’s a strong believer in giving chefs a stake in the business and he rewards midlevel employees with bonuses. When the restaurants do well, they all stand to win.

Sawyer said “with the right help and the right partners,” he could definitely see duplicating some of these concepts in other markets. A decade from now, he’d still like to be expanding his company and thinking of new ideas, “but I don’t want to be expediting at the Greenhouse Tavern on a Saturday night.”