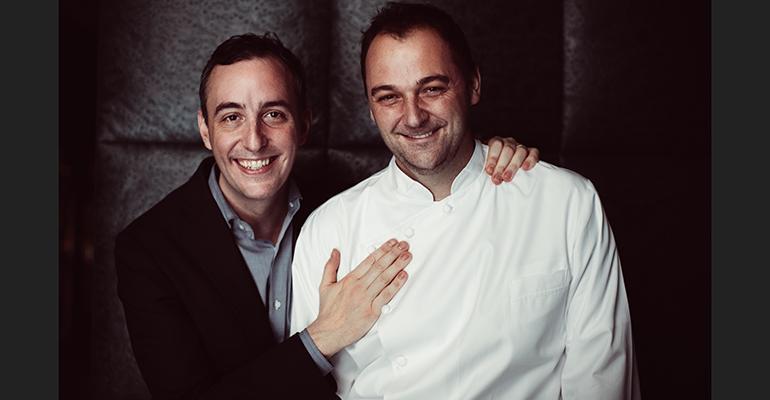 Restaurateur Will Guidara and chef Daniel Humm are scheduled to open a new concept called Davies & Brook in the famed Claridge’s hotel in London this summer, hotel officials said Thursday.

The partners, whose New York-based Make It Nice Hospitality group includes Eleven Madison Park and three locations of the NoMad concept, have long hinted of a move to London, which will be their first step outside the U.S. Guidara and Humm are also planning a new fine-dining project at 425 Park Ave. in New York City, set to open in 2020 or 2021.

Davies & Brook, named for the cross streets where Claridge’s is located in London’s chic Mayfair district, was described by hotel officials as “a fine-dining restaurant without pretense that embraces the heritage of its location with a contemporary sensibility.”

At the helm as executive chef at Davies & Brook will be Dmitri Magi, who was chef de cuisine at Eleven Madison Park, but details beyond that were not revealed.

“The history of Claridge’s and the responsibility that comes with opening a restaurant within those walls is not something we take lightly — it’s an opportunity we’re truly humbled by and we can’t wait to open our doors later this year,” said Guidara in a statement.

In an Instagram post, Guidara said the two fell in love with Claridge’s after staying there while in London to receive a World’s 50 Best Restaurants award for Eleven Madison Park.

“I fell in love the moment they opened the front doors for us,” he wrote, but not because of how “over-the-top gorgeous” the rooms, service or even the old-school elevator operator were.

“It was because there, at that storied hotel, I saw a brand of hospitality that felt so familiar to me, so aligned with our own,” he said. “They took what they did so seriously, but they didn’t take themselves too seriously. They were running one of the greatest hotels on the planet, and you could tell they were having a blast doing it.”

Claridge’s, founded officially in 1856, is part of the Maybourne Hotel Group, which also includes The Connaught and The Berkeley. Claridge’s went through a major renovation, starting in the late 1990s, and has been home to restaurants such as Gordon Ramsay at Claridge’s and, most recently, Fera.