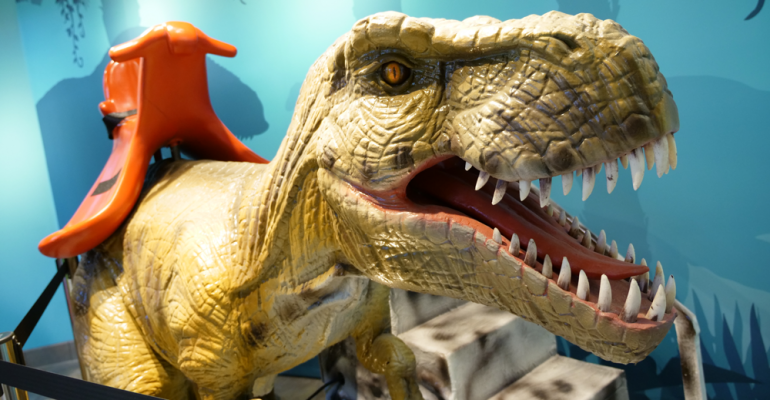 Sweetosaur offers decadent desserts of “Jurassic proportions.” The concept first opened on May 19 at Galleria at Tyler, a shopping mall in Riverside, Calif., and touts a bevy of dinosaur-themed milkshakes, rolled ice creams and most recently, versions of the Wafflesaurus Rex — a patent-pending T-Rex-shaped waffle filled with ice cream.

Rachel Kanter and her husband Javier Santos co-founded the dino-centric store, taking inspiration from her family’s shared appreciation for the reptiles. Her mother owns Wonder of Dinosaurs, a dinosaur-themed children’s museum in Redondo, Calif. “Sweetosaur was inspired by my love for dinosaurs and the desire to do a whole themed store based on that concept,” stated Kanter.

How has the response to her dino-desserts been? Overwhelming positive across all age groups, according to Kanter. “Dinosaurs just fascinate people and almost every age group grew up with some sort of iconic dinosaur centric show or movie.”

Following the success of the first store, Kanter and Santos plan to open a second Sweetosaur unit this November in Torrance, Calif.