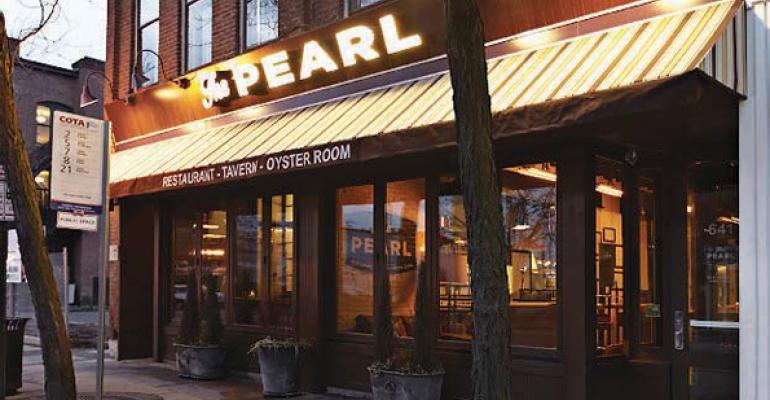 <p> Mitchell put The Pearl into a promising spot in the bustling Short North Arts District in Columbus.</p>
Archive

Smart business moves, to be sure. But where are the new concepts? Mitchell has one of the most fertile concept development minds in the business, but it’s been five long years since he and his CMR team have opened a new one. Which is why the restaurant world was paying close attention this February when CMR’s new gastropub, The Pearl Restaurant, Tavern and Oyster Room, began serving in Columbus’ Short North Art District.

Gastropubs are a new segment for Mitchell. Why open one now?

“Great food is really our form of entertainment in Columbus, so you have to continue to strive and push yourself to do better and to accept change because the culinary scene is constantly changing around us,” Mitchell says. “The Pearl brings to the table some new ideas and unique twists on food and beverage that people haven’t seen yet in this city. We’re very serious about the restaurant, but it isn’t a serious restaurant; it’s a place where you can go and have fun and try new beers and cocktails.”

Mitchell describes his new restaurant’s location as so enticing that it’s the first time in his career that he signed a lease without knowing exactly what he’d put into the space. The Pearl’s nearby neighbors in the Short North include a just-opened 532-room Hilton and, coming soon, 135-room boutique hotel The Joseph. Throw in the nearby Columbus Convention Center and the sprawling Ohio State University campus just a mile to the north and it added up to a compelling opportunity. Even better, CMR already operated a unit of its standout Italian concept Marcella’s just one block away.

Mitchell could have gone with something from his stable of proven concepts. CMR’s portfolio includes a number of one-off independent-style restaurants clustered around Columbus, plus multiunit brands that operate on a national scale. Right now, the company has eight concepts and runs 18 restaurants overall. The primary growth vehicle is Ocean Prime. It has 10 units across the country and has announced new locations in Philadelphia and Beverly Hills. Single-unit operations include Cameron’s American Bistro; Cap City (a “fine diner” with two units in suburban Columbus); fine dining spot M; Marcella’s Italian Kitchen, which has two units; Martini Modern Italian; and Molly Woo’s Pan-Asian.

There was plenty to pick from here. Alternatively, since Mitchell’s five-year no-compete on steakhouse restaurants that was part of the Ruth’s Chris deal has just expired, some thought he’d jump back into the steakhouse game in Columbus.

But even with all these options, Mitchell went for something new. He and his team traveled across the country to find inspiration and The Pearl was the result.

Mitchell, a Culinary Institute of America grad who spent plenty of time cooking on the line in the early part of his career, is a fan of the gastropub concept. He points out that The Pearl serves tavern food, but it’s tavern food made with higher-end ingredients and advanced culinary techniques.

Inside The Pearl's menu

Dessert choices are limited to a rotating selection of fresh-made pies.

The Pearl isn’t especially long on its supply of suds—eight beers on tap, 40 in bottles—but provides an admirable depth of beer knowledge. Every server and bar chef is a certified second-level cicerone, adept at pairing beer with food. There’s a dandy wine list, too, with 10 whites and reds by the glass and 20 of each in bottles.

The Pearl barrel-ages cocktails using an in-house infusion locker, too, starting out with margaritas and Manhattans. Bar chefs also make their own punches, sold at $10 for an individual serving and $38 for a bowl that is ladled up tableside and is designed for parties of four or more.  Current options include Bourbon apple punch (Bulleit Kentucky Bourbon, Calvados, Local Cider, Housemade Spice Syrup, Baked Apple Bitters) and  Citrus punch (Ketel One Citroen, Absinthe, Lillet Blanc, Fresh Orange and Lemon Juice, Blueberry Bitters).

The Pearl won’t be Mitchell’s newest concept for long.  He’s just getting warmed up. CMR is already at work on a polished casual, a steakhouse and a farm-to-table concept. We can’t wait to see how this trio of  new concepts plays out.