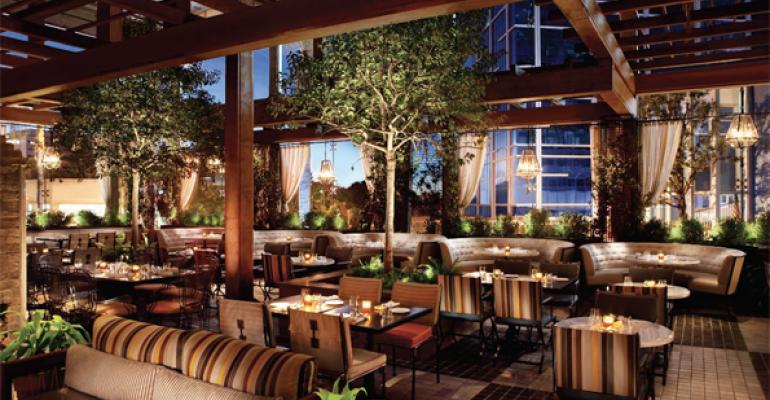 <p> It&rsquo;s tricky to create a Tuscan farmhouse vibe in a Sunset Boulevard setting. IDG pulled it off with its RivaBella design.</p>
Trends>New Restaurant Concepts

RivaBella: Italian with an edge

A classic cuisine, a star chef, a gorgeous dining room, a can’t-miss location on West Hollywood’s Sunset Strip—putting together a restaurant like the new RivaBella would be the capstone of almost any restaurateur’s career. But it’s just the most recent in a string of powerhouse operations developed by Lee Maen and his Innovative Dining Group (IDG) partners. The company has few peers when it comes to creating nightlife-driven restaurants. But this fine-dining-focused new one, which opened in mid-January, breaks the mold.

That’s because Maen and company went the celebrity chef route at RivaBella. The restaurant’s executive chef/partner is Gino Angelini, whose top-rated and still-going-strong Angelini Osteria is located just three miles away. At RivaBella, he’s putting his proven lineup of classic Italian dishes on display alongside new creations that reflect the edge and energy that are hallmarks of an IDG operation.

“As longtime fans of chef Gino Angelini, we are proud to partner with him on RivaBella, marrying his culinary philosophy with IDG’s contemporary and exciting approach to dining,” says Maen.

Angelini was quite a catch. A native of Italy, he’s long been regarded as the leading Italian chef in Los Angeles. He brings a level of culinary gravitas that multiconcept master IDG hasn’t had before.

They’ve done fine without it. The partnership has nine restaurants in Los Angeles, including three locations of its Sushi Roku concept, a pair of BOA steakhouses, and single units of Katana, Robata Bar and Delphine. IDG also operates Sushi Roku restaurants in Las Vegas and Scottsdale, AZ. IDG opened its first Italian-themed eatery, Soleto Trattoria & Pizzeria, in downtown L.A. last summer, prior to opening RivaBella. All have excellent food, but equal emphasis has been placed on cultivating a cool, contemporary scene.

RivaBella offers most of these same elements, but presents them in the context of a chef-driven fine-dining experience.

“The menu for RivaBella is simple, delicate and light, emphasizing good, quality ingredients,” Angelini says. “I am ready for something new, but I still believe people need to know what they’re eating.”

He came up with plenty of new creations for RivaBella’s 37-item menu.

In contrast, several items are signature dishes that come straight from Angelini Osteria. Sure, it’s unusual to see best-sellers from one thriving restaurant reproduced wholesale on the menu of another. But what would have been the point of asking Angelini to come up with different versions of classics that, among other things, earned him Zagat’s No. 1 ranking among L.A. Italian restaurants five years in a row?

It’s all prepped and served in an 8,000 sq. ft.-space on Sunset Boulevard that was once home to the flagship unit of long-running burger chain Hamburger Hamlet. Maen worked in commercial real estate before tackling the restaurant business, and his eyes must have lit up when he heard this space was coming onto the market. It’s located directly across Sunset Boulevard from IDG’s thriving BOA Steakhouse, so Maen knew the site’s potential immediately.

RivaBella has a stylish Tuscan farmhouse design that holds special appeal to its patrons’ California sensibilities. A retractable roof covers roughly two-thirds of the dining area, enabling customers to dine outside even in the winter months.

The design challenge was to create a space that captures the vibe of both a traditional Italian fine dining restaurant and an energetic IDG operation.

How did they pull it off?

“Instead of simply re-creating the past, we provided authenticity through furnishings, finishings and details, and also introduced a more contemporary California look that holds true to our design aesthetic,” IDG Partner Philip Cummins explains.

It wouldn’t be an IDG concept without a sophisticated bar program, and RivaBella lives up to that challenge. Both the 150-bottle wine list and hand-crafted cocktail lineup offer clever twists on American and Italian classics.

RivaBella is a huge restaurant, yet fills up only part of the old Hamburger Hamlet space. There’s plenty of room in the building—roughly 5,000 square feet— for something else.

The IDG partners have already announced what that something else will be. It’s Chi-Lin, a “new Chinese” restaurant IDG will run in partnership with Hong Kong filmmaker/restaurateur Cecile Tang.

Maen notes that both new restaurants were built out at the same time and could have opened their doors almost simultaneously. But IDG chose to open Chi-Lin later so neither restaurant would steal the other’s thunder. Chi-Lin is scheduled to begin serving in late April.

Tang is the proprietor of a Los Angeles fine dining restaurant called Joss. It’s located a couple of miles down Sunset from the BOA/RivaBella neighborhood. Joss serves refined traditional Chinese food. Thus the partnership with Tang gives IDG entrée into another classic cuisine that comes prebranded thanks to its close association with a highly regarded (and close by) Los Angeles restaurant.

What is perhaps most interesting about the RivaBella partnership is the synergy it creates. IDG can now present knockout cuisine from a well-respected chef to its nightlife-loving customer base. Angelini gets a bigger stage that allows him to reach a trendier audience. It’s a smart business model and it’s no wonder IDG thought it up first; expect to see other operators follow suit soon.