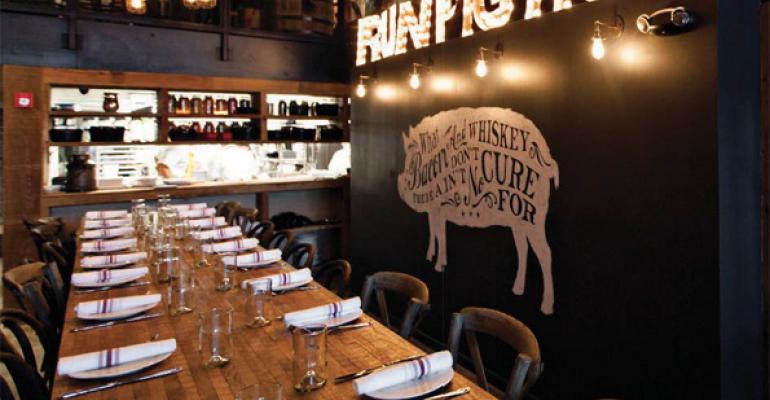 John Kunkel didn’t have anything left to prove in the restaurant game. He’d already played it as well it can be played, selling fast-casual burrito concept Lime Fresh Mexican Grill to Ruby Tuesday for $24 million in 2012. Time to kick back and enjoy life? Not Kunkel. He put his Miami-based 50 Eggs company into overdrive instead, rolling out three monster concepts during the past two years. The newest one, Swine Southern Table & Bar, opened in Coral Gables this past March.

Swine is loosely similar to Kunkel’s first full-service venture, Yardbird Southern Table & Bar, which debuted in South Beach in 2011. The big difference: Swine’s menu is pork-centric in contrast to Yardbird’s chicken-focused offerings. In between these two came his South Beach Thai restaurant Khong River House, which began serving just last December. It serves the authentic cuisine the 41-year-old Kunkel first discovered while studying martial arts in Thailand when he was in his early 20s.

All three ventures ooze the swing-for-the-fences spirit that’s the hallmark of trend-setting independent restaurants. But why would Kunkel expand at such a breakneck pace when he already had $24 million in the bank?

“The sale of Lime allowed us to be independent of anyone or anything,” Kunkel tells Black Book. “From a creative perspective it was an amazing feeling. As for the money, I put it away and never touched it. In terms of everyday operations, that sum hasn’t changed how I go about things. I still operate from that old standpoint of ‘how in the world am I going to make my car payment this month?’”

It didn’t take Kunkel and 50 Eggs long to make an impact with Yardbird, which serves authentic Southern cuisine in a hip contemporary setting. The restaurant was short-listed for the 2012 James Beard Awards in the “Best New Restaurant” category. Yardbird chef Jeff McInnis is a finalist for Best Chef-South in the 2013 Beard Awards. Khong River House is no slouch, either; it became a semi-finalist for the 2013 “Best New Restaurant” Beard Awards just a few months after it opened.

This much success made expectations for Swine Southern Table & Bar sky-high. But 50 Eggs delivered. A couple of signature dishes from Yardbird migrated to Swine—chicken and waffles and shrimp and grits. But the rest of the menu is brand-new, with many of its items being cured, smoked and wood-fired in-house.

Growth in the works

There are nine side dish “Fixins” items whose prices range from $6 (hush puppies) to $10 for either Mac & Cheese or “Peas N’ Carrots” (glazed baby heirloom carrots, sweet buttered peas, fresh herbs, Florida citrus). Five dessert choices, such as homemade pie of the day or red velvet cake, cost either $9 or $10.

The supper menu has just 30 items in all, mostly simple, straightforward fare. Good thing, because the 11-page beverage menu offers a staggering array of cocktails (some bottle-aged onsite), whiskeys, rums, wines and beer that almost compels patrons to explore a new drink. No matter what the customer orders, he or she is going to think they’re missing out on a dozen other great options. All the better to bring them back another time. Hats off to 50 Eggs for having the vision to offer a list the size of this one in a 100-seat restaurant. Also hats off for having the working capital to source and stock the vast array of beverage options on its list.

Throw in the cool space where the design mixes old-school Deep South elements with contemporary touches and it’s easy to see why Swine is keeping the 50 Eggs winning streak intact.

So is Kunkel ready to take a break after the overwhelming success of Swine? No chance. He admits to having ambitions that extend beyond South Florida. Units of the Yardbird concept could soon be popping up everywhere from Las Vegas to Dubai. But 50 Eggs’ next two projects will be located on its home turf in Miami.

First should come Khong Fuzi, which Kunkel describes as a “late-night noodle and bun shop.” That will be followed by Test Kitchen, designed to be a collaborative haven for local chefs and an instructional center for underprivileged kids. It will be located in 50 Eggs’ new corporate headquarters in midtown Miami.

The company’s mantra now: “No shortage of projects, at all, ever!” Kunkel tells Eater Miami. Given the level of multiconcept mastery Kunkel and 50 Eggs have demonstrated so far,  we can’t wait to see what he tackles next.