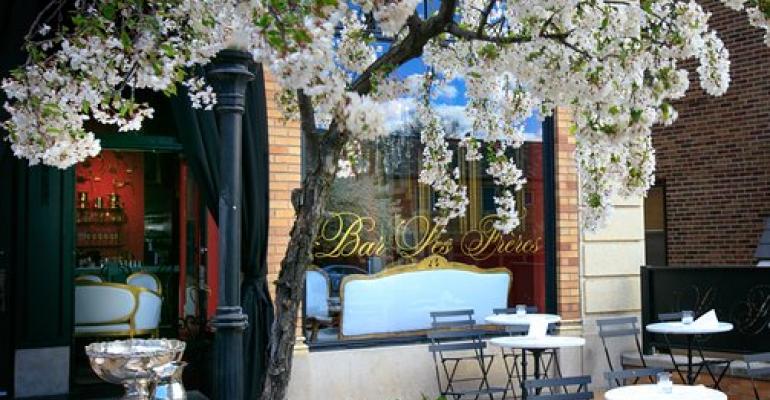 Bar Les Frères has a projected opening date in June 2022. The restaurant will seat 36 inside and 24 outside on a newly constructed terrace patio.
Trends>New Restaurant Concepts

The couple behind the acclaimed Vicia is expanding in the St. Louis, Mo., suburbs

Celebrated restaurateurs Michael and Tara Gallina are growing their restaurant holdings and are planning a summer re-opening of Bar Les Frères in the St. Louis suburb of Clayton, Mo.

The couple, along with new partner Aaron Martinez, recently purchased the French bistro, which had closed in March 2020 during the COVID-19 pandemic. They are working to revamp both the space and the food, including interior updates and menu tweaks.

"It's our second time taking over a beloved neighborhood restaurant and bringing it back to life," co-owner Tara Gallina said. "We're creating a new chapter for this restaurant."

The Gallinas have made a name for themselves in the fine-dining world. In 2017, the couple opened the vegetable-forward Vicia in St. Louis, which has earned acclaim. Vicia in 2018 was named a James Beard Award semifinalist for Best New Restaurant, and in 2022 the restaurant earned national nominations for Outstanding Wine Program and Outstanding Bar Program. Chef Michael Gallina is a two-time Beard nominee for Best Chef: Midwest.

Married since 2015 —after meeting while working at the New York restaurant Blue Hill at Stone Barns — the Gallinas in 2019 also took over St. Louis neighborhood spot Winslow's Home and turned it into Winslow's Table, a farm-fresh restaurant with a retail component selling local products and artisanal goods.

With the addition of Martinez as a partner, the concepts are now under their St. Louis-based restaurant group Take Root Hospitality.

Coming soon is a new restaurant concept: Taqueria Morita, with a planned late May opening in a garden pavilion at Vicia. Taking its name from Morita chiles — peppers integral to salsa — it will feature tacos and other seasonal dishes, with vegetables also taking a starring role.

At Bar Les Frères, the kitchen will continue to offer favorite French classics, like gougères (French cheese puffs), oysters and French 75 cocktails, while expanding the choices with new items including chilled seafood, salads, charcuterie and cheese.

Bar Les Frères also will focus on its wine offerings, expected to number 100 bottles or so, and all of which will have some connection to France, whether they come from the country itself, are a French varietal or are made in a French style, she said.

"I call it a wine bar with amazing food," she said. "The wine will be the star of the show."

In a somewhat unusual move, diners will have the opportunity to order two-ounce tasting sizes of every wine on the menu except sparkling wines, compared to many places that offer tastings from a just a limited selection, she said. To keep the pours fresh, the restaurant will use the Coravin system, designed to allow pouring through a needle to avoid removal of the cork.

Guests also will see changes to the building itself, such as the addition of a custom banquette, sage green wall coverings and new drapery that will take into account the tall ceilings and visible pipes.

"It's a 100-year-old building that was a shoe repair business," Tara Gallina said. "We were wanting to hang a lot of really long drapery to cover up the pipes and create a soft surface."

Bar Les Frères has a projected opening date in June 2022. The restaurant will seat 36 inside and 24 outside on a newly constructed terrace patio.