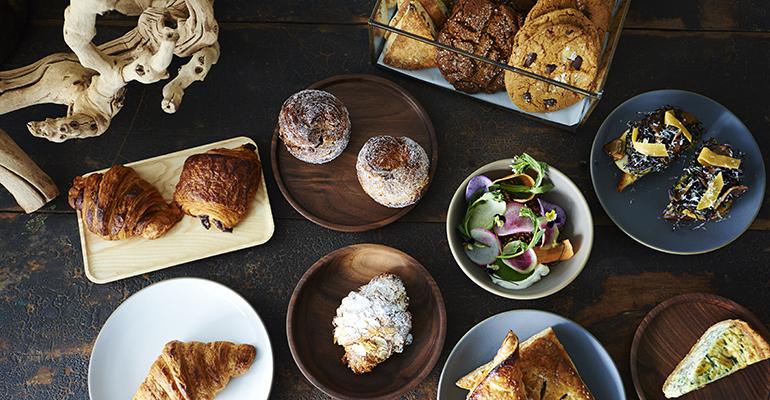 Celebrating earth’s bounty in the heartland

Blue Hill alums open Vicia in St. Louis with vegetables in the spotlight

It’s a pretty memorable occasion to host a James Beard Foundation celebrity chef dinner. Even more extraordinary is to do it on the opening night of a new restaurant.

That is what happened in March when Michael and Tara Gallina opened Vicia in St. Louis, their new vegetable-forward concept. The Beard dinner had originally been scheduled for what they thought would be months after the launch, but construction delays pushed their projected opening date back. Still, said Tara Gallina,  “It was the best possible opening night we could have had.”

Nashville chefs Owen Clark of Rolf and Daughters; and Ryan Poli of The Catbird Seat were there. So were St. Louis “new friends” Kevin Nashan of The Peacemaker and Sidney Street Café ; Mike Randolph of Publico and Randolfi’s; and Ted Wilson of Union Loafers. Pastry chef Bobby Schaffer came down from Chicago.

Now the Gallinas are focused on carving out their own unique voice in St. Louis’ fine dining landscape — a voice that has been influenced somewhat by their time at the famed Blue Hill at Stone Barns in New York, where the couple met. Michael Gallina was chef de cuisine there and Tara Gallina was senior captain of the service team.

Married in 2015, the Gallinas moved to St. Louis, where Michael Gallina is from originally, to research restaurant concepts. They began with Rooster and the Hen, a series of pop-up dinners, which gave them a chance to experiment and test local tastes. It ultimately served as inspiration for Vicia.

Like Blue Hill, Vicia is a celebration of the thoughtfully cultivated farm, with a frequently changing seasonal menu. The name comes from the Latin word for vetch, referring to a leguminous cover crop planted to replenish nutrients into the soil.

The Gallinas’ goal is to “make sure that vegetables and fruits are delicious by being mindful of taking care of the soil. We wanted it to be a constant reminder of what is going on in our environment,” said Tara Gallina.

Though not a vegetarian restaurant per se, vegetables are featured in virtually every dish and sometimes in surprising ways.

For dessert: a rhubarb float with celery sorbet, buckwheat and poached rhubarb. The couple even mills flour fresh daily from whole grains, bought locally and from boutique growers across the country, for Vicia’s pastries and cookies.

The aim is to bring typically underutilized vegetables to the center of the plate. At Vicia, for example, ingredients like parsnips, rutabaga and kohlrabi get more playtime.

Still, meat eaters will find something to enjoy, such as the Rutabaga Carbonara, enriched with a pullet egg and SarVecchio parmesan, which is available with or without bacon; and a Berkshire pig entrée includes shelling beans, horseradish sauce, green garlic and arugula flowers.

“Sometimes we’ll run different dishes where vegetable isn’t as much of a focus.  In that case, we try to really celebrate different cuts of the animal,” said Michael Gallina.

The menu changes about two to three times a week. They always offer about three or four snacks, three starters, three main dishes, two desserts, and a cheese board. Certain dishes are mainstays, but the Gallinas may swap out a specific type of vegetable. For instance, tacos are always available, but one week the taco shell might be made of kohlrabi, while the next, daikon radishes.

The restaurant is designed to be a quick-service spot for lunch, with a rotating selection of soups, salads, sandwiches and quiche. Menu prices are about $13 to $14.

Dinner is full service, with a more elevated menu and innovative cocktail list. Prices range from $50 to 65 per person, including drinks.

The couple is incorporating some principles learned from their time at Blue Hill, including the managing of food waste, a passion of theirs. The dual concept helps fulfill that need. “Anything that doesn’t make it onto the dinner menu has a home on the lunch menu,” said Tara Gallina, adding that her husband even chars vegetable peels on the grill, then pulverizes them with salt as an accompaniment to some dishes. What can’t be used is composted.

Being vegetable-forward also allows them to achieve their goal of working directly with farmers. The Gallinas make it a point to source locally, another takeaway from their Blue Hill days.  In fact, they spent over a year connecting with and establishing a network of local farmers, who they now think of as partners.

The 54-seat restaurant has an open-kitchen design, along with glass walls to promote transparency and light.  Patrons on the 34-seat patio outside can watch the chefs prepare food over the wood-fired grill. Vicia is the first restaurant in St. Louis’ Cortex Innovation district, a fairly new community that is becoming the center of technology and innovation.

“There is a lot of growth and opportunity, and we felt like it was an exciting place to build the restaurant from scratch,” said Tara Gallina.