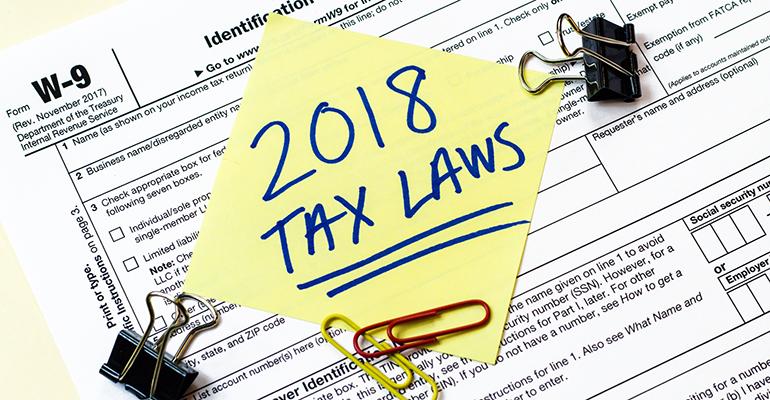 7 things restaurants should consider about taxes

These strategies could help you benefit from the new federal code

The Tax Cuts and Jobs Act of 2017 created some immediate opportunities for operators to boost their bottom lines, but it also ushered in a new environment where owners could benefit from reorganizing their businesses in some ways or reprioritizing planned investments.

“You have to be strategic about it and think it through,” said Gary Levy, left, managing partner of the consumer, hospitality and manufacturing practice at CohnReznick.

Some of the benefits of tax reform need to be weighed against others to minimize the overall tax expense, he said. Considerations might include the timing and magnitude of certain investments, whether or not to take on new debt, and how to structure certain licensing agreements. Operators should model how their tax structure would differ under various scenarios and weigh that against their overall business objectives, Levy said.

“One thing we always tell our clients is that you can’t let the tax code wag the dog, but you just have to be very conscious of it as you go forward,” he said.

While it might seem tempting for a pass-through to convert to a C-corporation in order to take advantage of the lower tax rate, that often will not always be the best option. In a C-corporation, the business is taxed at the corporate rate, plus, investors are taxed on the dividends that the company pays out.

“It's something I think you really have to look at and consider,” Levy said. “The issue really becomes how do you get the money out of the company if it's a C-corp?”

Among the other important changes operators need to consider are the new rules around depreciation.

While previously companies could deduct 50 percent of certain investments, they can now deduct the full investment. Investments that qualify for the bonus depreciation include short-lived assets such as furniture, fixtures and equipment, as well as certain building improvements.

Operators need to think about how they use this deduction, Levy said. The deduction reduces the Qualified Business Income (QBI) that pass-through entities use to calculate their taxes, so the 20-percent reduction that these businesses can take under the new rules will be reduced if they opt to take the bonus depreciation.

Companies that take advantage of the bonus depreciation also could end up having to add it back down the road if they sell the business, and they will have missed out on the higher deductions they could have earned on their QBI, Levy said.

“That's important, especially if you're a growth-concept restaurant that's got private-equity money behind you,” he said. “Should I take the bonus [depreciation], or not?”

The reforms doubled the expense limitation under the Section 179 deduction to $1 million, from $500,000, for certain additions to qualified assets. Section 179 of the tax code allows businesses to deduct the full purchase price of qualifying equipment and/or software purchased or financed during the tax year. The range of property that qualifies for the deduction has also been expanded to include roofs; heating, ventilation and air conditioning systems; and fire and alarm systems.

“If you're very heavily leveraged, that could be a problem,” Levy said. “If you are a growing restaurant company, building multiple restaurants, and you borrow a lot of money to grow, you may not be able to take your interest deduction.”

The new tax code makes it less economical to offer free meals to workers. While the cost of these perks previously had been fully deductible, now only 50 percent of the cost can be deducted for tax calculations.

Operators might also need to think about how to structure certain divisions of their operations if they offer licensing of their name or culinary talents to other entities. It is unclear if the fees earned from those aspects of the business will qualify for the 20-percent deduction that applies to pass-through entities, according to Cindy McLoughlin, left, leader of the hospitality industry practice at CohnReznick.

Meanwhile, although there had been speculation about changes in the Work Opportunity Tax Credit (WOTC), which encourages the hiring of disadvantaged workers, that deduction opportunity remains in place.

McLoughlin said the WOTC was a significant topic of discussion at a recent conference of the International Franchise Association she attended.

“A lot of franchisors are really helping their franchisees qualify for that — it’s a big focus for them,” she said.