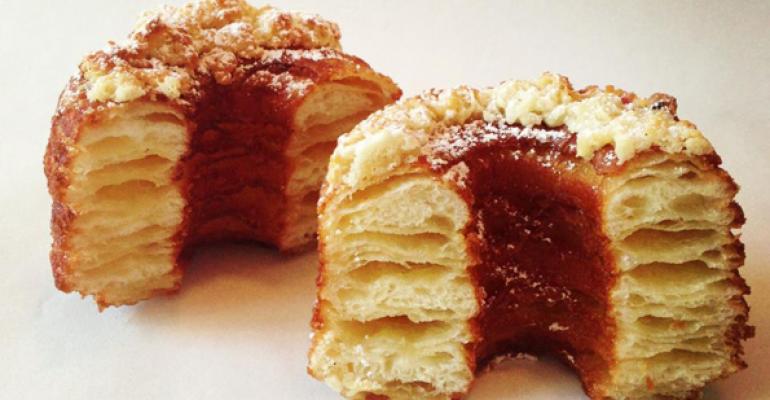 Could Cronuts play in Peoria?

Wondering what the next big trend in foodservice will be? We’ve got a candidate: the Cronut, a part-doughnut, part-croissant vanilla cream-filled pastry that’s become so popular in New York City that scalpers now sell them on the black market. If you run a bakery/café or have a morning coffee business that could use a boost, the Cronut could be for you.

But you’ll have to get up early if you want to see what Cronut-mania is all about. To buy one, you’ll have to join the other prospective purchasers who form lines an hour or two prior to the 8 a.m. opening of Dominique Ansel Bakery. That’s the place that creates 200 Cronuts each day and sells them for $5 apiece.

Proprietor Dominique Ansel makes many other high-end baked items at his shop in New York’s Soho neighborhood, and he just began offering Cronuts on May 10.

Already, his store has had to impose a three-Cronut limit in an attempt to stamp out a Craig’s List-driven black market where the price topped out at $40 per, delivered. Already, crowd control and irate, impatient patrons have become an unintended consequence of Cronut-mania at Dominique Ansel Bakery.

So why doesn’t Ansel just make more? It’s not that kind of bakery and Cronuts aren’t that kind of product. Cronuts are time-consuming to make and aren’t designed for mass production. If you’ve made raised doughnuts, you’re aware that they’re relatively quick and easy to make in large batches, except for the proofing step. If you’ve ever made croissant dough from scratch, you’re aware that it’s time-consuming and occasionally tricky, even in small quantities. The degree of difficulty for the Cronut-making process is said to lie somewhere in between.

Ansel, who has already trademarked the term “Cronut,” is surprised by the craze his creation kicked off. Here are his thoughts:

“I think because there's a cultural reference to American people with the doughnut and the croissant,” he tells Eater National. “Everybody knows what a croissant is, everybody knows what a doughnut is. But something that looks and tastes like both at the same time is something they've never seen before … Everything we do at the bakery, we try to be innovative, we try to create a lot of new things.”

Next up from Ansel: a lemon-maple variety of Cronut available all through the month of June.

Now the question becomes whether Cronuts, or knock-off versions of them, will catch on elsewhere in the country. We’ll probably find out the answer in a hurry, as it’s clear there could be big rewards for whoever is the first mover in any new market.

But could a national baked-good trend really follow from the work of just a single small store in New York City? Keep in mind that the Magnolia Bakery on Bleecker Street in NYC’s West Village neighborhood is considered to be the epicenter of the gourmet cupcake craze. Helped along by Magnolia Bakery’s exposure on the “Sex and the City” television show and other media mentions, cupcake mania endured for several years and still exists in some quarters today. Now you can get a Magnolia cupcake in Chicago, Dubai, Qatar, Beirut and elsewhere around the world.

For Cronuts, it’s foodie hipsters on social media and food bloggers who are helping the product gain exposure. We don’t know how far the Cronuts craze will go, but the lesson of the cupcake trend is that it’s early adopters who really make the money. If you produce from-scratch bake goods in your restaurant, or work closely with a bakeshop that could become a potential supplier of Cronut-style items, start experimenting with doughnut/croissant hybrids today.