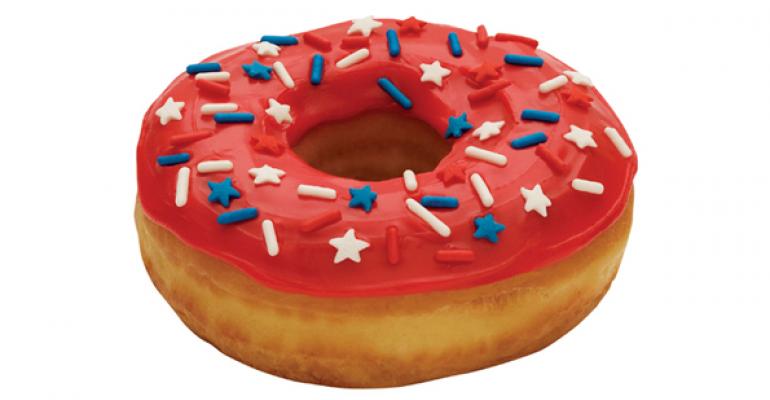 While some people are still debating whether doughnuts are a breakfast or a dessert, others are moving ahead into savory snack and spiked doughnut territory. One thing is for sure: Doughnuts are as hot now as they were during their previous comeback in the 1930s. The December 1933 issue of Restaurant Hospitality’s forerunner, American Restaurant magazine, advised readers how to  “Cash In On The Doughnut’s Popularity.” In that era, too, Americans were doughnut-conscious, although they were moving away from “the ‘sinker’—that heavy greasy doughnut of the good old days….”

Elsewhere around the country, doughnuts are paired with casual dining classics such as burgers or chicken.  At Federal Donuts in Philadelphia—where the menu includes coffee, doughnuts and fried chicken — the doughnuts are rolled in custom-seasoned sugar blends such as Turkish mocha and strawberry fennel. A range of creative topping flavors includes maple bacon, green tea sesame, and spicy peanut butter and jelly.

At Gourdough’s in Austin—a specialty doughnut spot housed in a vintage Airstream trailer—the trailer operation has inspired a restaurant where 23 different types of doughnuts will be offered along with burgers, appetizers and entrees. Gourdough’s has built its reputation by serving doughnuts fried fresh to order. Hungry customers can order a substantial doughnut like The Boss Hog ($5.50) that features pulled pork and potato salad, drizzled with honey barbecue sauce. Other choices include gooey dessert inspirations, like Cherry Bombs ($4.50), glazed cherry-topped doughnut holes with cinnamon, sugar and cake-mix topping.

In addition to savory snacks and enticing desserts, doughnuts may be drawing inspiration from cocktail menus, too. Delightful Pastries in Chicago recently introduced spiked doughnuts. Some of their Drunken Doughnuts might make you thirsty: Vanilla Bean with Vodka Custard, and Passion Fruit with Grand Marnier Jelly. Delightful Pastries is a Chicago French Market vendor, with a café and store location in Old Town Chicago, and a store in Jefferson Park.