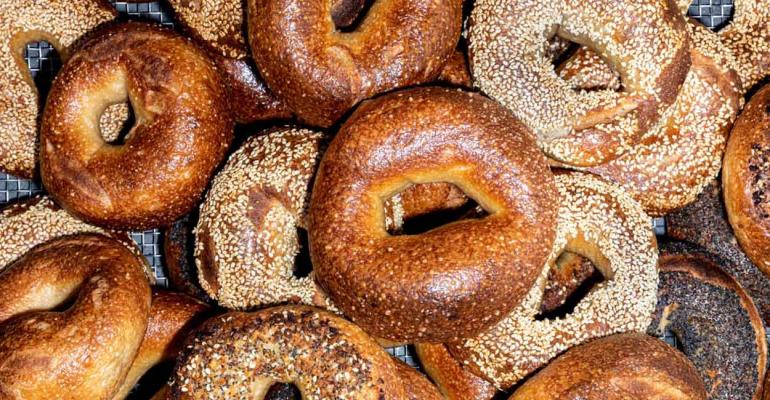 Brad Kent, who is a co-founder and chief culinary officer of the fast-casual Blaze Pizza chain, is using his knowledge of dough to open his own restaurant. Bagel + Slice is expected to debut in the Los Angeles neighborhood of Highland Park, where Kent himself lives, this month, focusing on savory baked goods as well as supporting the community and local agriculture.

A scientist as well as a chef, Kent’s career has ranged from developing food for space missions and working as a private chef on a yacht to running his own pizzeria before joining the Blaze team in 2012.

The new restaurant, which Kent said is inspired by his grandfather Abraham Kantrowitz, who owned a Jewish deli in Morristown, N.J., early in the 20th Century, will feature hand-rolled bagels following New York City traditions of boiling the bagels rather than steaming them, and then baking them in a hearth-style oven on boards lined with burlap. It also will serve pizza on whole grain, slow-fermented crusts with vegan options.

Bagel + Slice, which will offer counter-service only, with no seating, also will offer “gluten-friendly” pizza and bagels made with gluten-free flour that Kent developed. It will be baked and sliced on the same equipment as menu items containing gluten, however, so they are not suitable for people with celiac disease.

Related: How Mici’s automated pizza press technology is the key to the growing brand’s expansion

Prices will start at around $1.85 for bagels and $3.25 for pizza slices. Specialty bagel sandwiches include the Hottie, with egg, cheese, avocado and charred jalapeño peppers, and the Sam Reuben with pastrami-spiced smoke salmon, cream cheese flavored like Russian dressing and sauerkraut on a caraway-rye bialy.

Among signature pizzas will be a white pie with pistachio chimichurri and a photogenic daily "for the Gram" slice. Besides classic toppings, Bagel + Slice will also offer vegan almond ricotta, burrata and prosciutto.

The new restaurant will not be affiliated with Blaze Pizza.

Bagel + Slice has made a variety of commitments to its workers and community, and even declared that it will keep its profit margin at no higher than 15% to help keep prices low while also paying employees higher wages.

“We are committed to providing jobs for our community that pay better than minimum wage and hope to be able to offer exceptional employment benefits that would not normally be offered in a typical ‘small business,’” Kent said in a statement. “We are also committed to charging the lowest possible prices for the highest quality products that incorporate premium ingredients to make our very familiar foods accessible. Our commitment to a lower profit margin ensures that we can provide affordable, high-quality meals for ALL our neighbors.”

Additionally, Kent has committed to making his dough out of at least 10% of wheat grown and milled locally using regenerative agriculture practices, which help rebuild topsoil and sequester carbon to help mitigate climate change.

In another environmentally-friendly move, Bagel + Slice will use ozonated water, O3, a zero-waste disinfectant, instead of other cleaning agents, in its produce-washing, equipment-washing and hand-washing sinks as well as mop sinks, toilets and surface-sanitizing buckets.

The restaurant’s ventilation system also will be ozonated.

Bagel + Slice also has partnered with Occidental College to allow students to use their dining cards at the restaurant, and plans to offer rotating specials that tie into the school’s art exhibits. It also has committed to participating in the college’s composting program.

Although Kent remains affiliated with Blaze Pizza, which has more than 340 locations, he said he doesn’t expect the new concept to grow to more than “a handful of locations.”

“While our mission to have a positive impact on the communities in which we do business is best fulfilled by having more than one location, each one of our shops will be uniquely suited to that specific locale,” he says on the restaurant’s web site, adding that having multiple locations also will provide more opportunities for employees.

Additionally, multiple locations will allow Kent and his team to give more support to local organic and regenerative farmers, he said. The web site also indicates that collaborations along the lines of what are planned with Occidental College will also be part of the model of future locations.