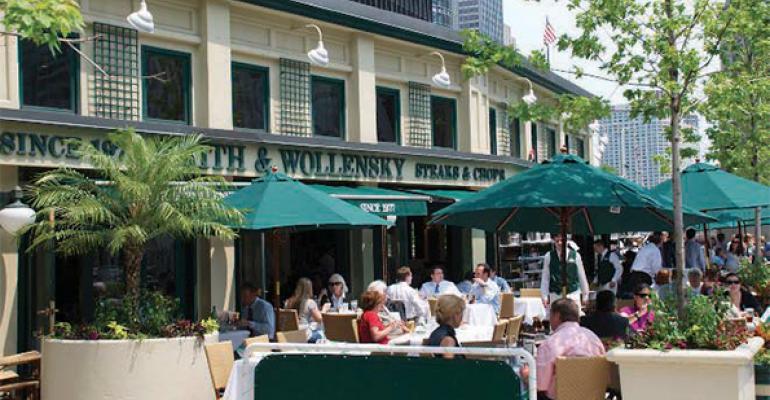 A casual spinoff and the first international location are on the horizon for this revered group. &bull; See more Featured Operators

This fall, Smith & Wollensky Restaurant Group is rolling out Wollensky’s Grill, a casual cousin to the fine-dining steakhouse brand. The offshoot will open in the lower-level space of the company’s location on the Chicago River.

At the same time, the group will unveil its first overseas location with a new steakhouse in London, a two-level, 15,000-square foot complex near the busy Strand.

Both moves reflect a measured expansion strategy for the company, which has grown from its original NYC location to nine steakhouses across the country (the NYC site remains under separate ownership).

Wollensky’s Grill is intended as a gateway for diners who are drawn to the concept, renowned for its dry-aged steaks and thick wine lists, but who lack the deep pockets to spend an evening there. Items on the menu developed by corporate executive chef Matt King include a signature smoked rib eye, foie gras, lobster corn dogs, beef bacon and a charcuterie plate.

Michael Feighery, c.e.o. and president of the Boston-based company, recently outlined the thinking behind some of these developments.

RH: The new Wollensky’s Grill is said to be “reopening.” What was there before?

Feighery: It started as a Wollensky’s Grill about 10 years ago, but it wasn’t really a distinct dining experience. It ended up being smaller portions of the same menu items, and it didn’t really have its own character. When the economy got challenging around 2008, we just combined the two concepts.

The idea is to provide two distinct Smith & Wollensky dining experience at the same location. Smith & Wollensky is not a cheap place to dine, and we serve larger portions, including 22- to 28-ounce steaks. We see our regulars three or four times a year. It’s been well-received in Chicago, but the market there is increasingly competitive, and a lot of younger adults struggled to (be able to) dine there. The Grill will be an approachable gateway to an entirely original culinary and hospitality experience that’s familiar to our traditional steakhouse guests. Checks at our Chicago steakhouse average $90-$95; this will be closer to the $55 mark, depending on how many cocktails you have.

RH: Smith & Wollensky has long been known for its focus on wine. Will that continue at Wollensky’s Grill?

Feighery: Our guests will still have access to a 400-bottle wine list, but we will also have craft beers, creative cocktails, wines by the glass and a pretty comprehensive half-bottle list—about 40 varieties.

Standing out in a crowded segment

RH: And smaller plates are part of the new concept as well.

Feighery: We will have three categories on the menu: shareable plates—somewhere between $12 and $18, bigger than appetizers and more interactive; three or four Smith and Wollensky classic big steaks, sliced so everyone at the table can enjoy them without committing to one cut, and 10 to 12 main course grill items.

RH: Presumably you have plans to roll these out elsewhere?

Feighery: We plan to get this open and running for six months, see how it goes and what adjustments are needed, then look at eight other locations. I think the Grill will be an attractive concept for standalone sites, too.

RH: You are opening your first international location in London. Are there short-term plans for more?

Feighery: I receive a call about every week from international landlords who want us to be part of their projects. We will have some challenges working 3,000 miles away, but have some good partners and we’ve brought in a former regional manager to oversee the project. I think the dining segment is so diverse in London that we will be a good fit. We will run this for a year, see what the challenges are and be selective about where we go. If we don’t execute correctly and spread ourselves too thin, we will be doing our guests and investors a disservice.

RH: The steak category is very crowded. How do you stand out?

Feighery: We have a long history of a very engaged, well-tenured staff who are hospitality professionals. They are skilled at reading the guest when they arrive and deciding if they should interact with the table and be part of the dining experience or just be there to serve. That does separate us from the chains. I’m a prime example: I started at the company in 1986 as a butcher’s and steward’s assistant.

RH: Smith & Wollensky has been described as a boutique collection. How does that play out at the different sites?

Feighery: You won’t see the same thing, but all the restaurants have touches of Americana and antiques, hardwood floors and banquettes. Each one pays slightly different homage to the location—in Chicago you will see bears, for instance; in Philadelphia there are bells. Each one has different touches reflecting the setting. London will have that, too.