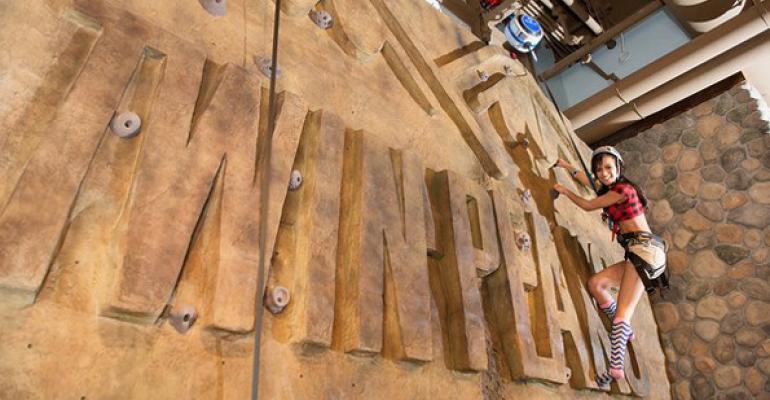 Installing a 39-foot-high recreational climbing wall inside a casual restaurant seems like a crazy, perhaps even dangerous idea. Especially for a restaurant like Twin Peaks, where the mostly male clientele has plenty to do in the first place: be served food and drink by well-endowed, skimpily clad waitresses and soak in the restaurant’s mountain-themed sports bar ambiance. But that’s what the chain did at its just-opened store on the Las Vegas Strip—and it’s one sign of what it takes to attract attention in the fast-growing babes-and-brew corner of the casual dining segment today.

Twin Peaks definitely went big at its new unit, the 25th in the chain. The restaurant seats 400 guests but there’s still plenty of room to move around in the 14,000-sq.-ft. dining room.

“There are two side-by-side mountain peaks that go all the way up, 39 feet high,” Dewitt explained. “We’ll operate what we’re calling the ‘Twin Peaks Challenge.’ Friends can get competitive, so we’re hoping people will challenge each other to race. We’re putting buzzers at the tops of the peaks. The first climber to reach the top hits the buzzer and it will light up and declare the winner. There will be some grand prize that probably will include a T-shirt and a pitcher of beer.”

It sounds like a fun feature. Website www.indoorclimbing.com says there are more than 3,000 indoor climbing gyms worldwide, so some restaurant guests may be experienced climbers. As for the rest, even given the wall’s built-in safety harnesses, we’re betting the liability insurance tab for this restaurant would make most operators cringe.

But is it fun to watch? You bet. The climbing wall certainly gives Twin Peaks something its direct competitors—Hooters, Tilted Kilt, Show-Me’s—don’t have.

All three concepts may need a point of distinction after new competitor Bombshells Restaurant and Bar gets going.

Bombshells is a new venture from publicly owned Rick’s Cabaret International. The first unit opened in Dallas earlier this year. While other restaurants in this category represent a naughty take on traditional casual dining and sports bars, Bombshells comes at it from a different direction.

The concept’s parent company primarily operates in what is politely called the “adult nightclub” business. It’s all clean fun: “Sexual contact is not permitted at any locations,” a press release notes. Bombshells is positioned as a standalone restaurant, not a strip club. The waitresses at World War II-themed Bombshells wear skin-tight, low-cut tank tops similar to those worn by female servers elsewhere in this segment.

"Bombshells is just the right mix of great restaurant and fun sports bar that Dallas has been waiting for," said Ed Anakar, president of RCI Management Services, a unit of Rick’s Cabaret International. "Our guests say they love our food, concept and large patio, which is dramatically situated so that you feel as if you're right on top of the Stemmons Corridor, but with live music, an amazing wait staff and a unique atmosphere. It's a great place to enjoy a fabulous meal, watch your favorite sporting event on one of the 50 large HD TVs or enjoy live music performance by some of the top bands."

Rick’s Cabaret International is a public company with an $81 million market capitalization that’s testing this concept as it searches for new vehicles to drive growth. It already has experience operating multiple units on a national scale.  If the company decides it wants to build out Bombshells to compete with Hooters, Tilted Kilt, Twin Peaks and Show-Me’s, it’s set up to do so in a hurry.