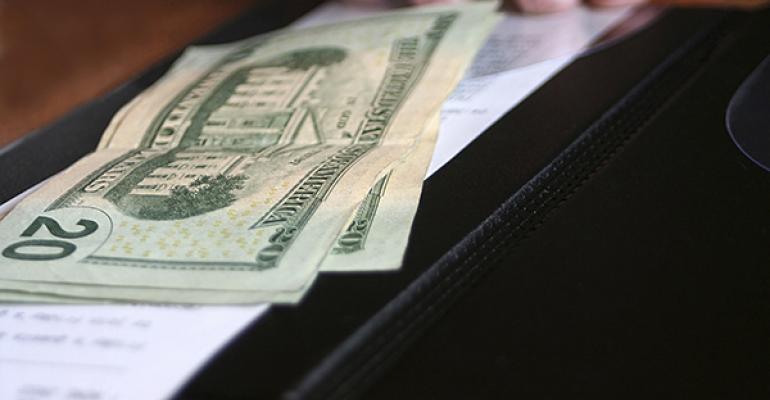 Let’s hope L.A. restaurant Alimento’s decision to add a “kitchen gratuity” line to guest checks works as chef/owner Zach Pollack hopes. His move could give other full-service operators a way to placate customers who think restaurant tipping schemes are unfair yet keep a traditional tipping format in place. The root of the problem: Servers are overcompensated, while back-of-the-house workers don’t make nearly enough.

Tipping has become a philosophical question for a growing number of patrons. But it’s a pragmatic issue for restaurant operators, who have to attract and keep skilled employees. Whatever the reason, the no-tip movement, which aims to scrap voluntary gratuities and replace them with mandatory service fees, is gathering steam. As trendmeisters Baum & Whiteman forecast earlier this fall, “While most people pooh-poohed no-tipping restaurants as un-American, the movement now possesses big momentum...irreversible, perhaps.”

A handful of no-tip proponents are chef/owners. Three-Michelin-star holder Thomas Keller has had a service-included policy at both his French Laundry in Napa Valley and Per Se in New York City for years, although customers can and do tip on top of that 20 percent fee. More recently another Michelin-starred chef, Daniel Patterson, chose to go no-tip at his new, popularly priced  Aster in San Francisco Patterson. Other chefs have begun to follow their lead.

Worse, they claim, tips end up subsidizing restaurant owners. This infographic argues that tips are in reality a tool that enables employers to pay servers less than the minimum wage.

“The first $5.12 that you tip is not a supplement to the server’s minimum wage,” it tells consumers. “It’s a subsidy for employers not to pay minimum wage. You’re paying 71 percent of the restaurant’s server payroll.”

The media has jumped on the no-tip bandwagon, too. The latest salvo: New York magazine’s 10-page package “Tipping: The Scourge of the Service Industry."

Pollack’s approach at Alimento, which went into effect just last week, tackles the issue from a common-sense perspective. He says the idea is to enable Alimento, which recently saw two ace line cooks take better paying jobs, to keep talented kitchen staffers around.  “They couldn’t make it work on their end, and I couldn’t make it work on mine—this is a small restaurant,” Pollack told Los Angeles magazine. “But at the same time, the servers are walking away with a lot of money. That’s great, but it put an issue in the spotlight that I’ve been aware of for a while.”

Customers who dine at Alimento now receive a card containing the following statement when presented with their bill:

“At Alimento, we believe a great meal comes together not from the effort of any single person, but from the successful cooperation of a team of people, from servers and hosts, to cooks and bussers. Nevertheless, traditional tipping has created a very sizable gap between the earnings of cooks and servers, and current state law prohibits restaurants from sharing servers’ tips with kitchen staff.

“Rather than imposing a mandatory ‘service fee’ or ‘kitchen surcharge’ as many are doing, we’d like to leave the choice in your, the diner’s, hands. If you’re perfectly happy with tipping as usual, there’s no need for you to do anything differently. But, if you’d like to send a little love to the lads and ladies hustling in the back, we’d be honored to provide you the means to do so. All such tips will go to line cooks and other kitchen staff; no one in management will participate.”

Pollack thinks this move could turn out to be a overall plus for independent restaurants.

“I have this fantasy that more restaurants adopt this strategy,” he says. “If they do, then the logical conclusion would be that the restaurants serving the best food would garner the best tips for cooks, which means the best restaurants would be able to sustain better cooks, rather than losing them to hotels, country clubs, or lounge restaurants that are able to subsidize kitchen labor with extra income.”

So what’s a restaurant manager or owner to do? Finding a tipping strategy that works for everyone, customers and staffers alike, could become a lot trickier soon. Be sure to listen closely to your staff, not just the activists, before making a change to yours.