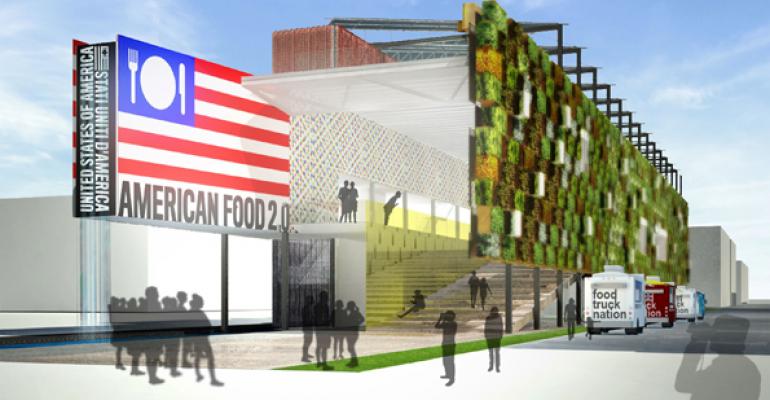 Food trucks busting out all over

Here’s something food truck operators should keep in mind the next time they’re hassled by local government officials. The U.S government plans to make food trucks a key feature of the U.S. pavilion at Expo Milano 2015, a food-themed international exposition set to take place in Italy, next summer. “If you want to see how cool American food can be,” the implied message will be, “check out our food trucks.”

To date, 98 countries have signed up to participate in Expo Milano 2015, whose theme is “Feeding the planet, energy for life.” The sponsors describe it as “an extraordinary universal event displaying tradition, creativity and innovation in the business of food.” President Barack Obama announced U.S. participation during his recent trip to Rome, Secretary of State John Kerry then hammered out the details with Expo Milano officials.

“The United States is moving forward with ‘Friends of the U.S. Pavilion Milano 2015,’ our partner in the effort to build the USA Pavilion at the Milan Expo. This group must now raise the necessary private funds to sponsor the USA Pavilion. In partnership with The James Beard Foundation and the International Culinary Center, and in association with the American Chamber of Commerce in Italy, the Friends group will work for a vibrant U.S. presence at the Milan Expo. Its goal is to use state-of-the-art digital media and other novel approaches to showcase American leadership and innovation in global food security, agriculture, and cuisine.” â€¨

One of those novel approaches: food trucks.

The U.S. Pavilion, dubbed American Food 2.0, will showcase U.S. food products and cuisine for the rest of the world. One of its key facets has been labeled “Food Truck Nation.”
â€¨
“Our program will showcase the uniquely American food truck experience taking hold across the United States as a representation of American diversity, innovation and entrepreneurship,” say the Friends.

“Food truck experiences in the U.S. will lead up to Expo Milano, where ‘trucks’ will operate at the USA Pavilion and in the streets of Milan.”
â€¨
The food trucks will be on equal footing with the U.S. pavilion’s other dining facility, the James Beard American Restaurant. This operation will be a “100-seat restaurant that will showcase top American culinary talent, beverages and other products, as well as a burger bar and beverage program to give Expo Milano visitor and VIPs a true taste of American Food 2.0.”

The U.S. government isn’t the only entity looking to add some food truck street cred to its program. This fall Royal Caribbean Cruise ship Quantum of the Seas will offer an onboard food truck experience. Here’s how the cruise line pitches it to potential guests:â€¨ “Welcome to SeaPlex Dog House, where the first-ever food truck at sea serves up gourmet hot dogs for all to enjoy in the SeaPlex, the largest indoor active space at sea. With a wide menu of delicious sausages and hot dogs that span the globe in origin and flavor—plus a variety of tasty condiments, sides and salads—this is one dog house where you’d much rather be in than out!”â€¨

Business should be brisk; as with most onboard dining options, passengers can eat as much as they want at SeaPlex Dog House, as often as they want, for no charge.
â€¨
Royal Cruise Line says one reason it’s offering this non-mobile food truck food experience is that existing trucks are primarily limited to big-market cities. Once you get past Chicago, L.A., New York City, Miami, Austin, Portland and San Francisco, they argue, there aren’t many trucks choose from. They see an vast, underserved market.â€¨

So do the people who run Walt Disney World near Orlando. They’ve added four food trucks to the dining options available at Downtown Disney. The trucks, one each for the four theme parks that make up the Disney World complex, move around within the massive property. They’re operated by Disney and serve food that’s less edgy than typical food truck fare.â€¨

When giant corporations and even the U.S. government get into the food truck business, it tells you just how big the collective food truck customer base has become. If you’re thinking about giving the food truck game a try or operating one as an extension of your restaurant, your time has come.