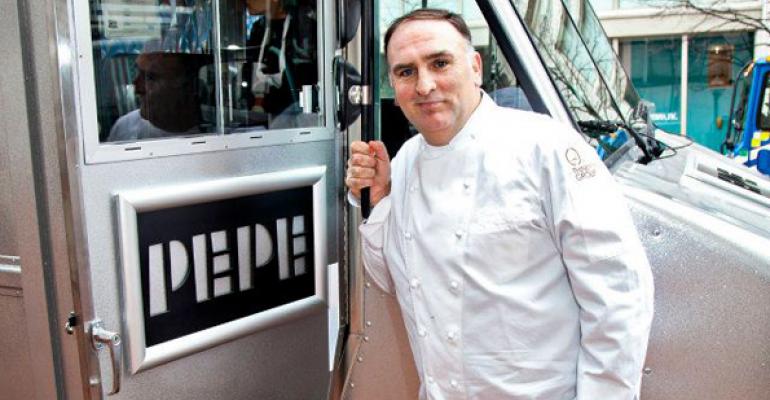 Why José Andrés started up a food truck

José Andrés, the creative genius behind a restaurant empire, recently launched his own food truck with the belief that every restaurant operator should have one. Well, do you?

At the moment, Andrés may be the hottest chef in America. Last year the James Beard Foundation named him America’s Outstanding Chef. That award was a tribute, in part, to the empire of restaurants he’s built under the umbrella of his company, Think Food Group. His restaurants stretch across the land and include Jaleo, China Poblano, Café Atlantico, America Eats, Minibar by José Andrés, Oyamel, Zaytinya and The Bazaar by José Andrés. Add to that a catering company and so much more and you have to wonder why he launched Pepe, his first food truck, in Washington, DC.

Here’s what he said at a press preview: “I think every chef should have a food truck. It’s a good way to test the markets, to invest in meeting future restaurant goers. So, you know, this is a good thing for more businesses.”

Andrés explained that he serves great sandwiches at his renowned Spanish tapas restaurant, Jaleo, but because it is a tapas concept, the sandwiches often get overlooked. At Pepe, his terrific sandwich menu is getting the attention it deserves. He’s also suggested that newer menu items that will be sold at Pepe could show up as menu items in some of his restaurants.

Andrés says he’s also using his truck in DC as a laboratory for future food trucks. His next will be in Miami where he’s opening a second version of The Bazaar by José Andrés at an SLS Hotel there. His newest Pepe will be poolside at the hotel.

At either Pepe, you’ll find primarily Spanish sandwiches, many of them inspired by the sandwiches he ate growing up in Spain. Here are some menu items in rotation at Pepe:

The prices at Pepe are higher than those at most food trucks, and the $20 Pepito de Iberico is likely the highest priced food truck item in the land. But here’s how Andrés explained the prices to the Huffington Post: “I want good cheese, not crappy cheese, good ham, not crappy something and that’s it.” Well, based on customer lines that often stretch half a block, many people also want good-quality ingredients on their sandwiches and are willing to pay for them. Customers may also consciously or subconsciously yearn for the authenticity that Andrés always delivers with his food.

“I grew up with these sandwiches,” says Andrés. “The good and the bad is that this truck is me. If people don’t like the foods I loved when I was growing up, we’re in trouble.” Since Pepe’s debut in March, it’s very clear that Andrés and his group are on the opposite end of trouble.

Like many other food trucks, Andrés will be renting out his food truck for all types of parties and special occasions. And, according to established practice, consumers will be able to track down Pepe on Twitter: @pepefoodtruck.

Could The Bazaar by José Andrés be America's best restaurant?
Mar 30, 2012