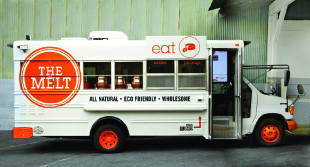 The food truck world has to date been the province of culinary renegades and business world outsiders. Trucks gave these mobile entrepreneurs a way to break into the business at the ownership level—instead of becoming someone else’s employee—while typically lacking the capital need to open a brick-and-mortar restaurant. Get one truck rolling and they’re in the game. A mini fleet of two or more trucks and you’re a giant in the food truck world.

Now it looks like the food truck model is being co-opted by corporations in search of rapid growth. Fast casual grilled-cheese sandwich chain The Melt plans to roll out 100 trucks over the next few years, with the first 25 deployed by the end of 2012. Most will operate in the San Francisco-based company’s home base or in nearby West Coast markets.

The trucks are part of the company’s aggressive business plan. The Melt currently operates five brick-and-mortar stores in Northern California and plans to open 21 more over the next few months. That alone is a breakneck expansion pace; factor in how rapidly the mobile units will come on line and we’re looking at a build-out of historic proportions.

But if you’re opening traditional restaurants at a rapid clip, why mess with food trucks?

“This isn’t just a marketing deal,” The Melt’s founder and c.e.o. Jonathan Kaplan tells USA Today. “It’s a component of a strategy that Melt has discussed.” That strategy involves getting The Melt to 500 locations by 2015, then either taking the company public or selling it to private equity investors.

It’s a business model that comes straight from the high-tech sector, where Kaplan, founder of the venture that came up with the Flip Digital camera, first steered a company from its start-up phase to buyout. In Flip’s case, the payoff was a $590 million deal with Cisco Systems.

What’s unique about The Melt’s trucks is that they are roughly identical to its traditional stores.

The fleet will consist of retrofitted school buses. Each vehicle offers a 200-sq.-ft. work area and has the same equipment as the company’s permanent stores. “While most food trucks are offering less than a restaurant would, we are the complete opposite,” The Melt’s Paul Coletta tells Eater. “This is not Melt lite. It’s our version of wheels and walls. We want to be the leader in that space.”

The concept’s menu offers five variations on a grilled cheese at $4.95 apiece and five soups that cost $3.95 a bowl. Add-ons include Greek yogurt, fresh whole fruit and three dessert options. Beverages are in the $1.75-$2.25 range, and there’s a separate, much-smaller menu for breakfast. Michelin-starred chef Michael Mina sits on The Melt’s board of directors, so you know food quality is a strong focus.

Another point of differentiation for The Melt mobile concept is that the company intends to park vehicles at the same spot every day. An operation of this scope might be a little too big for the catch-as-catch-can location-hopping most trucks rely on, driven by Facebook and Twitter posts. “We want to create a non-traditional pattern,” says Coletta, “which is to secure fixed bus stops that have specific, reliable times. For example, we want folks to know that The Melt bus #1 is always at X stop from 10 a.m. to 3 p.m. We are reinventing mobile eating.”

We don’t know if The Melt’s 100-truck gambit will propel it to the buyout phase as quickly as its initial investors hope. But if it does, or even comes close, expect other entrepreneurs to employ mass rollouts of food trucks to help other new concepts gain a local, regional or even national footprint in a hurry.

If you have a good concept and want to attain critical mass in the marketplace before competitors jump in, a combination of traditional restaurant stores and mobile units could soon be the way to get it—fast.