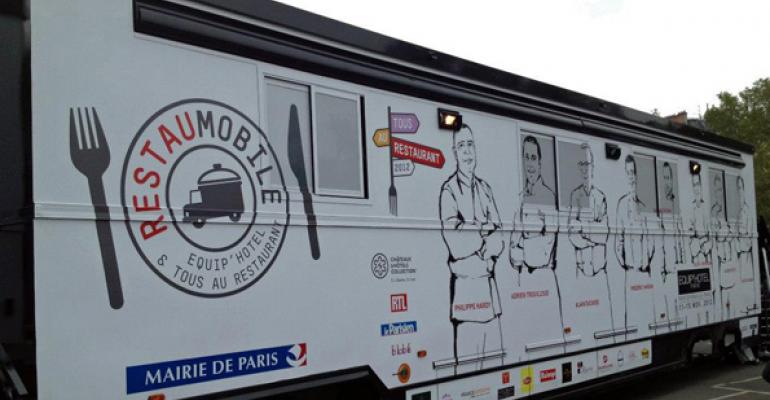 Food trucks: The next generation

Even though food trucks have found their way into the dining mainstream, clever new ways of using them continue to emerge.  This week the upper echelon of France’s culinary elite are mobile-cooking their way round Paris, while the Denver-based Cavemen Cafeteria truck keeps churning out its take on the popular Paleo diet. Both concepts are idea-starters for other food truck operators, current and prospective.

Restaumobile, a 40-seat mobile dining venue that’s more bus than truck, is the centerpiece of Tous au Restaurant, France’s nationwide version of Restaurant Week. Most establishments participating in Tous au Restaurant (loosely translated as “everyone to the restaurant”) offer two-for-one deals with special menus for the occasion. But Restaumobile is setting a standard by which all future mobile dining will be measured. It’s a full-service restaurant on wheels whose customers pay 45 euros for a two-course lunch and 70 euros for a three-course dinner. There are two seatings for each service. All meals are prepared on board, and reservations are a must.

This mobile venue is an attraction in and of itself. But in France the primary focus is on the caliber of chefs doing the cooking on board. Each day, two standout chefs who otherwise run some of the country’s most revered restaurants prepare the meals.  One chef handles lunch, the other dinner, and the chefs change each day. The roster of participating chefs includes Michelin-star holders like Sebastien Chambru of the legendary Moulin de Mougins, Laurent Petit from Le Clos des Sens in Annecy-le-Vieux and others of similar stature.

The purpose of Restaumobile is to promote French gastronomy and get people excited about going to restaurants, and it seems certain to do the trick. The American equivalent would be if, say, a sit-down food truck pulled into your city with The French Laundry’s Thomas Keller cooking lunch for $58 while Daniel Boulud prepared dinner for $92, with Daniel Humm and Eric Ripert manning the kitchen the next day. As a promotional tool to lend visibility to and excitement about the full-service dining experience, the Restaumobile concept seems like a winner. Let’s hope someone in the U.S. gets their hands on a vehicle like this one and puts it to imaginative use. 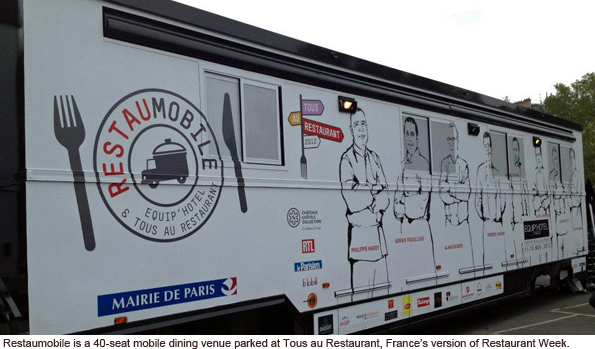 But all you need is regular-size food truck to offer a menu geared to the needs of those who follow special diets, be they of the weight loss or optimum health variety.

That’s what proprietor Will White is doing out of his Caveman Cafeteria truck in Denver. White specializes in dishes geared to fans of the Paleo (i.e., caveman) diet. The truck serves items that built around vegetables and lean, grass-fed beef, healthy fats and nuts and seeds—which is to say, ingredients that formed the human diet in the Paleolithic era, when hunting and gathering prevailed. In its modern iteration, the Paleo diet eschews grains, dairy, processed foods and sugars.

White has found strong acceptance for his Paleo diet truck idea, even spinning off a catering business from it. But there plenty of other popular diets around food truck proprietors could plug into. Some are health-based (DASH, TLC, the Ornish diet). But weight-loss diet followers might offer the best chance for food trucks to capture a significant clientele. Trust us, those who adhere to Weight Watchers, the Biggest Loser Diet, the South Beach Diet and dozens more like them are looking for good-tasting options they don’t have to prepare themselves. Trucks that prepare tasty meals that fit into the guidelines of one or more of these weight-loss diets could discover a valuable niche in the market that’s currently going unfilled.

As we imagine it, you wouldn’t even have to serve weight loss diet food full-time. A food truck could offer tasty weight-loss items in an office park location at lunch but still serve gourmet burgers or giant burritos or other late-night fare when the bars close that night. That’s the beauty of the highly adaptable food truck business.

Creativity has always been high in the food truck sector. Restaumobile and Caveman Cafeteria show a couple of ways it could go even higher.