Stir: Thinking outside the box 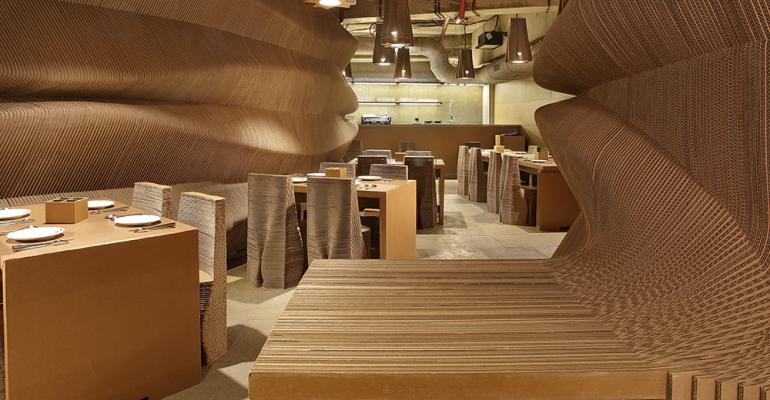 There are restaurateurs who promote sustainability and then there are architects who construct restaurants entirely out of recyclable and biodegradable cardboard. The Mumbai-based restaurant Cardboard Bombay — which opened in February — was built by Indian architecture studio Nudes and, true to its name, the interior of the restaurant including tables, chairs, walls, and light fixtures are made entirely out of 40,000-square feet of corrugated cardboard.

The effect is a cavernous 1,422-square-foot space that looks like it was intricately built using pencil shavings or carved out of sand dunes instead of “just cardboard.” But even though it may seem like a restaurant like this would not be structurally sound or run the risk of melting from condensation from glasses on the table, operator Bad Hospitality Group, along with designer Nuru Karim, have it covered:

“The chairs are comprised of 60 layers of 15-millimeter-thick cardboard reinforced by paper tubes,” a representative for Cardboard Bombay said. “Four tubes support the base and two support the back. The table itself is self-standing and made from the same layers of corrugated cardboard. The table top is also coated to prevent any food or beverage absorption.”

The unusual material was not only selected to be environmentally-friendly, but the cardboard also is sound-absorbent, which makes the restaurant unusually hushed.

Crayons, highchairs, reusable cups: Kids dining products for restaurants that are sure to satisfy
Jan 09, 2020

The most festive restaurants to get you in the Christmas spirit in New York, Los Angeles, Chicago and Georgia
Dec 20, 2019

From a new destination at JFK airport to a Mexico interior made of animal bones, here are 14 notable restaurant designs from 2019
Dec 18, 2019