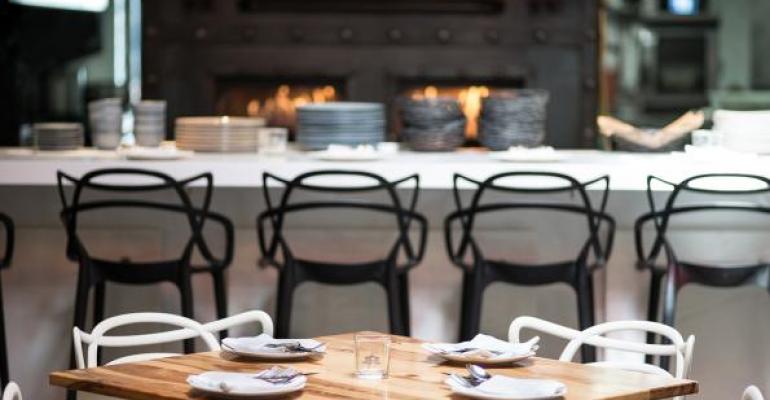 Guests loved it. Critics loved it. There was just one problem: The handsome 120-seat restaurant wasn’t making a profit.

“One of my investors said Sambar was like my art film. The critics liked it and the customers liked it. But it just could never make money,” says Richmond, who is also known in Los Angeles’ Culver City neighborhood for her nine-year-old restaurant Akasha.

One profit killer: Nearly every aspect of Sambar’s menu was made in house — every chutney, masala, naan and even the yogurt. Compromises were needed to improve margins. But Richmond wasn’t was willing to do that.

So the chef and restaurateur made a decision: Close Sambar and relaunch it as AR Cucina, an Italian concept with a menu inspired by Richmond’s many trips to Sardinia.

The switch would have to happen within 30 days. That deadline was in part to stay within health department restrictions on closures, but Richmond also kept paying rent and payroll with the hope that most on her staff would stay for the restaurant’s rebirth.

“Would I have preferred to close for six months and go to Italy with my chef de cuisine? Yes, absolutely. But we couldn’t do that,” she says.

Richmond already had tons of recipes. Her chef de cuisine Kirk Plummer also had a passion for Italian menus.

Fortunately, the restaurant’s designer was also a partner, and was able to transform the décor quickly.

The restaurant’s chairs, which coincidentally were made in Italy, could stay, as did a colorful centerpiece light fixture. One wall that had featured contemporary Indian artwork was repainted as a pastoral scene from the Italian countryside rimmed by rich green wainscoting. Along another wall, photos of Richmond’s trips to Italy set the scene.

The logo was redesigned and new plates were ordered, all more quickly than Richmond would have done typically, but there was a thrill to the accelerated pace, she says.

Much of the staff did stay, but had to be retrained. Where Indian food was served with dishes to be shared, for example, the Italian menu included more specific courses and wine service. Instead of goat curry, tandoori lamb chops and a pork vindaloo in the style of porchetta, the kitchen is now churning out grilled octopus with crispy chickpeas and escarole; lasagna verde made with spinach pasta and a short rib, prosciutto and mushroom ragu; and actual porchetta made with Niman Ranch pork, herb salt and fresh herbs, and pear mostarda with dandelion salad.

Some guests visiting the relaunched restaurant expressed disappointment that Sambar was gone. “I had a couple of people almost mad at me,” Richmond laughs. “I was like, come on! I can’t stay open and lose money every month!”

Others cheered the rebranding. Richmond wonders if Indian food is perceived as too spicy for some, too ethnic or just too susceptible to the veto vote.

Though still early, Richmond says AR Cucina has been hitting its numbers. She estimates the conversion cost roughly $200,000.

Her only regret is not having more time to work out kinks before the opening, such as the nuances of preparing fresh pasta, which Richmond describes as “almost a living thing,” vulnerable to weather changes.

But the restaurant has found its rhythm and Richmond sees a bright future. “It’s already going really well,” she says.