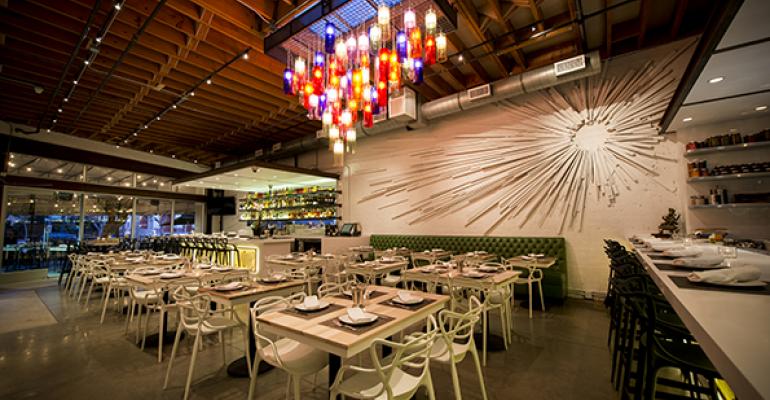 <p>In the space that once housed Ford&rsquo;s Filling Station, Sambar is a few doors down from Richmond&rsquo;s seven-year-old restaurant Akasha.</p>
Trends>New Restaurant Concepts

Seven years after Akasha Richmond opened her first restaurant, the eponymous Akasha, the chef/owner has given birth to a second concept located two doors down the street.

Sambar, a 120-seat Indian-inspired restaurant, opened in May in the restaurant-thick Culver City neighborhood of L.A. An idea that Richmond had been cultivating for years with travel throughout India and study of the cuisine around the world, Sambar was in part the result of a perfect space opening up close enough to the restaurant Akasha to allow Richmond to walk from one kitchen to the other.

Akasha, which Richmond describes as a “monster” of a restaurant serving three dayparts alongside a vigorous catering operation, has long offered some Indian dishes. But at Sambar, Richmond dives deep with a seasonal and pan-regional menu that offers both authentic dishes and those with more of a California spin.

“I started studying Indian cooking a long time ago, when I first started studying yoga,” says Richmond, who was once personal chef to Michael Jackson before she opened Akasha in 2008. “I love the masalas and the spices and the flavors. I also felt there was a huge void in Los Angeles for Indian food.”

From Northern India, there are heartier dishes like goat curry on the menu. From the Goan region, Chicken Xacuti and Tandoori-style Pistachio Lamb Chops. But, in a more fusion twist, a pork shoulder is roasted with a vindaloo masala in the style of porchetta.

The restaurant serves no beef. “I felt like lamb, pork, chicken and fish was enough meat,” she says.

Unlike a lot of mom-and-pop Indian restaurants in Los Angeles, Sambar also pays close attention to the bar side, with a line of cocktails enhanced with classic Indian ingredients, like tamarind syrup and rose petals.

Clare Ward, a mixologist who came over from Akasha, is making house-made bitters with turmeric and spiking Pimms cocktails with fresh curry leaves. The beverage program includes house-made chai and organic Indian teas.

The average check is roughly $35-$40 per person, with drinks, and no entrees on the menu are more than $24.

Although she did not design the restaurant as an expansion vehicle, Sambar has gotten a warm response from guests and some within the company are already talking about doing more.

“It actually would be easier to multiply this than Akasha,” Richmond says. “But right now, I just want to make this right. It’s not even on my radar.”