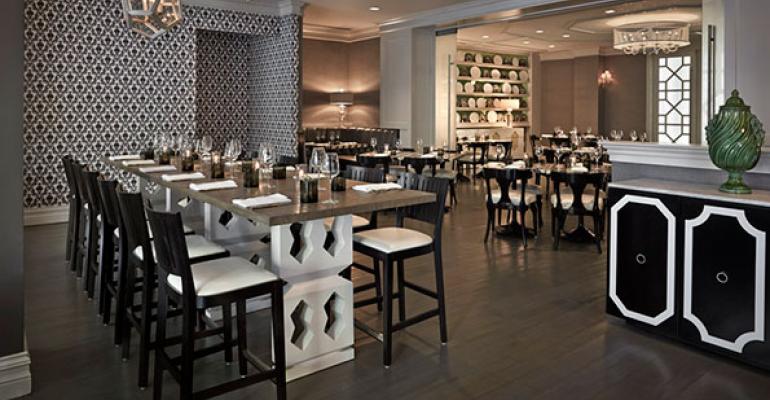 <p>Community tables, like this one at Cast in Santa Monica, CA, are one way restaurants can accommodate solo diners.</p>
Archive

More&nbsp;consumer trends, including research and data on the restaurant industry.

Have you noticed more solo diners coming into your restaurant? If so, unlike your diners, you’re not alone.

Recent research from the NPD Group shows consumers are by themselves at more than 50 percent of eating and beverage occasions. Coupled with the fact that there are more single-person households in the U.S. today than ever before, solo diners have wide-ranging implications for the restaurant industry.

So how can restaurants capitalize on this growing trend and ensure they’re getting their fair share of the pie? Understand the makeup of the current and prospective customer base, specifically customers who eat alone, and make solo diners feel welcome.

To start, make sure there is a comfortable environment for them, suggests Dennis Lombardi, a restaurant consultant at WD Partners. “Being alone and sitting at a table for four kind of highlights the fact that they’re by themselves,” he says.

Welcoming solo diners starts the moment the diner walks in the door. Some guests are very content being on their own and do not want to be disturbed; others crave more interaction. Russell Warner, director of f&b at Cast in Santa Monica, CA, says there are easy clues to determine which type of guest you’re hosting: books, papers and iPads.

"For those that want more interaction, it is pretty clear as they are looking up and making eye contact with you more,” he says. “These are the guests that you need to be able to spend some more time with to meet their needs and help the time move on for them.”

Location
The first topic to consider when welcoming a solo diner is where to seat them. Darren Seifer, f&b industry analyst at the NPD Group, says there was a time when restaurants would put a customer dining alone by the kitchen or at a counter. But times have changed.

“If you’re seeing people come in wanting to work, how amazingly cool would it be to say, ‘We have a booth that’s quiet and, by the way, there’s an outlet nearby for your laptop,’” Lombardi adds. “As a single diner, you just won me over.”

The trick to seating solo diners at the right location is getting your host staff to care enough to look for these clues.

“If I say, ‘I just want to have a quick meal’, what is the cue there?” Lombardi asks. “First, you don’t need to have them by an outlet, and (the haste) should also be communicated to the server so he or she can suggest menu items that are prepared more quickly.”

Entertainment
Providing the proper entertainment for a solo diner is also critical.

Keith Treyball, co-owner of BLT Steak in New York City, says TV screens allow solo diners to feel at ease because they aren’t forced to socialize. Optimal views are at the bar or a high-top table.

Lombardi says that, in addition to TVs, many restaurants today are seating solo diners where they can watch the kitchen cook their meal and even interact with the kitchen staff.

“Picture being able to sit around a high-top counter watching the cooks make pizzas,” he describes. “How cool would it be for the cook to put a piece of pepperoni on a little dish and say something like, ‘Try this pepperoni, there’s nothing like it.’”

One key to helping the guest who is dining solo is complimentary Internet access, says Warner. “Unfortunately, as we get more dependent on our devices, this is a way people spend their alone time and if you have this offering, guests love it," he says.

Menu
Solo diners must be part of the consideration set when developing menus as well.

Lombardi suggests small plates, limiting items that are meant to be shared and featuring desserts that can be boxed quickly so hurried diners can take them on the run.

Connection point
According to Lombardi, what the single diner doesn’t have is a “connection point,” or something to connect his or experience with the restaurant. For a bartender, a connection point is the difference between no tip and a big tip, he says.

“Being able to say something about the local neighborhood is important,” he says.