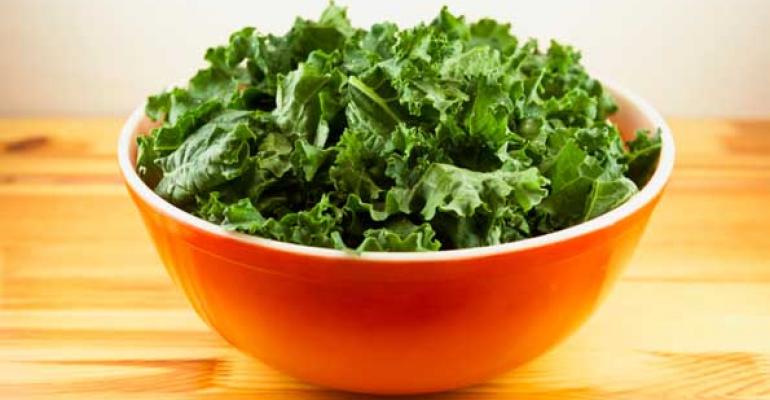 Creative techniques and rising protein costs have pushed vegetables to the center of many menus, according to research firm Technomic.

The incidence of vegetables has risen more than 11 percent in the past three years, led by such standouts such as kale (up nearly 400 percent in menu mentions), cauliflower and zucchini.

Technomic executive v.p. Darren Tristano says high protein prices have spurred chefs to see vegetables in a new light. “Different preparation methods, like roasting Brussels sprouts or caramelizing root vegetables, have had a big influence on the way vegetables are menued,” he adds.

Senior manager Kimberly Perman points out that produce is the new star of many plates. “Vegetables are featured more often in center-of-plate arrangements and, when done right as sides, are stealing the spotlight from protein-based entrees.”

A perfect example of this move toward produce has been cauliflower “steak,” nudged into the limelight by Blue Hill’s Dan Barber at $34 a pop and quickly imitated by chefs everywhere.

The category is likely getting a boost from health-conscious consumers as well. About two-thirds (64 percent) of consumers agree that nutrition and healthy eating habits are important, up from 57 percent three years ago.

Menu expert Nancy Kruse observed recently that vegetables are popping up in unexpected places on menus—from pizza (California Pizza Kitchen's Brussels + Bacon Pizza) to breakfast (a broccoli and turkey frittata at First Watch). She calls it part of a “foods with benefits” trend in which restaurants are appealing to guests by including health-halo items on menus.

By the way, the USDA’s Food Pyramid recommends eating 2.5 cups of vegetables daily.