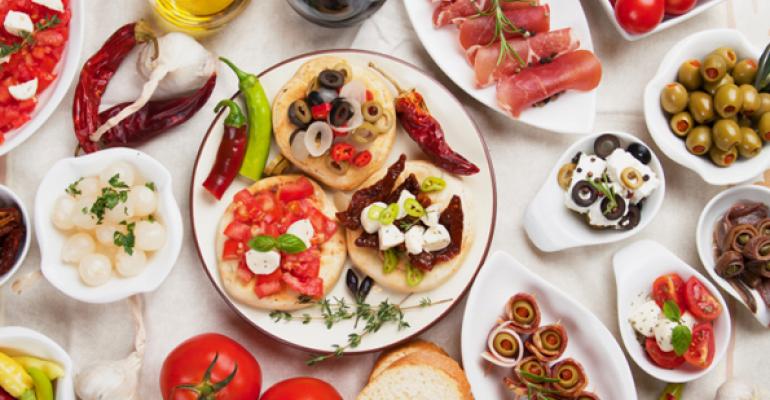 A new study from Technomic further confirms what we already know: Consumers love small plates. The good news is appetizers are being purchased at near pre-recession levels, but sometimes those small plates are being bought instead of a main meal. As the lines between dining dayparts and occasion become more blurred, the challenge for restaurants is to provide fun and flexible options that increase revenue as add-ons, not as replacements.

Thirty-eight percent of consumers say they order appetizers on most or all of their visits, well ahead of the 27 percent who said the same in 2009. Fifty-nine percent say those appetizers are eaten as true starters before their entrée, but the numbers are a little different for items marketed as “small plates.” These downsized portions are eaten in a variety of ways—as starters (39 percent), snacks (14 percent) and as sides (19 percent)—proving their flexibility, but a third of the time they are eaten instead of more expensive main entrees.

“Appetizers, small plates and accompaniments are becoming more of a draw,” said Darren Tristano, e.v.p. of Technomic. “In fact, our data shows that consumer purchases of appetizers are steadily getting closer to pre-recession levels. That’s good news for operators looking to promote add-on sales of starters and other extras. Highlighting the shareable, fun factor of these foods—as well as their versatility—helps them function as menu differentiators.”

Forty-six percent of consumers say they are less likely to order an entrée if it comes with a side they don’t like, while 36 percent admit they choose entrees based on the accompanying sides. By offering and promoting small plates, even as an upselling opportunity instead of a typical side dish, operators can help offset potential lost revenue from those customers skipping the main course. Satisfying customers looking for a post- or pre-meal snack is another revenue opportunity, and a way to capitalize on another trend Technomic recently studied.

Nearly half of consumers (48 percent) say they snack at least twice a day—most commonly midafternoon between lunch and diner—up from just a quarter three years ago. Snackers are satisfying their urges at restaurants 22 percent of the time, up from 17 percent in 2010, providing opportunity for restaurants of the more casual variety.

Customers cite healthfulness and satisfying a craving as the two things they most often look for when snacking. Technomic suggests fast-casual eateries should promote their high-quality, healthful snack offerings as part of the value message to become more competitive with retail and fast-food outlets.

Consumers want customizable options. Small plates can fill a variety of needs throughout the day, but make sure they’re promoted as an add-on and not as a replacement for a bigger-ticket item.