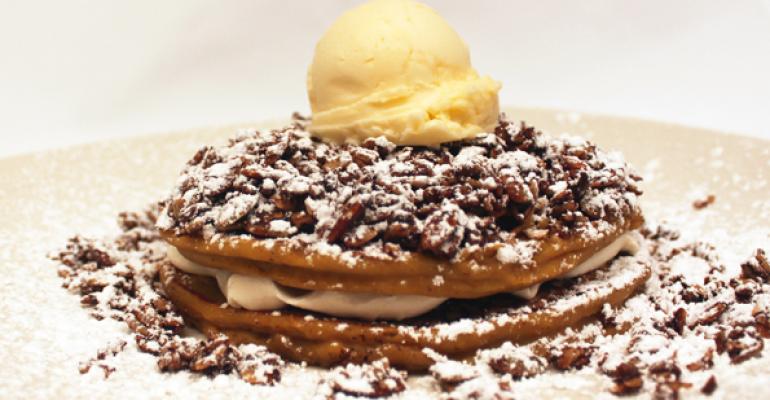 Brunch, 'America's pastime,' can be a real moneymaker

Paul Fehribach, executive chef and owner of Big Jones in Chicago, has simple advice for restaurants considering brunch service: “Go all in.”

If done right, he says, it can be a huge boon to business, which was the conclusion reached by Technomic in the April American Express Market Briefing. Of 500 consumers surveyed, 89 percent said they eat brunch at a restaurant at least occasionally.

Caroline Potter, the chief dining officer for OpenTable, says although Americans didn’t invent brunch, it’s become our national pastime. “Whether it’s folks seeking to kick-start Saturday dining adventures or gather with loved ones over a sumptuous meal on a Sunday afternoon, brunch is a national pastime for foodies, friends and families,” she explains.

Consumers’ hunger for brunch provides an incredible business opportunity for restaurants. By creating that sense of event, operators can charge premiums for items slightly dressed up from regular breakfast or lunch menus, or even offer buffets to take advantage of faster table turnover and reduced labor costs.

Or, they can go all in, like Big Jones, a top-100 brunch restaurant as rated by more than five million OpenTable reviews. Fehribach struck gold when he opened five years ago and chose weekend brunch services, in addition to five weekday lunches and seven dinners, over daily breakfasts. Brunches have become his biggest draw, with more than 200 covers on Saturdays and 300-plus on Sundays, in the 70-seat restaurant serving southern heirloom cooking.

Saturday dinner covers range from 120 to 180, but the check averages are $40, $18 more than during brunch, and equate to more top-line revenue. But Sunday brunches are the top revenue shift of the week and the margins are significantly better, Fehribach says, even with the more expensive local, pastured eggs and dairy Big Jones uses.

He says customers are willing to pay a premium because of the perceived value that comes with local and organic foods, complimentary beignets, a higher level of service (reservations, a full bar with creative cocktails and fresh-squeezed orange juice, a full dessert menu) and unique and interesting foods in addition to the more standard fare.

Big Jones’ brunch is served from 9 a.m. to 3 p.m. and current offerings include crawfish, lamb neck rillettes and the usual array of gluten-free options made from heirloom grains that can be flavored with preserves made in-house from locally grown fruit.

Fehribach is doing exactly what Technomic suggests in the Market Briefing titled, “Pushing the Boundaries of Brunch.” Brunch isn’t just a Sunday phenomenon, with Saturdays and weekdays a viable and sometimes even preferred option for many consumers. Although a buffet is still the preference for 57 percent of the surveyed brunch-goers, the number is down from 69 percent three years ago.

Consumers also say they want to see a mix of familiar and unfamiliar foods, like at Big Jones, with traditional breakfast meats like bacon, sausage and ham the top choice for 75 percent of respondents, followed by fresh fruit at 67 percent. Creative egg dishes (53 percent) rank slightly ahead of simple egg dishes (48 percent), but in either case, the most inexpensive protein to serve is the centerpiece. Juice is the preferred beverage at 45 percent, followed by coffee at 43 percent.

Adult beverages are the choice of only 13 percent, although that number surely grows as you move up the chain to higher-end restaurants. Those beverages, like mimosas and other specialty cocktails, can be a great revenue stream with attractive margins.

“Everyone was doing endless mimosas and all-you-can-eat buffet-style brunches, but the appeal of our idea was groups could try a wide assortment of menu items, while maintaining the full-service atmosphere Masa 14 is known for,” says Noah Loudenback, an operations director for Richard Sandoval Restaurants. Six months after starting the Bottomless Brunch two years ago, Masa 14 was booking Sunday brunches a month in advance. The same concept has now been extended to other Sandoval restaurants in DC, El Centro D.F. and Zengo.

“Rethink the wheel,” Loudenback suggests. “Don’t automatically replicate the same service you offer during dinners and lunches. Brunch is a different time of day, which affects the expectations and mood of your guests. Don’t be scared to make it less reserved and more of a party atmosphere.”

Loudenback concedes the unlimited ordering means operating with a higher food and beverage cost, but the overall volume and “magnificent level of public interest” makes it worthwhile. Plus, many guests order drinks off the regular, full-priced menu and stick around at the bar after the brunch ends, driving up the per-check average.

The challenge for many operators is staffing a popular and successful brunch service, which comes bright and early after the busiest and latest nights of the week.

Loudenback avoids scheduling any “close-open” shifts to ensure the staff is fresh and rested, and most of Fehribach’s brunch staff works only mornings. He says because of his restaurant’s reputation, it’s possible to recruit talent to work the early shift.

If staffing is a challenge, maybe the buffet is the right option. Or promote brunch only for special occasions like graduation, start of summer, Father’s Day or after local events, like a big church service or marathon.

The bottom line, according to Technomic? Brunch is a daypart with extremely broad consumer appeal, and a cost-effective one at that because of potentially lower food and operational costs. But you better go all in.

“Many do brunch to bring in some extra money,” Fehribach says. “If you staff it sparsely to protect margins in the early stages of a brunch promotion, you’ll shoot yourself in the foot because people want efficient, quick service. If you don’t deliver from the get-go, it won’t work for the long haul.

“The other key is menu—people love lots of choices, but you have to be careful not to look like everyone else, yet you can’t do food that’s too strange because people aren’t super adventurous at brunch. You need a menu that is large enough to convey abundance and a staff large enough to execute it.”