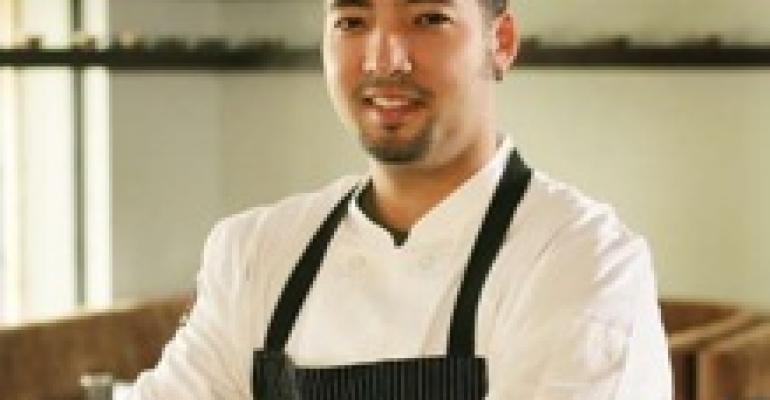 Nobody is Mugging Danny

When you're in the business of writing about food and restaurants, you can always count on the L.A. culinary machine. It seems a new restaurant opens there every other day, and each one strives to be more hip than the one that preceeded it. But, pardon us if we didn't get excited when press material crossed our desks for Celadon, an upstart Euro-Asian restaurant whose decor evokes a zen vibe that is de rigueur for any Asian place looking to attract the beautiful people

And Celadon, which refers to the pale gray/green hue of Chinese porcelain (who knew?), is doing just that. But this is L.A., where the flavor of the month can quickly get lost in the short-term memory of its fickle diners. Yet, Celadon will undoubtedly be remembered as long as chef Danny Elmaleh [el-mah-lei] is in the kitchen. The 31year-old's playground is in a dangerous neighborhood called Asian fusion, and we've seen more than our share of hotshot young chefs get mugged playing where they should not have been.

Perhaps it's Elmaleh's background that makes him as comfortable as he is agile blending cuisines. He was born in Haifa, Israel, to a Moroccan father and a Japanese mother. At age nine he moved to Kobe, Japan, where his father opened a Moroccan restaurant and a son's passion for serving others was born. Elmaleh attended the Culinary Institute of America, where he graduated in 1995. After the CIA, he returned to Japan, where he worked at Jean Moulin, a prominent French restaurant, and then he was off to Milan, where he cooked at Restorante Giannino

Elmaleh arrived in L.A. in 2001, and Josiah Citrin hired him to work at his contemporary French restaurant, Melisse. He later went on to become the executive chef of Lemon Moon, owned by Citrin and partner Raphael Lunetta.

Now, at Celadon, his cooking has caught the eye of Los Angeles magazine. "[Elmale's] approach to small plates has a refreshing playfullness . . . In a few bites, one has experienced a whistle-stop tour of contemporary [Euro-Asian] cooking at its best."