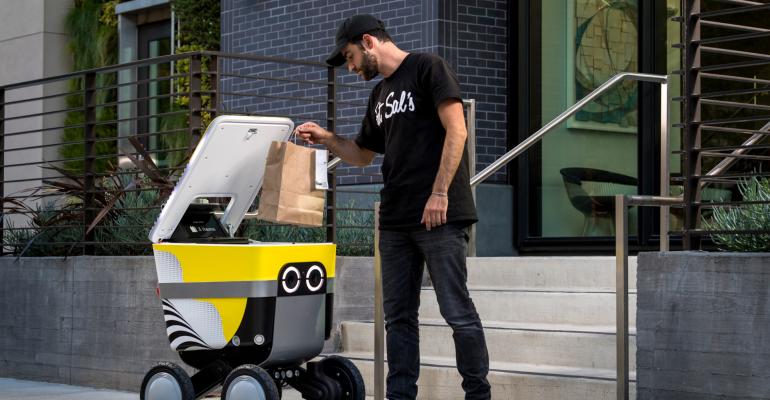 Uber joins other third-party delivery companies that have expanded their features and capabilities to keep up with the growth of on-demand culture in recent years.
Operations>Technology

Uber announced a host of new features for both its ridesharing and delivery programs, including order-ahead at stadiums

Uber announced a host of new products and services on Monday, expanding its repertoire into new categories like robot delivery, events transportation, and travel itinerary planning. In the delivery sector, the technology platform’s biggest announcements were the launch of an autonomous delivery pilot program in Los Angeles, voice ordering through Google Assistant and Uber Eats/ Postmates pickup at select sports stadiums.

With these announcements, Uber joins other third-party delivery companies that have expanded their features and capabilities to keep up with the growth of on-demand culture in recent years, like DoorDash’s self-driving vehicles that launched in San Francisco in 2019, Grubhub’s new sports stadium pickup, and expanded alcohol and grocery delivery across all of the third-party delivery platforms. Currently, Uber appears to be the only delivery company to offer voice ordering through Google Assistant

Here are the breakdowns of the most relevant announcements to the restaurant industry:

Related: Joanna’s Take: The future of food delivery apps hangs in the balance

Robot delivery is all the rage these days, with Kitchen United, Brinker, and Domino’s all testing and investing in driverless delivery technologies over the past year. Uber announced that the company is piloting an autonomous delivery program in Los Angeles. The program will have two AI vehicles: a sidewalk robot in partnership with Serve Robotics for short distances, and electric autonomous vehicles from Motional that can handle longer-range deliveries. If all goes well, the pilot could expand to other Uber regions.

Here's how it works: customers in available areas (Serve Robotics in West Hollywood and Motional in Santa Monica) will have to opt in to autonomous delivery when they place their order. From there, they can track their robot’s progress using the app and once their order arrives, use a secure code to retrieve their food.

Uber Eats and Postmates are partnering with Angel Stadium and Dodgers Stadium in Los Angeles, Yankee Stadium in New York, Capital One Arena in Washington, D.C., Minute Maid Park in Houston and PayPal Park in San Jose, with more to come. The feature allows customers to order food for pickup at the stadium and skip the line to grab food, alcohol and/or merchandise at the pickup counter when their order is ready with no delivery fees.

Uber also announced the integration of voice ordering with Google Assistant. For now, the feature only works with Android phones, and customers can place an order directly through Google Assistant. Customers will be able to personalize their favorite orders with the ability to say something like, “OK Google order my favorite salad from Sweetgreen” without having to say, type, or add anything else. The feature will be available in English for now, but will be rolling out internationally in other languages.