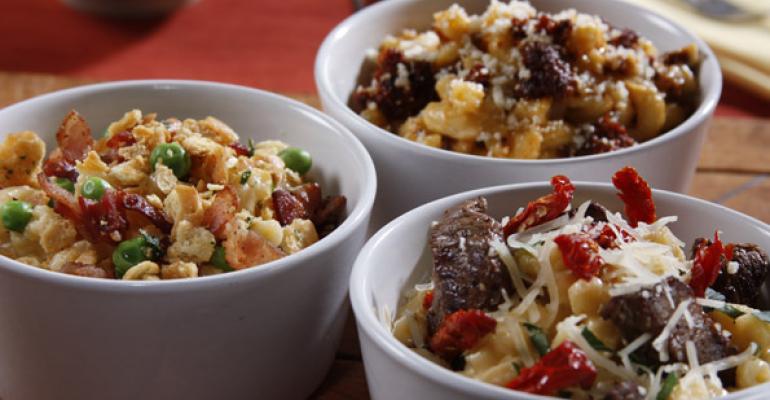 Taking Mac and Cheese to the Max

A special message from Barilla

Few dishes star in as many roles or please as many patrons as macaroni and cheese.

The quintessential American comfort food, with its irresistible bites of pasta embracing ooey, gooey cheese sauce, can be anything from a beloved kiddie meal to a down-home comfort food to a chef-driven signature. All the while, it’s a flavorful and cost-efficient alternative to costly proteins and a versatile performer that shines as a main course or a side dish.

Witness its rising profile throughout the industry. The number of mac and cheese dishes on restaurant menus increased by 77.8 percent between 2008 and 2012, according to the research company Mintel. Growth has been fastest in the casual dining segment, but also significant in the family, upscale, fast casual and quick-service segments.

Some of the best mac and cheese is made by operators who tweak a recipe they grew up with. “My fondness for mac and cheese never waned, but my tastes evolved,” says Andy Husbands, chef-owner of Tremont 647 and Sister Sorel in Boston. His signature Lobster Mac N’ Cheese is a mix of Barilla Elbow pasta, ridged and with an extra twist to hold the sauce, lobster mornay with Swiss and cheddar, fresh lobster and a crispy cracker topping. It is the culmination of a culinary journey that Husbands says began when he made mac and cheese from a box as a latchkey kid in Seattle.

Similarly, at Hot Chocolate in Chicago, chef-owner Mindy Segal’s popular mac and cheese uplifts the boxed product she happily recalls from childhood. As the menu promises, her straightforward combo of Barilla Elbows, cream and American and Gruyere cheese “never changes” and is “always a treat.”

A treasured family recipe was the inspiration for Kimberly Alvarez, owner of Jus’ Mac, a Houston-based, quick-service restaurant concept that interprets mac and cheese in creative ways. “When my husband and I were dating, I made my grandma’s mac and cheese for family and others who said we should sell this,” she says.

Barilla Elbow pasta is the firm and flavorful foundation of Jus’ Mac signatures such as the Hangover, which is topped with hash browns, a fried egg, pico de gallo and habanero salsa, and the Popeye, which features fresh spinach, onions and mushrooms.

The way Barilla Elbows keep their texture and stay flavorful in mac and cheese is advantageous in the high-volume kitchens of the University of Rochester Medical Center-Strong Memorial Hospital, a 760-bed facility in Rochester, N.Y.

“This is a 4 million-square-foot facility, and it feels like we cover every inch of it delivering patient trays,” says Al Caldiero, food and nutrition director. “We don’t see any problems at all with the pasta. It is probably the best pasta out there in terms of holding up and performing the way we expect it to.”

In a testament to its versatility, the same comforting mac and cheese that pleases patients is also a popular menu choice for the hospital’s retail customers, Caldiero notes, offered with optional mix-ins such as crabmeat, Buffalo chicken, Mexican chili, vegetables and black beans.

Of course, there are plenty of other pasta shapes that make mac and cheese distinctive. At Villa Fresh Italian Kitchen, a Morristown, N.J.-based, quick-service restaurant chain, an Italianate take on the comfort-food classic features Barilla Cellentani. The attractive corkscrew-shaped tubes have ridges that hold the sauce, according to corporate R&D chef Tom Law. The flavor profile, a blend of Alfredo sauce and tangy cheddar, is familiar and inviting to guests, he adds.

Quaker Steak & Lube, a casual-dining chain based in Sharon, Pa., tested both Barilla Cellentani, or “springs” in company parlance, and Barilla Radiatore for its mac and cheese before deciding that the radiator-shaped pasta was the perfect choice for the kids’ menu within the motor-themed concept.

“We weren’t sure that kids would accept a noodle shape other than elbows, but it has been a success since the start,” says Katy Malaniak, senior director of food and beverage, who adds that patrons of all ages enjoy the mac and cheese as a side dish.