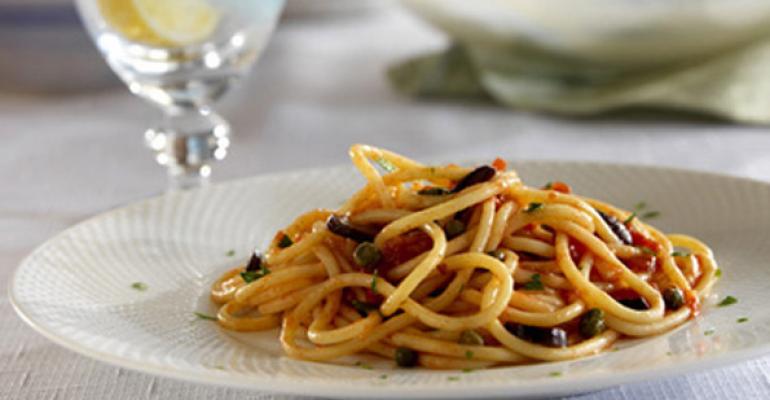 This is a special message from Barilla.

But at the same time, there is a growing appetite for pasta with new, authentic flavors and simpler, fresher preparations derived from regions of Italy that operators are starting to explore.

For example, Maggiano’s Little Italy, the 45-unit casual chain owned by Dallas-based Brinker International, menus Specialty Pastas that take cues from the local food of the Veneto and other Italian regions as well as some regional American culinary styles. They share the menu with a number of familiar red-sauced Classic Pastas.

“We want to continue bringing Italian-American cuisine to life,” said senior culinary director Keith Brunell. “We look at a lot of different flavor profiles and ask how we can very subtly add them to classic Italian dishes.”

By the book, spaghetti carbonara is a Roman preparation with a quick sauce based on pancetta, eggs and cheese. But at Maggiano’s it becomes Chef KB’s Lobster Carbonara, spaghetti tossed with smoked bacon, snap peas and garlic cream sauce. The addition of lobster as a “wow factor” further boosts its appeal, Brunell said.

In yet another example, Maggiano’s Rustic Chicken & Shrimp treats ziti pasta and other Italian ingredients the way a Louisiana cook might, building depth of flavor with prosciutto as one might use tasso ham and adding Calabrian peppers for warmth.

Dishes like those depend on the superior texture, flavor and holding ability of Barilla pasta to succeed.

“We like the way it stays al dente in our cooking processes,” said Brunell. “It is also very banquet-friendly and carryout-friendly for us.” The latter is particularly important for Maggiano’s, because it gives customers who order a Classic Pasta a free order of another Classic Pasta to take home. To carry that message of quality further with the consumer, Maggiano’s take-home bags are branded with the Barilla logo.

Pasta preferences in America are changing, according to recent Mintel research commissioned by Barilla. Although the total number of pasta dishes served at restaurants is growing, traditional pasta preparations like Alfredo and Lasagna are becoming less common, Mintel research shows. Lighter, more varied pasta applications seem to be taking up the slack. The research company suggested that restaurants explore upscale versions of familiar pastas and “be willing to go beyond traditional and known” in creating new items.

However, there is a fine line to walk between authenticity and familiarity on a menu, according to Matt Harding, corporate executive chef of Bravo/Brio Restaurant Group based in Columbus, Ohio.

“The guest of today wants to be comfortable in their environment,” said Harding, who oversees menu development for the group’s 98 Bravo Cucina Italiana and Brio Tuscan Grille restaurants. “The guest of tomorrow wants a little more authenticity. We are marching to that. But you have to please both masters.”

One way is to combine a familiar pasta shape with a less-familiar sauce, taking care to couch the dish in appealing terms. For example, take Bravo’s Fettucine with Swordfish. In Italy, the pasta preparation would be recognized as alla puttanesca, or pasta “streetwalker’s style” with a toss-up of tomatoes and robust ingredients.

“We don’t say puttanesca on our menu, we say ‘rich, hearty tomato sauce with capers and slivered garlic and pan-roasted olives,’” said Harding. “The flavor is great, but to succeed in marketing it to a large group of people you have to make it acceptable for them to try it.”

Added Harding, “There are 20 regions of Italy, each eating different things. I think the undiscovered pieces of regionality play into creating food that isn’t like everyone else’s food.”