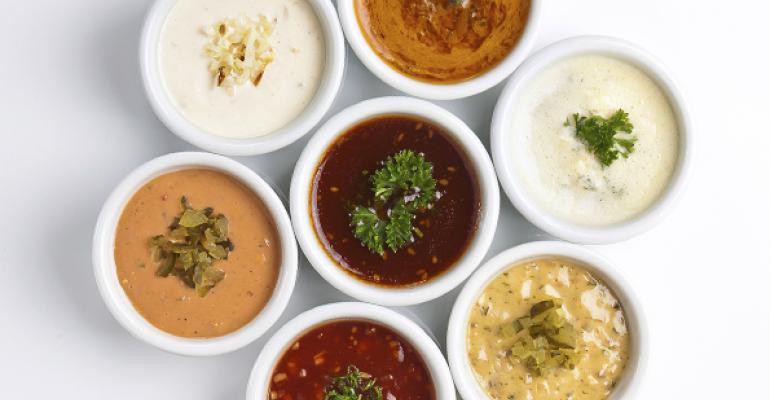 Restaurateurs take mayonnaise to the next level by adding a wide array of flavorful ingredients. Sponsored by Hellmann&rsquo;s&reg; and Best Foods&reg; Mayonnaise. Make more of your burger and sandwich business - visit Sandwich Solutions on Restaurant Hospitality.

Robust and flavorful sauces coming from back-of-the house are helping restaurant operators nationwide create new excitement for burgers, sandwiches and other menu items, much to the delight of guests.

Crowd pleasers such as rémoulade, aioli, sriracha mayo, pesto and Russian dressing are gaining momentum and giving ketchup and mustard some real competition as the finishing touch on a wide variety of sandwiches.

Technomic’s 2014 Sandwich Consumer Trend Report shows mayonnaise far out distances other condiments as a sandwich topping, coming in a favorite with 45 percent of the respondents for lunch and 43 percent for dinner. Its closest competitor, ketchup, garners a 33 percent favorable rating at lunch and 29 percent at dinner.

While mayonnaise gained acceptance with American consumers long ago, flavored mayos and sauces have recently taken its profile up a notch, adding new complexities and dimensions.

“Mayonnaise-based sauces give people that creaminess they are looking for, and when chefs add in sriracha, sundried tomatoes and pesto, it really elevates the excitement of the sandwich,” says Amy Myrdal Miller, president of Farmer’s Daughter Consulting, a culinary and nutrition communication firm.

Brian W. White, executive chef at The Hotel Northampton in Northampton, Mass., says the property currently features five mayonnaise-based sauces for its sandwiches, including lemon cilantro aioli on a garden chicken wrap and whole grain mustard rémoulade on a Cubano.

“There is a level of comfort with the general public involving mayo-based sauces,” says White, adding, “At the same time, it allows chefs to be creative and diversify their flavor profiles.”

At the year-old Odd Duck in Austin, Texas, Sam Hellman-Mass, who is chef and partner, adds roasted jalapeños and shishito peppers to the aioli that garnishes the widely popular restaurant’s grilled bacon sandwich.

Datassential’s MenuTrends report shows aioli, which is gaining favor with chefs, increased its listings on menus year over year by more than 11 percent in 2014.

John Russ, executive chef at Luke in San Antonio, Texas, says he is getting a lot of requests for spicier and more fermented flavors. “From the fancy sauce to the roasted garlic and saffron aioli, mayo is joining meat and bread as a necessary component for a sandwich,” he asserts.

Part of mayo’s popularity is its ability to enhance the flavors of a wide range of other ingredients, which is part of its growing attraction.

“Mayo is such a great, neutral carrier for an incredibly wide range of flavors, from familiar to ethnic, that it becomes a real kitchen work horse for the operator,” Webster says. As examples she cites familiar flavors such as mustard, bacon and tomato, and ethnic flavors like curry, sriracha and tahini.

“As many operators look to make each ingredient work as hard as possible to maximize the ingredient spend, mayo can be doctored to create unique sandwich sauces, as well as countless dips and spreads that work on items across the menu,” Webster adds.

Adin Langille, executive chef at New York’s fabrick, David Burke’s newest DBG property in midtown Manhattan, created an aioli sauce using mayonnaise and Burke’s proprietary Primehouse steak sauce. He uses it to top ground brisket with American cheese and bacon and sells it for $18. In addition, it is served on the side as a dip for fries.

Langille also menus a chipotle aioli to finish off the restaurant’s tuna burger, which is made from fresh sushi grade tuna with chili oil, ginger and cilantro, and topped with papaya slaw tossed in a Thai vinaigrette. The burger sells for $22.

“Mayo is delicious and it adds balance to a sandwich,” Langille says. “It not only brings lubrication to hold everything together, but it is part of the integrity of the sandwich. These flavors resonate with consumers because you don’t see them at every restaurant.”

Webster says sandwiches are the perfect carriers for mayo-based sauces because just about every culture enjoys some version of the hand-held item.

“Just as mayo can make a sauce approachable, the sandwich format makes almost any ingredient approachable,” she says. “That’s why we’ve seen sandwich varieties from other cultures, such as banh mi and tortas, grow so quickly in this culture. If it looks like a sandwich, people will feel a lot more comfortable experimenting with it. Sandwiches are relatable to almost everyone from nearly every culture.”

With America’s changing demographics and expansive embrace of ethnic cuisines going nowhere but up, it’s a safe bet the bar on innovation will also be raised, opening the door for even more creative sandwich, burger and other menu offerings.

Clearly, innovative sauces will be a big part of the ongoing sandwich revolution.

“These mayo-based sauces bring a sandwich from average to delicious,” says fabrick’s Langille. “I would absolutely love to shake the person’s hand who invented mayonnaise.”