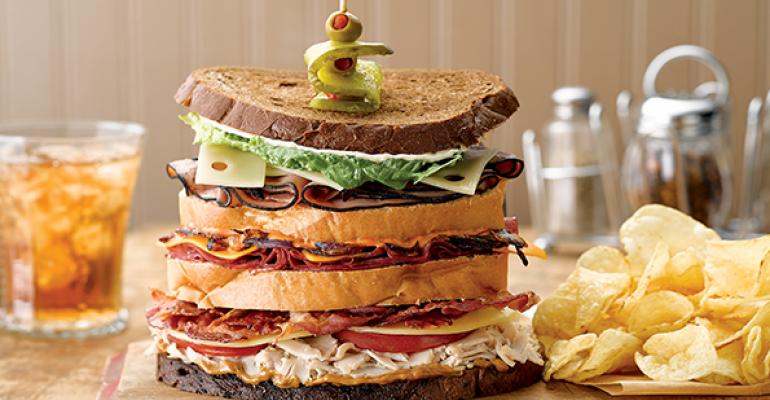 In response to the demands of an increasingly sophisticated customer base, foodservice operators are debuting more robust flavor profiles across the sandwich segment and are going ethnic and upscale, as well as fresh and local.

“There’s a lot going on with sandwiches,” says Maeve Webster, senior director of market research firm Datassential. “We are seeing a lot of ethnic influences, including different spreads, garnishes and toppings in order to make the standard sandwich pop.”

Webster cites ingredients such as curry, tomato chutney and balsamic mayos; higher-end garnishes like arugula, pickled vegetables, fennel; and toppings such as sweet and savory jams as evidence of an evolving sandwich landscape.

By paying closer attention to detail and driving innovation operators are hoping to push that number skyward.

Specialty mustards and mayos, toppings such as kimchi, spicy flavors like habanero and poblano, and sauces like Sriracha and Tzatziki, are showing up on more menus nationwide.

She cites examples such as Smashburger’s new burger topped with truffle oil and garlic-grilled mushrooms, and Caribou Coffee’s new line of sandwiches, which includes Turkey Brie with pepper jam on baguette and Roast Turkey Ciabatta with aioli pesto spread.

“There is a real culinary sensibility at work here, and I think we’ll see more of these premium, specialty toppings as a means to both add value and competitive differentiation.”

“Operators are trying to find easy ways to create innovative sandwiches without pulling in a lot of specialty products that can only be used on the sandwich menu,” she says.

Fresh To Order, the Atlanta-based fine, fast-casual, 12-unit chain, is putting a big emphasis on upgrading the sandwich line by examining each component.

“We have been focusing on our burger sandwiches lately like our house-made Tuna Burger with Asian Slaw, our house-made Black Bean Burger with house-pickled jalapeños and roasted corn relish, and our newest house-made Bison Burger kills it,” says Jesse Gideon, the chain’s chief operating officer.

“Sandwiches are continuing to grow and become more popular at both lunch and dinner,” says David Groll, executive chef and director of culinary development. “People are continuing to explore lighter, better-for-you sandwiches, and they are focusing on veggies and even fruit like green apple.”

McAlister’s also has switched from avocado slices to guacamole on sandwiches because it is healthy, spreadable and a flavor people crave. Avocado-flavored influences are growing to such a degree that Kruse calls the green fruit “the ingredient of the year.”

Earlier this year a campaign, “Love at First Bite,” took to the Chicago streets with a food truck promoting signature sandwiches, burgers and wraps from participating restaurants. The goal was to prove that just one bite could turn a walk-in restaurant customer into a regular.

Sponsored by Hellmann’s® and Best Foods®, the two-day event celebrated the creative handiwork of local chefs as well as introduced new flavors and sandwich varieties to local patrons.

And as McAlister’s Grill points out, new flavor profiles are key to building traffic and driving sales.

“Innovation, even with classic sandwiches, is helping to grow our brand,” he says. “People are more willing than ever to explore new flavors and preparation techniques. And we are trying to answer that demand.”

Datassential’s Webster concurs that flavor coupled with technique is an unbeatable combination.

“We are seeing a huge focus on preparation. It’s no longer onions on a sandwich; it’s caramelized onions. Vegetables now are being roasted and that’s certainly impacting sandwiches,” she says.

“Careful preparation combined with each flavor ensures a richer sandwich experience once it’s all pulled together.”