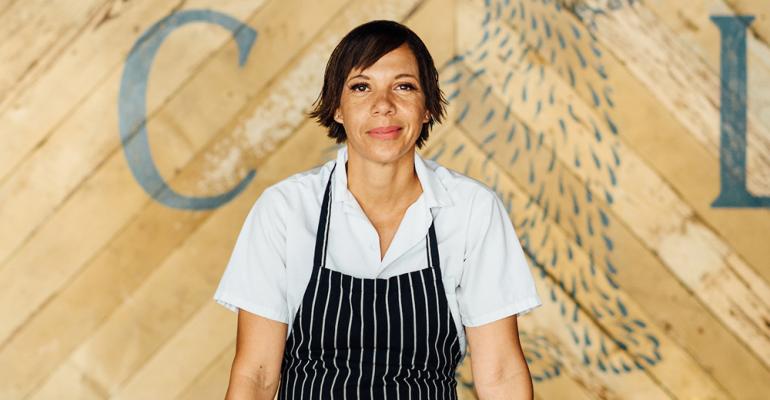 On the Rise: Nina Compton

Restaurant Hospitality has identified 12 chefs and restaurateurs who are getting ready to break out. They are ones to watch now. See the full list >>

For Nina Compton, chef and co-owner of Compère Lapin in New Orleans, 2017 was quite a year. She was named a Best New Chef by Food & Wine magazine, and she was a finalist for a James Beard Award as Best Chef of the South.

This year, Compton and her husband and business partner, Larry Miller, are running with the momentum. In March, they will open their second concept in New Orleans, called Bywater American Bistro in a former grain mill. A seared tuna dish planned for Bywater American Bistro, which is scheduled to open in March.

Collaborating with Compton in the kitchen is Compère Lapin’s sous chef Levi Raines, who will serve as chef and partner at Bywater. The menu, which is still in development, will feature housemade pasta, French-inspired charcuterie and grain-based dishes, like farro risotto with maitake mushrooms and minted breadcrumbs.

“There will be some Caribbean elements too,” she said. “We’ll be doing a curried rabbit, and there will likely be goat on this menu, too.”

Born in Saint Lucia, Compton said her goal has always been, “to introduce people to Saint Lucian and Caribbean food in a way that’s approachable. So I bridge the gap between what we, as locals, might eat on the island and food that everyone will enjoy.” Saint Lucian locals eat green fig and saltfish, “but not every person would enjoy that,” she said. Instead, Compton attempts to fuse the cuisine with the familiar, as with her curried goat and sweet potato gnocchi.

Compton is a Culinary Institute of America grad who has worked in top kitchens, including Daniel in New York, and Norman’s in Miami, and later the Palme d’Or at the Biltmore Hotel in Coral Gables, Fla.

She later became chef de cuisine for  Scarpetta before a stint on “Top Chef” brought her to New Orleans. Compère Lapin, her first restaurant, opened in 2015.

When asked what’s next, Compton preferred to focus on what’s in front of her.

“I’m just concentrating on both restaurants and delivering our customers great food and service,” she said.