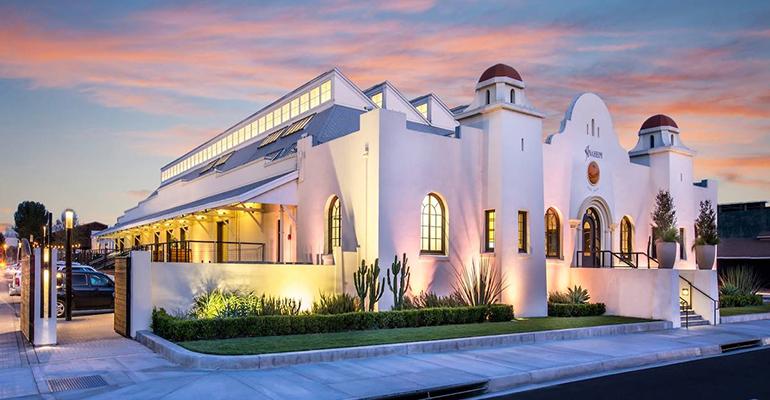 From utilizing outdoor spaces to investing in virtual entertainment and online ordering, food halls are keeping up with social-distancing norms in new and creative ways

Despite the obstacles, food halls are evolving like the rest of the restaurant industry to survive the COVID-19 crisis, which is worsening across the nation.

Culinary walkabouts — stretching from Southern California to Nebraska to Texas — are determined to adapt to maintain their communal spirit. Some are hosting socially distanced cornhole games, virtual Bingo, live outdoor music and virtual food events to keep diners together safely, while others are offering a digital food hall experience for the first time with contactless pickup and delivery from any of their vendors.

The 25-tenant food hall is housed inside a 42,000-square-foot turn-of-the-century citrus packing plant. Sadeghi spent years painstakingly restoring the historic building in Anaheim, Calif., not too far from Disneyland.

When it opened in 2014, he hoped it would be reminiscent of classic food markets like Grand Central Market in Los Angeles and La Boqueria in Barcelona.

The communal space has been wildly successful, triggering Sadeghi to gobble up surrounding land to expand his vision by adding breweries, wine bars and more dining.

In California, the pandemic has been especially turbulent. In early June, the chef-driven restaurants at the packing house resumed dine-in service.

“We were turning people away,” Sadeghi said.

But in mid-July California Gov. Gavin Newsom halted indoor dining again in response to a surge in coronavirus cases throughout the state.

That forced the eclectic food hall to transition again after being reopened only a month.

The food hall sits on a two-acre space that houses a parking lot, a boardwalk, a few other restaurants including Umami Burger, green space and a brewery. Sadeghi “activated” open spaces to ensure there’s enough al-fresco dining to accommodate customers.

“It’s a nice luxury to have,” said the former Quiksilver president.

Determined to keep the food hall’s communal atmosphere, Sadeghi has brought back live music and movie nights in the outdoor green spaces.

For those who are not yet ready to gather, the Anaheim Packing House offers drive-up service from some of the food tenants.

Most nights are packed, underscoring Sadeghi’s belief that food halls serve a purpose — to bring people together — even during a pandemic when people must be seated six feet apart.

Much is the same at Legacy Hall in Plano, Texas. The 59,600-square-foot food hall contains four full-service bars and 18 restaurant stalls with cuisine options that range from sushi to fried chicken.

The developer, The Food Hall Co., has modified the space to meet local rules for social distancing by using a reservation system to book tables and control capacity. Live music and movies have also returned at the food hall, which in 2019 hosted more than 400 events that generated about 2 million visitors.

The food hall has managed to bring people together, even selling out seats on certain nights.

“There's such a pent-up demand for people that want to get out and be social,” said David Daniels, senior vice president of marketing at The Food Hall Co. “We want to be able to offer that environment.”

Inner Rail Food Hall in Omaha, Neb., and 4th Street Market in Santa Ana, Calif., on the other hand, are taking a different approach to bringing people together.

He took advantage of the closure by remodeling and bringing in a new set of tenants for most of the spaces. Since its inception five years ago, Chase has used the modern food court as a haven for operators looking to incubate concepts. Most restaurateurs, who operate in small stalls, sign one-year leases.

The few tenants that remained after their closure in March kept operations open for takeout and delivery, including Alta Baja Market, which sold meal kits and groceries.

Foreseeing the need for more outdoor space, Chase worked with the city to create a makeshift patio in front of the food-hall building. He turned four parking spaces into a “parklet” that can fit about four tables, adding to the eight tables already on the sidewalk. 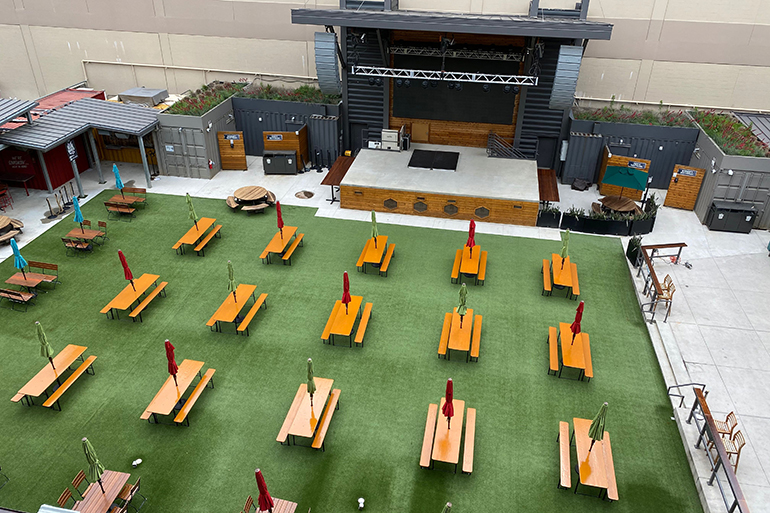 Tables at Legacy Hall in Plano, Texas are spaced at least 6 feet apart near an outdoor stage.

The developer also reconfigured the food hall’s outdoor lounge, which previously housed long, communal picnic tables. Those tables have been cut in half to create more spacing between groups.

“There are so many facets of a food hall where you can lounge, where you do your homework and have meetings,” Bobby Navarro, spokesman for 4th Street Market, said. “It’s more diverse than a traditional restaurant and we’re trying to figure out how to replicate that social experience.

One social experiment came July 11 when the food hall had its grand reopening and Taste of 4th Street event, which showcases their new vendors every year.

This year, the event was part-digital customer experience and part-socially-distanced in-person event, with limited front and back patio seating and live streamed music. The virtual part offered “taste of” food packages online for contactless pickup. A $90 taste package included the choice of food from 15 vendors, or smaller meal kits. Other offerings included a DIY butcher kit, where guests could purchase meat kits from 4th Street Market’s Electric City Butcher and have questions answered about the meat.

Navarro said 4th Street Market will be introducing similar monthly or quarterly virtual events and will continue to emphasize their pickup and delivery options to meet state regulations and customer comfort levels.

“We’re trying to create options for everyone and build those needs and it’s been a challenge,” Navarro said. “As we reopen, we will likely have too many people trying to get to the patio, so we’re limiting it to one entrance and having security so people can feel safe.” 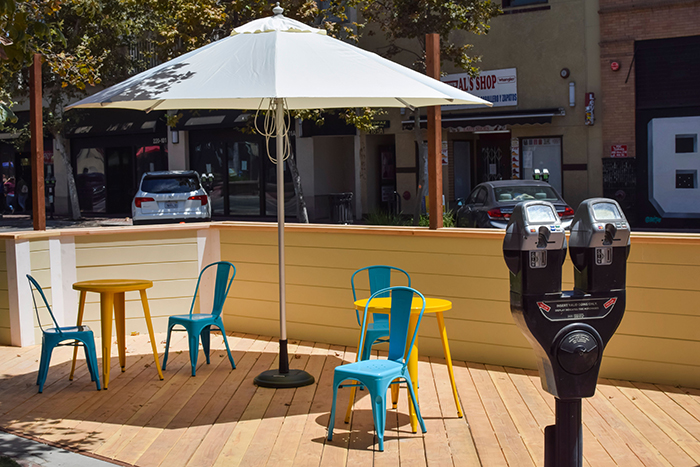 Creating a COVID-19-era floorplan and expanded outdoor space has been crucial for Hospitality HQ, as well. The company owns four restaurants and one food hall in Omaha. Two more food halls are coming to Chicago and Houston this year.

“One of the biggest challenges in Omaha was having to close and retrofitting the place to be compliant with coronavirus regulations,” Nawab said.

The silver lining: At Dr. Murphy’s Food Hall in Chicago, set to open ion August 3, construction and design crews can “get in front of these regulations” because they’re working with a clean slate. Despite the circumstances, construction was only delayed seven-10 days because of the pandemic.

Dr. Murphy’s and Inner Rail are also focusing on contactless ordering, where customers can “order food from multiple vendors with one credit card, choose a timeframe, and pick up at the concierge at the food hall,” Nawab said.

The contactless digital order and payment choices are available currently at the Inner Rail Food Hall through the food hall’s POS system. Dr. Murphy’s food hall in Chicago will use a slightly different solution when it opens.

“We’re creating those types of things where you can minimize contact down to zero where you order,” Nawab said. “When you go to the food hall, you talk to concierge and pick it up yourself. […] We’re anticipating a large number of takeout and delivery and pickup for the food hall as a whole because of this.”

Legacy Hall’s Daniels said contactless ordering is being used widely among dine-in customers at its food hall. After sitting at their reserved, physically distanced table, people can pull out their phone and order food from any one of the Hall’s eateries and bars. Once the order is ready, they get a notification on their phone.

“All you have to do is walk to go pick it up,” he said. “We’ve done everything we feel we can do to ensure a comfortable environment and drive customer confidence.” 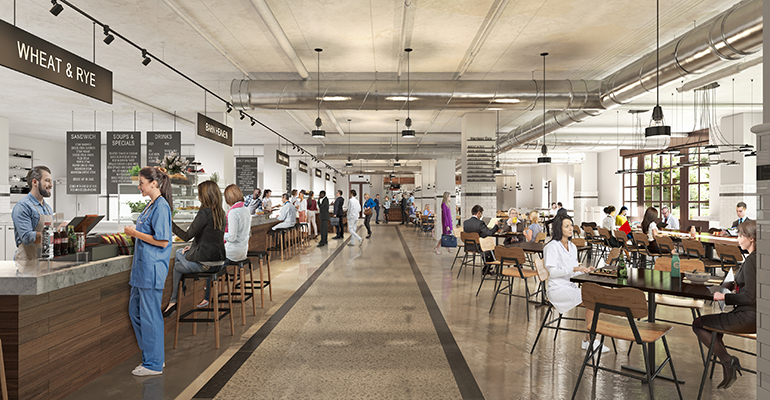 To control occupancy on nights where there’s live entertainment, the company charges a booking fee with each reservation. Daniels said the fee can range anywhere from $20 for a four-top table to $45 for a six-top.

Customers don’t seem to mind, and in some ways, the system is an improvement to the standard ordering experience at most food halls.

Previously, food-hall customers from the same party would have to stand in different lines to fetch their food, only to meet up later at a communal table.

Now, at Legacy Hall, they can be together at a table and order their food without waiting in long socially distanced lines.

“On evenings where we’ve had live entertainment, we’ve sold out,” said Daniels, whose company is building a second food hall in Nashville.

Nawab said the pandemic isn’t changing the core mission of the food hall. Operators are just having to think differently about giving “people what they want and how they want it in a new way,” he said.

Sadeghi agrees. While no segment of the industry is risk-free from the pandemic, he believes food halls are in a much better position to survive versus large-footprint casual-dining restaurants.

Why? Most food-hall restaurants occupy stalls that span about 500 square feet to 1,000 square feet. They don’t have the kind overhead and labor costs associated with large full-service restaurants.

“I think the economics and the matrix of a food hall is definitely still valid,” said Sadeghi, known for creating two well-known anti-malls in Southern California.

Sadeghi’s next project, dubbed The Press, will be located inside the former Orange County bureau of the Los Angeles Times. The 70,000-square-foot building is expected to house more than 40 retailers and restaurants and will feature, like the packing house, another two-acre park.

“It's really more of a social hall,” Sadeghi said.

He’s adamant that people — even in a post-pandemic world — will continue to seek these high-energy social experiences.

“I think the day that we as human beings stop gathering, it’s going to be the end of the world,” he said.