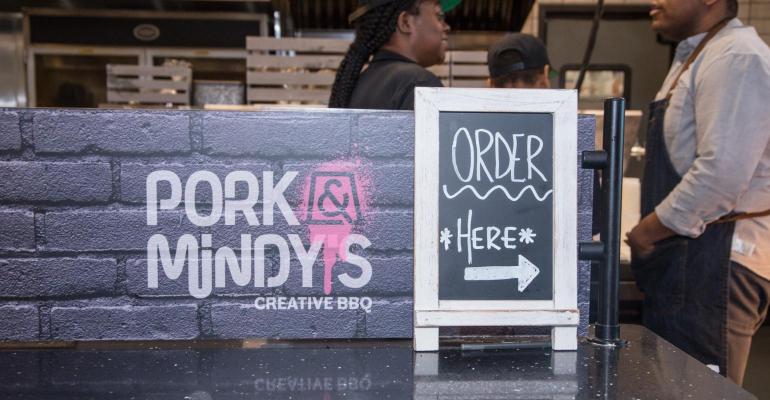 The news happened less than a year after the PHI Holdings-owned restaurant brand announced a March 2019 deal with Kroger Co.-owned Roundy’s Supermarkets, Inc that would have opened 28 more locations inside Mariano’s grocery stores, as initially reported by Supermarket News.

When Jeff Mauro opened the first Pork & Mindy’s in 2016 in Bucktown, Ill., the “Sandwich King” host had plans of international expansion for the “creative barbecue” concept with a menu of mainly pork-based “sangwiches,” salads, and tater tot dishes.

The partnership with Mariano’s was originally supposed to be a growth vehicle for Pork & Mindy’s, which at the time had goals of expanding to 30 locations by 2020.

But that all changed in August when Mauro closed the flagship Pork & Mindy’s location: the first sign of trouble for the apparently struggling chain. Mauro said at the time that the space would be converted into a delivery-only restaurant, private event space, and training headquarters called QU, according to Eater Chicago. QU would act as a barbecue university for Pork & Mindy’s team members and creative space, but would not be open to the public.

According to the bankruptcy filing, the company’s assets and liabilities are worth between $1-$10 million, and one of the top creditors associated with the case is the NFL football team, the Chicago Bears (In 2017, Pork & Mindy’s had partnered with the Chicago Bears to sell their candied bacon product, “Pig Candy” as a concession at the team’s football games).

An initial hearing to hear the bankruptcy case was held on Nov. 12.

The website and social media pages for Pork & Mindy’s are still up and running — with no signs of closure announcements — but the phone numbers for the restaurants appear to have been disconnected.

Representatives from Pork & Mindy’s did not respond to request for comment.