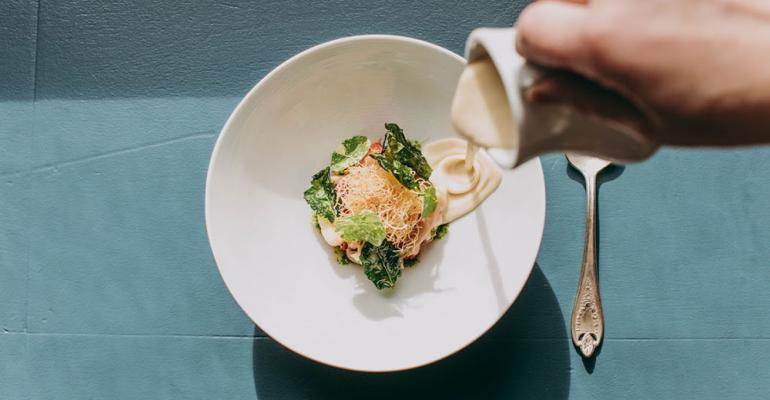 Buying what’s in season locally is just the start: here’s how some restaurant operators are taking the sustainable menu to the next level

When it comes to crafting a menu with sustainability in mind, phrases like “farm to table” and “locally grown” have become commonplace and buying what’s in season is a given for any conscientious restaurant.

So what is the next level of sustainability?

From putting more plant-based foods on the menu to being intimately aware of who you’re buying from in the supply chain, Earth-friendly menus are constantly evolving.

We spoke to three operators about the process of creating a sustainably-conscious menu, from knowing which fish to avoid due to overfishing, to making sure no portion of a product goes to waste.

Using every portion of an ingredient

Strawberry leaves, carrot tops and cauliflower stems are never thrown away at Heirloom, an American restaurant in Lewes, Del., owned by entrepreneur Meghan Lee. Instead, they’re turned into kimchi or pickles.

“I always say, ‘if you have to peel the garlic, you don’t deserve to use it!’” Heirloom executive chef Matt Kern said.

Kern loves using ingredients that people would normally throw away to elevate a dish or to create something entirely new. Scallop “feet” are usually thrown away but at Heirloom they’re cured, smoked and dehydrated to make Japanese katsuobushi flakes (bonito flakes).

The restaurant also buys non-poisonous blowfish (which is usually considered a bycatch) and frys them up “just like chicken wings.” They also have a tilefish dish on the menu that’s topped with pureed carrot made from carrots that the farmers needed to sell and flavored with citrus juices from leftover fruit from the bar.

“Anyone can make expensive ingredients taste good but if you can shine and show superior cooking techniques with leftovers and unwanted ingredients you are hitting a market,” Kern said.

Making use of foraging

Heirloom also makes use of foraged ingredients, though Kern said that he turns to an expert forager for help with finding the best and edible ingredients in Delaware and Northern Pennsylvania.

“She comes in and forages in the region and brings us chicken-of-the-woods mushrooms, lobster mushrooms, and whenever they’re available we’ll run a special,” Kern said, adding that they treat the mushrooms like proteins and showcase them as the main ingredient.

Being aware of seafood no-nos 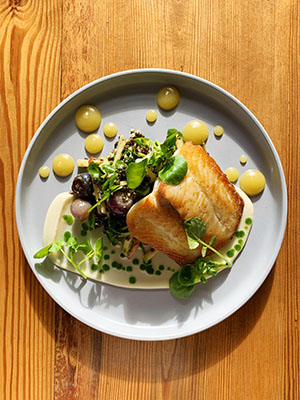 Photo: Heirloom will never have bluefin tuna on the menu, as the species has become overfished.

Many self-proclaimed sustainable restaurants will have a list (official or unofficial) of ingredients they won’t use, particularly types of seafood. Heirloom for example, will never have bluefin tuna on the menu, as the species has become overfished. In fact, the restaurant tries to avoid the more common seafood like tuna, salmon, halibut and mahi mahi for reasons of overfishing or unsustainable practices, instead opting for options like striped bass and steelhead trout.

For Pacific Catch, an 11-unit, California-based seafood restaurant, the question of which ingredients to use or not use changes on a case-by-case basis.

“We don't want to start to develop menus that have an over dependence of certain species like tuna,” Jennifer Bushman, director of seafood sustainability at Pacific Catch said. “With the level of popularity that yellowfin tuna is we are having issues with stock. So, we may only use it in our poke bowls and keep it light on the appetizer menu.”

Knowing not everything will be available all the time

Particularly for a seafood restaurant like Pacific Catch, staying on top of the latest information from fisheries and fish farms is crucial.

“The challenges are staying ahead of something we sourced, like for example, our lobster, has an entanglement issue with the North Atlantic whale,” Bushman said. “If a fishery goes from let's say a yellow or green rating [with the Monterey Bay Aquarium] to a red, we have to react quickly.”

Instead of using a premium fish like mahi mahi, which is not available locally, they might use a rockfish on the menu instead. Another example is squid, which Bushman said is tough to source sustainably and most of it is caught wild rather than farmed. 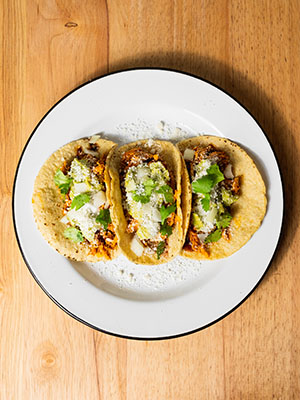 Photo: Fields Good Chicken just introduced a zero-waste chicken taco as an Earth Day special that will likely be added to their menu permanently.

“Fried calamari, for example, may be a popular menu item, but [the squid] is only available certain times of the year and then we make sure to reserve stock that's been caught in order to be able to supply what we estimate we're going to need,” Bushman said.

Not being afraid to go frozen

Although fresh-caught seafood certainly sounds better on a menu, for most restaurants it makes sense to buy frozen much of the time, simply because it’s more sustainable.

“Frozen is the new fresh,” Bushman said, “and it has a lower carbon footprint. So, we always look if we can source something frozen, which would be more sustainable than flying in that fresh fish.”

Swordfish, for example, has high demand on their menu, but they only source it from two boats off the coast of California so that’s only available on their fresh catch menu for a limited time, and then they will lean into using freezer storage to stockpile for off-season months.

Another trend restaurants are leaning into is creating individual zero-waste, carbon-neutral menu items from leftover scraps in their kitchen. New York City-based rotisserie chicken chain Fields Good Chicken just introduced a zero-waste chicken taco as an Earth Day special that will likely be added to their menu permanently.

Fields Good Chicken CEO Field Failing got the idea to create the menu item after trying to brainstorm a way to utilize their leftover rotisserie chicken that does not get used by the end of the day. The taco is marinated and topped with other ingredients, like onions, cilantro and sauce that they already have in the store (except for the tortillas which they get from a local company in Yonkers). Any leftover tortillas can get fried up as tortilla chips.

“We simmer the meat until it takes on that flavor and you’d never know it’s the same item that goes in our bowls and entrees all day,” Failing said.

Although this is just one menu item that they’ve changed, Failing said it’s okay to start small in creating a sustainable menu. Eventually their goal is to be 100% completely carbon-neutral and that starts with one taco made from leftover rotisseries chicken.

“One of the things I’ve learned over the past several years is to start small,” he said. “It’s easy to be caught up in the lofty goal and then you don’t do anything. Small steps add up.”