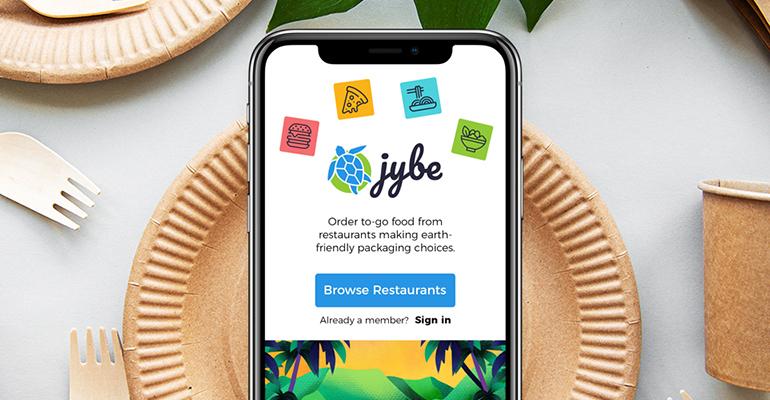 JYBE
JYBE lets users search for restaurants by how green-friendly their delivery practices are.
Operations

Green Tracker: How food delivery is getting a sustainability makeover

A campaign to stop needless plastic cutlery, and an app that ranks restaurants based on how green-friendly their takeout practices are

As safe, contactless delivery continues to grow in importance during the pandemic, the use and disposal of to-go packaging is becoming a source of mounting concern.

Many customers have gone from reusing silverware in restaurants to throwing out plastic cutlery from their takeout bags, and from having their food arrive on a hot plate to getting it delivered in a plastic bag (or several). The difference is so stark that the International Solid Waste Association estimates that the consumption of single-use plastic may have grown by 250-300% during the pandemic. And the majority of that waste is piling up in landfills.

Related: This San Francisco pizza startup will sell ‘trash pies’ made out of food waste

Here are some examples of how vendors, advocates and a local legislature are countering this growth in plastic waste.

From waste reduction advocacy organization Habits of Waste comes a movement to make the switch from customers opting out of receiving plastic cutlery with their takeout orders to opting in.

#CutOutCutlery launched in 2019 and has already convinced Uber Eats (in September 2019) and Postmates (in October 2019) to now require customers to request cutlery, to discourage restaurants from automatically including the plastic-wrapped disposable utensils in every order.

Postmates told Habits of Waste that they estimate they have already stopped 122 million packs of cutlery from entering the waste stream since making the switch a little more than a year ago.  When people do have a choice, Habits of Waste estimates that only 25% of delivery customers choose to receive cutlery.

Their next target is Grubhub and DoorDash. Both food delivery apps have still not responded to Habits of Waste founder Sheila Moravati’s request to change their default settings from a cutlery opt-out button to an opt-in button.

“People prefer to eat with heavier utensils, they’re ordering in and they don’t want the cutlery, and it’s an unfortunate thing to go out in a waste steam,” Moravati said. “In Los Angeles, they see a lot of plastic containers in the trash but not much cutlery because it sits in people’s drawers since they feel too guilty to throw It away.”

Recently, #CutOutCutlery partnered with BuzzFeed to put out a video of celebrity endorsements about combatting plastic waste in food delivery and takeout, with appearances from Laura Dern and Adam Devine.

Moravati and her team also hopes to make a difference via legislation as well. In June 2018, she co-authored a piece of legislation in Malibu that banned plastic straws, stirrers and cutlery. But she’s also working on getting similar legislation co-authored in Los Angeles and says that state Sen. Ben Allen has already worked with them to introduce a bill to phase out plastic cutlery.

By now we’re used to seeing crowd-sourced rankings of restaurants on food delivery apps, but JYBE is a new app that launched in September 2020 in the San Francisco and Los Angeles regions that helps customers find restaurants with green-friendly takeout and delivery policies.

The crowdsourced app ranks restaurants that offer options like biodegradable or reusable containers higher and make them show up more prominently when users search for restaurants in their area.

Currently with 4,100 monthly active users and with more than 40,000 restaurants on their platform, JYBE is expanding to Portland, Ore.; Seattle; Austin; and Denver/Boulder, Colo. on Jan. 1, 2021.

“We were all set to launch our app in March 2020 when COVID and the global health crisis set in,” Alison Diamond, CEO and cofounder of JYBE said. “[…] As the restaurant industry pivoted to meet customer demand for in-home dining, single-use plastic demand soared in lock-step. We realized JYBE was more necessary than ever if we were going to make an impact.”

The app aggregates restaurant ratings based on “user-generated reviews of takeout packaging” and each review is then vetted and analyzed by their team. Currently the app has more than 2,500 reviews of individual restaurants.

“It’s a place for us to further educate ourselves and our users on all things waste, while also providing custom callouts and high-fives to restaurants making Earth-friendly choices,” Diamond said.

New York Gov. Andrew Cuomo signed legislation on Dec. 3 banning food packaging made with PFAS (per- or polyfluoroalkyl substances), the substances dubbed “forever chemicals” because they do not degrade or break down in a timely manner. These chemicals are typically used as “de-greasing agents” in delivery and takeout packaging, but moving forward, the sale and distribution of products made with these chemicals will be disallowed in New York State.

“PFAS chemicals are pervasive in food packaging and have been linked to serious health problems that can put consumers at risk,” said Dr. Michael Hansen, senior scientist for Consumer Reports, in a statement. “This law will protect New Yorkers by reducing their exposure to PFAS in the food they eat and by curbing the amount that contaminates the air and drinking water.”

In 2019, we reported that “a growing number of studies have raised concerns that these chemical compounds could be toxic and are seeping into the soil and waterways,” including a connection between consumption and negative health impacts like immunotoxicity, cancer, thyroid disease, birth defects, and decreased sperm quality.