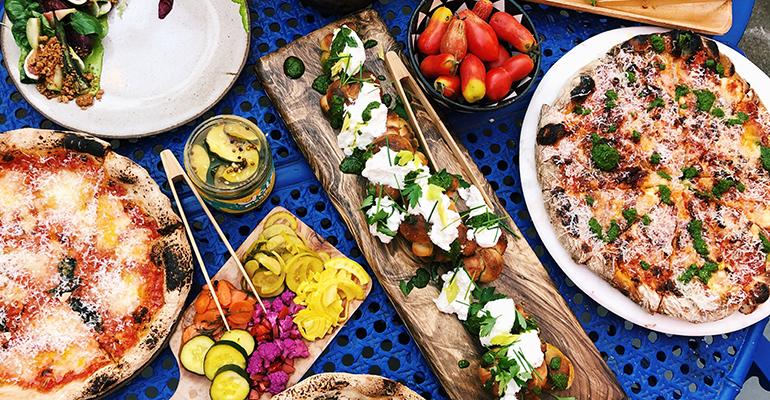 Ugly Pickle Co.
Shuggie's is going to sell pies made with unusual/"ugly" ingredients in an effort to combat climate change.
Trends>New Restaurant Concepts

Shuggie’s Trash Pie & Natural Wine is opening in Spring 2021 with a menu of ingredients like offal, ugly produce, and leftover spent grain from breweries

Shuggie’s — a San Francisco-based startup set to open in spring 2021 — is raising money on Kickstarter to open their pizzeria concept with a twist: a menu of woodfired pizza pies made out of food waste. Aptly named “trash pies,” each pizza (and other menu items) will be made with oft-discarded ingredients like offal, ugly produce, and leftover spent grain from breweries and oat milk facilities.

Shuggie’s comes from the minds behind the Ugly Pickle Co., a San Francisco pickle company with a similar concept and mission of selling gourmet pickles and spreads made from discarded produce and plant parts, like their carrot top chimichurri and roasted root hummus.

Chef David Murphy and Kayla Abe, who has a background in sustainable agriculture, opened Ugly Pickle Co. together two years ago after meeting and collaborating at a farmer’s market. What started out as a way to support their farmer colleagues by purchasing unwanted produce that was under/oversized or misshapen to make sauces, spreads and pickles, became a pickle company with a message of impacting climate change through food waste reduction.

Two years later, the Ugly Pickle Co.is being nominated for two Good Food awards and Murphy and Abe are ready to begin their next green-focused venture. Shuggie’s Pizza, they say, is natural offshoot of the Ugly Pickle Company:

“Food waste was always a sore spot in our food system and it’s the number one way we can affect climate change,” Murphy said. “Climate change and helping farmers is our focus, along with making tasty things. Tackling a topic like food waste through something like pizza makes the issue super approachable. We want to show people you can minimize food waste in your everyday life.”

When Shuggie’s opens in the first quarter of 2021, the menu of pizzas, salads and natural wines will be made with ingredients like stems and leaves from plants like carrots and cauliflower for salads and herbaceous sauces, offal jowl and deep-fried brains and as many other “off-cuts” as they can incorporate (pepperoni, for example, will never be an off-cut, Murphy said), and “ugly” tomatoes and bell peppers from the local Lucero organic farms in Sacramento County.

“As soon as you slice up an ugly radish it looks exactly like a beautiful radish on the inside,” Murphy said.

While Shuggie’s may not necessarily be adding jowl and fried brains pizzas to the menu anytime soon, these different cuts of meat will be appearing in other entrees.

“Seeing these off-cuts as scary is such a cultural thing,” Abe said. “So many cultures around the world eat these delicacies and we’re not as well-versed in them, so we’re introducing more people to them so they can eat more sustainably.”

But Murphy said it’s imperative that their pizzeria is well-known for having delicious pizza not just as a gimmick with brains on the menu. They’ll be serving Neo-Neopolitan pizza with a crispier crust than traditional, Grandma pizza, whipped ricotta garlic knots topped with radish pesto and entrees featuring “trash fish” like anchovies and smelts (“things that are low on the food chain,” Abe said.)

Although Shuggie’s was in the works before COVID-19 hit, the goals of their project evolved as the pandemic began affecting multiple parts of the foodservice supply chain.

“[With COVID] we’re seeing how much produce is being wasted because supply chains are broken, and seeing how vulnerable farmers are,” Abe said. “This has exposed the long-existing cracks in our food system. We’re hoping to rapidly incorporate different types of produce restaurant operators usually say no to.”

Besides serving a unique spin on pizza, Abe and Murphy said their primary goal is to educate people about the impact their food choices — no matter how small — can have on the environment.

“People feel disempowered when it comes to tackling climate change because it feels insurmountable,” Abe said. “We want people to know that you can use your stomach to influence the future of the planet.”

For their part, Abe and Murphy want to waste as little food as possible in their kitchen. When their four-day dough starts to get a little too fermented, Murphy said they will just use it as breadcrumbs, for example. But even though they’re hyperaware of the ingredients and waste that come into and out of their restaurant, Shuggie’s is not committing to a zero-waste because as they say, there is really no such thing as a completely zero-waste facility. Instead, they will do the best they can to be a closed-loop ecosystem.

Murphy said he believes Shuggie’s has potential to grow to new markets, but for now they’re focusing on the grand opening of the concept in spring 2021 and seeing how well it resonates with the community.

“If someone told me i could save the planet by eating a slice of pizza, I’d do that all the time,” Murphy said.