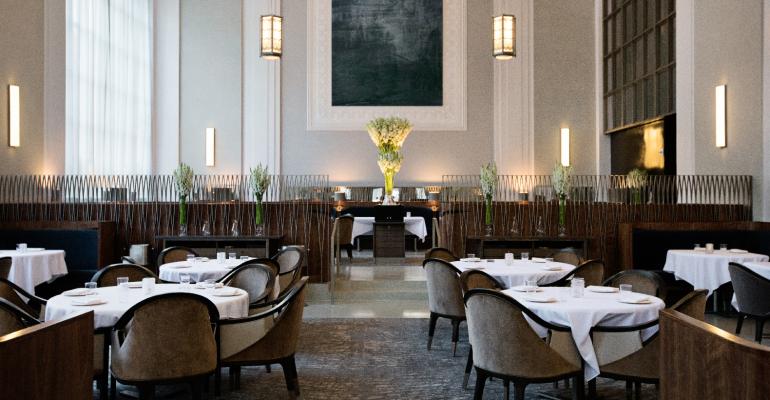 Eleven Madison Park will reopen on June 10 with a meatless menu, the fine-dining restaurant in New York City announced on its website.

The restaurant also has committed to giving five meals to food-insecure New Yorkers for every meal purchased in the restaurant.

Executive chef and owner Daniel Humm said the decision to go meatless came after the transitions the award-winning restaurant has made during the pandemic. Those included closing the restaurant and laying off most of the staff, but keeping a small team in place to prepare meals for hunger-relief organization Rethink Food.

“Through this work, I experienced the magic of food in a whole new way, and I also saw a different side of our city — and today I love New York more than ever,” Humm said.

“What began as an effort to keep our team employed while feeding people in need has become some of the most fulfilling work of my career. It is a chapter in my life that’s been deeply moving, and for which I am very grateful,” he added.

“It was clear to me that this work must become a cornerstone of our restaurant.”

But the pandemic also drove Humm and his team to think more about the food they were preparing and serving, he said.

“We have always operated with sensitivity to the impact we have on our surroundings, but it was becoming ever clearer that the current food system is simply not sustainable, in so many ways,” he said.

“We use food to express ourselves as richly and authentically as our craft allows — and our creativity has always been tied to a specific moment in time. In this way, the restaurant is a personal expression in dialogue with our guests.

“It was clear that after everything we all experienced this past year, we couldn’t open the same restaurant,” hence the decision to go meatless.

Under Humm’s stewardship, Eleven Madison Park, or EMP as it has come to be known, has won just about all the awards that can be given to a restaurant. It has received the maximum four stars from the New York Times, three stars from the Michelin Guide, the Grand Award from Wine Spectator, and it was named the best restaurant in the world by The World’s 50 Best Restaurants. Humm and EMP have also won seven James Beard Foundation awards.

It was opened in 1998 as part of Danny Meyer’s Union Square Hospitality Group. It was then bought by Humm and then-general manager Will Guidara in 2011. They parted ways in 2019.

Humm said the process of switching to a menu with no animal products allowed him and his team to continue to work with local farmers and to gain greater appreciation for produce.

“I find myself most moved and inspired by dishes that center impeccably-prepared vegetables, and have naturally gravitated towards a more plant-based diet,” he said. “This decision was inspired by the challenge to get to know our ingredients more deeply, and to push ourselves creatively. It wasn’t clear from the onset where we would end up. We promised ourselves that we would only change direction if the experience would be as memorable as before.”

Humm’s experience has been shared by other chefs who have removed meat from menus and found that the exercise has opened new culinary vistas. For example, John Fraser, who started offering meatless menus on Mondays at his former New York City restaurant Dovetail in 2010 said it opened a “portal for creativity.”

He later opened the city’s first upscale vegetarian restaurant, Nix, in 2016. That restaurant has since closed.

Humm added that “It is time to redefine luxury as an experience that serves a higher purpose and maintains a genuine connection to the community. A restaurant experience is about more than what’s on the plate. We are thrilled to share the incredible possibilities of plant-based cuisine while deepening our connection to our homes: both our city and our planet.”

The meals will remain luxurious: EMP will continue with its tasting-menu-only format, priced at $335 per person, including tip.

A restaurant spokesperson said that was the same price as before the pandemic, but the menu that included meat generally was comprised of 8-10 courses and the new one will have "12 or so" courses.

Humm’s move comes as other organizations reexamine their relationship with meat. The Culinary Institute of America’s Menus of Change conference, founded in 2015, has for the past few years been promoting a “protein flip,” in which the majority of ingredients on a plate are fruits, vegetables and grains, and last week the recipe web site Epicurious said it would no longer provide recipes with beef.

Epicurious said it had actually stopped posting recipes more than a year ago, but only made the announcement last week as the site was not hampered by the lack of beef.

“The traffic and engagement numbers on these [beef-free] stories don’t lie: When given an alternative to beef, American cooks get hungry,” it said.