The Global Plant-Forward Culinary Summit, conducted virtually this year March 30-April 1 by the Culinary Institute of America, has acquired a rite-of-spring status since its annual deep dive into the potential of produce coincides with planting season in the northern hemisphere. As always, this year’s program celebrated plant-forward cuisine that will work across the seasons and provided savvy strategies to help chefs exploit the appeal of produce.

Create “dad dishes.” Narda Lepes, chef-owner of Narda Comedor in Buenos Aires, Argentina, spoke of using familiar protein items to lure her meat-loving, veg-averse customers. To entice male diners in particular, she features ribeye steak to anchor the plate, the remainder of which she fills with vegetables. She uses whole vegetables both for their visual impact and to realize her goal to make 50% of every plate vegetable-forward.

Related: The Reuben sandwich is reimagined in restaurants with cross-cultural and plant-based options

Lepes takes a similar meat-meets-veggies approach when she braises onions in beef jus to create a concentrated flavor bomb that she uses to top pureed potatoes; together with a sprinkle of nuts, the dish delivers maximum taste and texture appeal with minimum use of meat.

Blayne Bertoncello pulls off similar culinary sleight-of-hand at his O.MY Restaurant in Beaconsfield, Australia, outside of Melbourne. He starts with zucchini grown in his own garden that he grills and bastes with chicken fat, then dresses with chicken jus and garnishes with chicken skin for a punch of crunch. Bertoncello recommends accentuating the positive, notably the freshness of the farm-grown vegetables and the unexpected pops of flavor, as a means to divert attention from the lack of meat.

Related: A closer look at the menu trends that are driving traffic across all segments

Create pretty plates. Chef Eric Ripert, lauded for his work at seafood-centric Le Bernardin in New York City, may have surprised some attendees when he spoke enthusiastically about his vegetable tasting menu. Introduced to the restaurant’s repertoire in 2016 to address rising customer demand, it now represents about 15% of orders. He says that the key to its success is simple: Each dish benefits from the same impeccable technique and beautiful presentation as the fish options.

Attractive plates also loom large in the work of chef Matthew Kammerer, whose Michelin-starred restaurant in The Harbor House Inn in Elk, Calif., draws inspiration from both the surrounding land and the adjacent ocean. The restaurant reopened for outdoor dining service on March 4 with a tasting menu that smartly balances both influences, like the abalone roasted inside kelp. Other vegetal components include shiitake rice and nori, all composed in an exquisite, painterly presentation.

Courtesy of the Mushroom Council 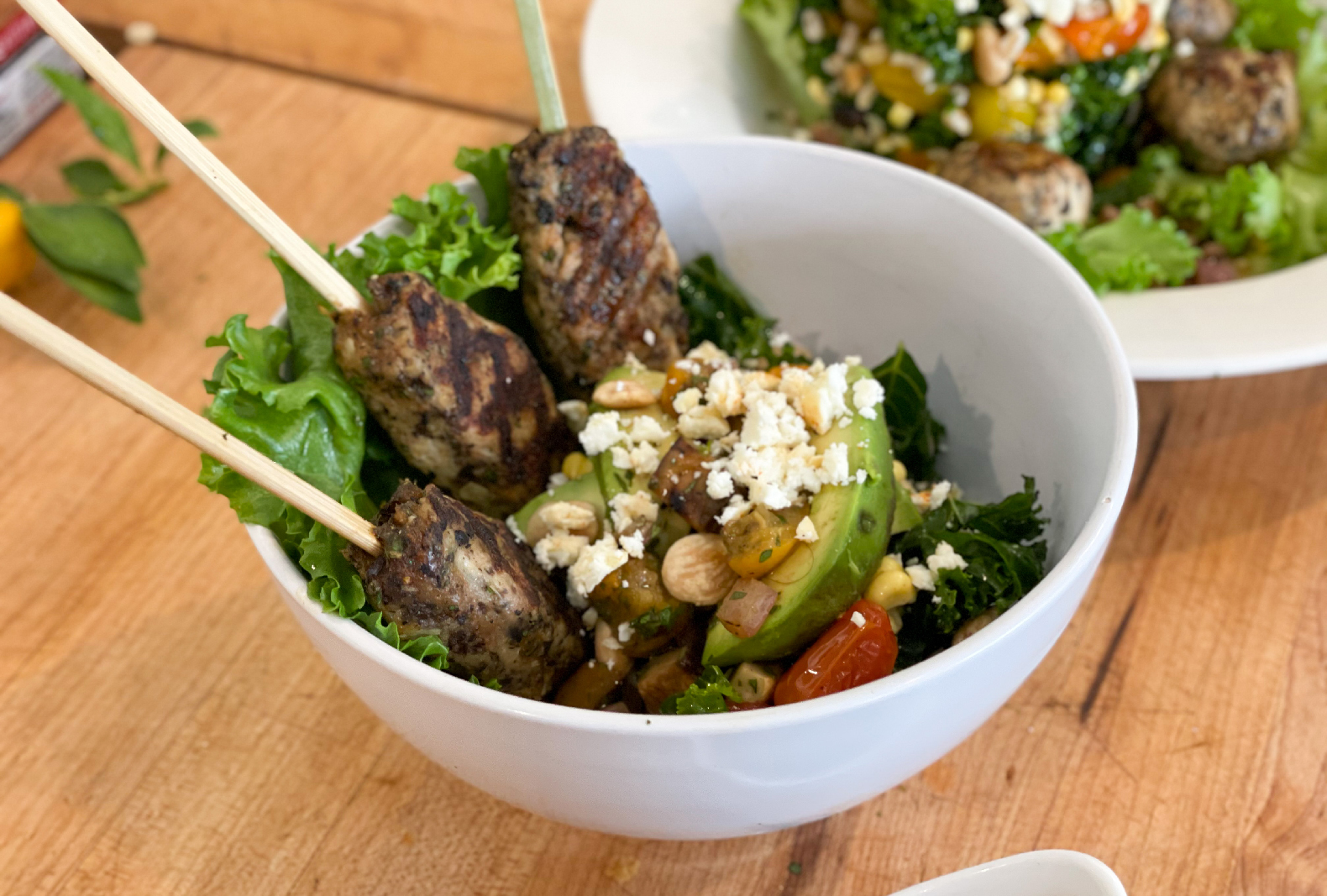 Create a strong story. Mushrooms are reliable menu workhorses that offer a case study on recapturing coolness and building buzz. According to the Mushroom Council, skyrocketing mushroom sales at supermarkets during the pandemic were driven by their potent combination of comfort and a reputation for immunity and nutrition. In addition, The Blend, the Council’s trademarked cooking technique that originally combined chopped mushrooms with ground beef, has expanded to include other meats as well as other plant-based food such as tofu and oat milk products.

Showcasing the versatility of The Blend, chef Clifford Pleau constructed a Blended Turkey & Mushroom Skewer, Farro and Vegetable Bowl. Enhanced by mushroom broth,  feta cheese, roasted tomatoes and toasted Marcona almonds, the dish is finished with a relish of charred citrus, baby portobello mushrooms and grilled red onions with a drizzle of the broth.

Preview of coming attractions. Tara Stevens, executive chef at El Fenn in Marrakech, Morocco, promotes the bright flavors of that country by using ingredients that are common in its cuisine, like preserved lemon, the spice blend ras el hanout and argan oil extracted from local trees. Stevens encouraged chefs to experiment with the latter because of its nutritional density and easy compatibility with other foods, which she demonstrated in her Barley Salad with Orange Blossom Water with dates and oranges that she dressed with argan oil and garnished with fresh mint.

On the subject of the next “it” vegetable, Eric Ripert suggested that chefs look to an unloved, underappreciated and inexpensive staple, as French chef Joël Robuchon did in the 1980s when he turned mashed potatoes into the ultimate side dish and an international sensation with his two-to-one potato-to-butter ratio that elevated both items to new gastronomic heights.

One possible candidate is the humble turnip, which starred in Turn-Ups Two Ways created by Matthew Raiford, chef/owner and sixth-generation farmer at Gilliard Farms, in Brunswick, Ga. An authority on Gullah-Geechee cookery, Raiford uses both the turnip bulbs and the greens in a salad bound by crème fraîche and served with quarters of warm homemade naan.

An error in the name of the Global Plant-Forward Culinary Summit has been corrected.
TAGS: Food & Drink
0 comments
Hide comments
Recommended Reading