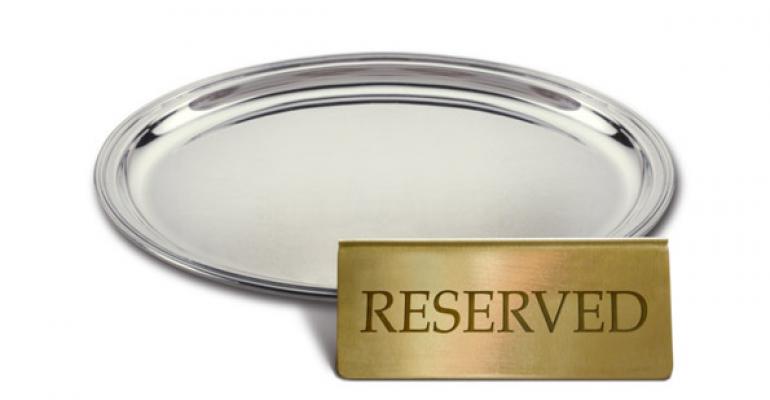 Reservations, and in particular, no-shows, have always been a tricky issue for operators. The topic has heated up of late, spurred by high-profile places like Noma, one of the top restaurants in the world, going on the offensive. In March, the Copenhagen restaurant posted, and then deleted, an image on Twitter of its staff giving the middle finger to diners who didn’t show up for their reserved table. A month later, Red Medicine in Beverly Hills made headlines by naming (and shaming) its no-shows on Twitter.

Now, new analysis from The Wharton School of the University of Pennsylvania suggests restaurants that take reservations would be more profitable penalizing no-shows with hefty charges, and even offering slight discounts to those who do actually show up. It’s the work of Wharton PhD student Jaelynn Oh and Wharton operations and information management professor Xuanming Su.

Taking into account the restaurants’ meal prices, diner capacities and other factors, the two suggest in a paper titled, “Pricing Restaurant Reservations: Dealing with No-Shows,” that just taking credit card information or levying small fines isn’t enough. Penalties should equal the average price of a meal for each person in the party that doesn’t show up.

The restaurant industry is as much about space as it is food, write Oh and Su, who compare open tables to machines in a factory not producing. Both are losing money, and in an industry with approximately a 20-percent rate for no-shows, at least in major cities, that can mean plenty of lost revenue.

Applying math to an industry predicated on food, as only Ivy Leaguers could, the duo found the mathematically optimal approach would be penalizing a no-show party of four $200 if the restaurant’s average meal costs $50.

“That was quite shocking, because most restaurants aren’t charging such a high no-show policy,” Oh says in a story on [email protected], the school’s biweekly business news and analysis Web site. Not many restaurants are fining no-shows, but those that do, typically charge in the $50 to $75 range. Oh does note that some restaurants are in essence charging higher penalties when they sell tickets for a prix fixe tasting menu, but the “psychology behind it is different.”

Just as penalizing no-shows is important, Oh and Su write that restaurants should also reward those who do show up. Those customers should get a discount because they “bear the risk of paying a no-show penalty.” And, since walking in without a reservation is an option, there is “pressure on the restaurant to make [reservations] more attractive by charging a lower price.”

The consensus comes from Oh and Su applying their model to real-life restaurants, including an Asian one in Philadelphia, which has about 100 seats at 40 tables. It fills 60 percent of those seats through reservations and the rest are walk-ins. Meals are approximately $50 and last two hours. Taking all that and more into account, the researchers found the restaurant could increase profits by 7.4 percent by giving a 5-percent discount on slower nights to customers booking in advance. Imposing fees on those nights didn’t make much sense, but Oh and Su say the owners could earn 14.5 percent more profit by charging a no-show fee equal to the price of a meal on busier nights like weekends.

Not every restaurant should follow that exact model, obviously. The authors suggest some restaurants would even be better scrapping reservations altogether, which is almost exactly what an email from Ada Street owners David Morton and Michael Kornick explained to their customers last week.

Starting on June 1, the Chicago restaurant limited reservations to just 5:30-6:30 p.m., with the dining room becoming first come, first serve after. “Reservations can be restrictive for a small, very busy restaurant,” the email read, “and we want you to have more opportunities to visit at whatever time you choose.” Previous guests can call 60 minutes ahead of visiting Ada Street to have their name placed on a guest list, and when the full party arrives, it moves to the top of the list.

Oh does note that restaurants also should factor in customers feelings and their reaction to tougher policies, and not just look at the numbers. “The restaurateur should be careful,” she says. “If they consider the chances of a customer making a repeat visit and customer goodwill, they may not want to upset [him or her] by charging such a high no-show fee.”

But, she says, if a reward is offered for those following through on reservations, the customer might take advantage more often and become a regular, loyal customer.

OpenTable says 10 percent of restaurants nationally take credit-card numbers, but that number has been declining recently. A spokesperson for the online-reservation system says it takes no-shows “very seriously and our service is designed to make it easy for people to secure reservations, remember those reservations and if necessary, cancel/modify.” To mitigate no-shows, diners get a reminder email 24 to 36 hours in advance of their reservation, and another option at that point to cancel or modify them.

When Reservations Are Mission Impossible
May 01, 2008

Chew on this: The changing code of restaurant reservations
May 15, 2013