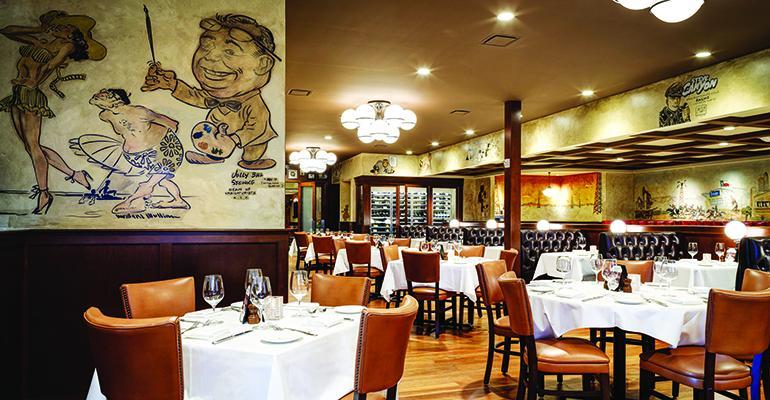 Bankruptcy judge clears path for sale of The Palm restaurants

The Palm restaurant chain may soon be for sale.

A Florida bankruptcy judge on Monday approved the hiring of advisors for the families that have owned the iconic steakhouse chain for 93 years to put it up for sale following a rancorous dispute over royalties.

The Naples, Fla.-based company that operates and licenses 24 restaurants under The Palm banner filed for Chapter 11 bankruptcy in March about four months after a New York court awarded about $120 million to cousins of the founders’ descendants. The cousins, who were not involved in the business, in 2012 filed suit challenging the way they were paid royalties.

Earlier this year, the two owners and grandchildren of the founders — Bruce Bozzi Sr. and Walter Ganzi Jr. — also filed personal Chapter 7 bankruptcy in Florida as the two largest shareholders, according to court filings.

A judge in those cases approved the hiring of advisors to proceed with a sale of the company, which includes full ownership of 18 restaurants and majority ownership of another three, as well as the licensing of three more locations.

Officials for The Palm declined to comment on Tuesday.

Fred Newman, an attorney with Hoguet Newman Regal & Kenney LLP in New York, who represents the Ganzi cousins, said the parties have been unable to reach a settlement so far.

He said his clients were conflicted, sad and disappointed about a potential sale of the company.

“It’s a family business. It’s their inheritance. On the other hand, they’re owed a lot of money. They’re owed millions of dollars,” he said. “But if their cousin Wally doesn’t want to pay them … then they have no choice, the business has to be sold in order to pay off the judgment. I said in court, we’d still be willing to work this out and have a settlement. But that hasn’t happened.”

Newman said there has already been interest from “significant buyers, plural, who are in the hospitality industry and who have professional management, who have resources and expertise and who would be right to buy The Palm and convert it to a more modern, better-managed company,” but he could not say who those potential buyers were.

The Palm first launched in 1926 in New York by two friends from Parma, Italy, Pio Bozzi and John Ganzi, who formed Just One More Restaurant Corp.  In 1972, the company began growing Palm-branded restaurants, known for high-end steaks and cartoon portraits of celebrities lining the walls.

Over 40 years, cousins on the Ganzi side, who had a 20% stake in the intellectual property, were paid a flat rate of $6,000 per year, per restaurant in royalties. In the 2012 lawsuit, the cousins argued that royalties should have been based on a percentage of sales, which is a more traditional method.