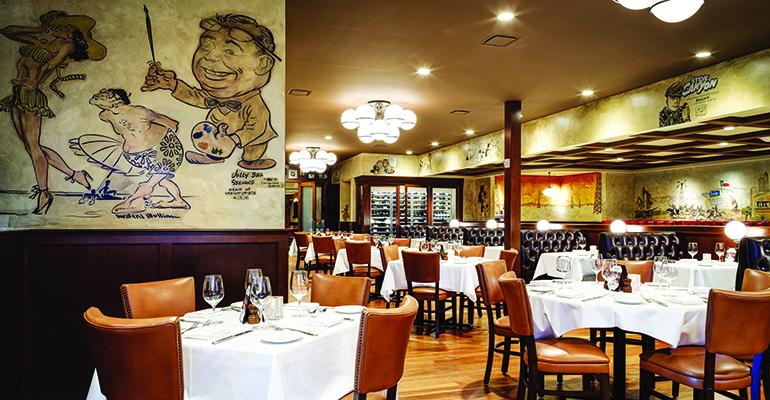 The Naples, Fla.-based company that licenses The Palm steakhouse filed Chapter 11 bankruptcy last week while it appeals a recent judgment in a long-running family dispute over royalties.

The move comes about four months after a New York court awarded $120 million to cousins of the founders’ descendants, who challenged the way royalties were paid over four decades.

Just One More Restaurant Corp., which holds the fine-dining chain’s intellectual property rights, filed for reorganization on March 7 in U.S. Bankruptcy Court for the Middle District of Florida, citing fewer than 50 creditors but liabilities of between $10 million and $50 million. Included as a debtor in the filing is Just One More Holding Corp., which held the real estate for the original restaurant in New York City, which is now closed.

According to court documents, the bankruptcy was filed to gain a “breathing spell” with an automatic stay while majority shareholders appeal the earlier judgment, and work with the plaintiffs to reach a settlement. The documents also indicated shareholders will pursue “possible alternative ways to monetize the judgment.”

The Palm was first opened in 1926 in New York by two friends from Parma, Italy, Pio Bozzi and John Ganzi, who formed Just One More Restaurant Corp. A company called Just One More Holding Corp. was formed in 1946 to own the real estate for the original Manhattan location, which was later sold.

In 1972, the company began growing Palm-branded restaurants, individually licensed by Just One More Restaurant Corp., but the chain’s intellectual property rights remain in the family with the grandchildren of the founders — Bruce Bozzi Sr. and Wally Ganzi — as the two largest shareholders.

In 2012, cousins on the Ganzi side, who are not involved in the business but have a stake in the intellectual property, filed a lawsuit seeking royalties and damages, challenging the flat rate of $6,000 per year per restaurant in royalties. The cousins argued that royalties should have been based on a percentage of sales, a more traditional method.

Fred Newman, an attorney with Hoguet Newman Regal & Kenney LLP in New York, who represents the Ganzi cousins, said the bankruptcy was a “stunt,” and an “attempted end run” by Bruce Bozzi and Wally Ganzi to avoid paying the $120 million judgment in the earlier case, which the presiding judge called a “textbook example of fiduciary misconduct.

“We are confident the bankruptcy court will see through it,” said Newman.

9 investment deals and acquisitions in the independent and emerging chain restaurant world in 2021
Dec 20, 2021