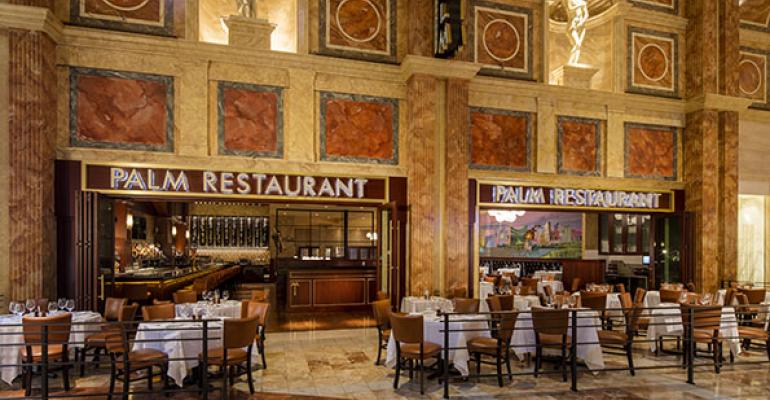 Court finds in favor of plaintiffs after years-long conflict

A family dispute over licensing of The Palm restaurants’ intellectual property has resulted in a $120 million court award to cousins of the founders' descendants.

A lawyer for New York City-based company’s owners, Bruce Bozzi Sr. and Wally Ganzi, said they plan to appeal the ruling, which involved royalties from Just One More Restaurant Corp., the holding company that licenses The Palm’s intellectual property.

The case involved descendants of the original owners Pio Bozzi and John Ganzi, who immigrated to New York City in the early 1920s and opened the Italian restaurant several years later.

The brand grew to more than 20 locations under the ownership of third-generation descendants of the original founders. Bozzi Sr., Ganzi and Bruce Bozzi Jr., who is an executive vice president and fourth-generation descendant, wanted to emphasize the family connection while modernizing the space.

But just a few years earlier in 2012, a group of cousins on the Ganzi side of the family, who are not involved in the business but have a stake in the intellectual property, filed a lawsuit seeking nearly $80 million in royalties and damages.

The dispute was over the intellectual property licensing rights, and it challenged the flat rate of $6,000 per year per restaurant in royalties to be paid to the families.

Earlier this week, the New York Supreme Court awarded more than $120 million to the plaintiffs, who are cousins on the Ganzi side — Gary Ganzi, Claire Breen and the estate of Chuck Cook.

“The Palm is iconic, and the court found that the correct and proper way to license valuable intellectual property is to use the percentage of sales methodology,” said Fred Newman, a founding partner at  the New York City-based law firm HNRK and co-lead trial counsel for plaintiffs, in a news release.

“This is the first time a trial court has fully resolved that important question,” Newman said. “We are delighted to bring a long-awaited measure of justice to clients who were denied their rightful legacy for decades.”

A spokesperson for The Palm’s legal team pointed out the lawsuit was not against the restaurants but rather against Just One More Restaurant Corp., the holding company that licenses The Palm’s intellectual property.

“Certain media reports have contained meaningful inaccuracies,” The Palm statement said. “In an attempt to correct the most glaring of these, we offer the following statement: the lawsuit was not against all of The Palm Restaurants; it was against Wally and Bruce as directors and majority shareholders of Palm One (Just One More Restaurant Corp.).”

“As they prepare their next steps,” the company said, “they will continue to take care of their valued guests and employees.”