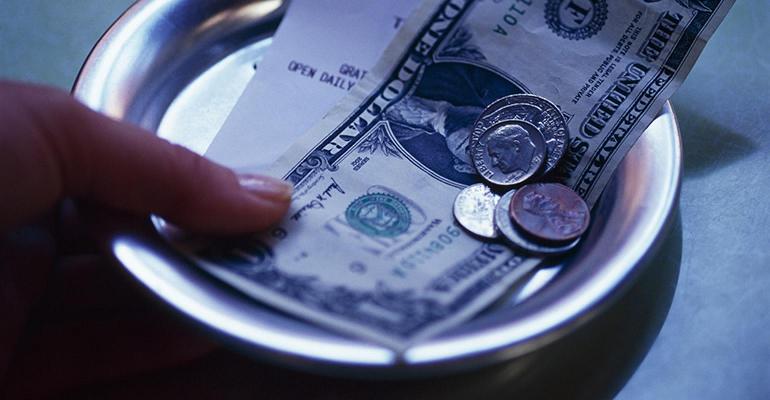 Creatas/Creatas/Thinkstock
The tip credit could be brought back later this year.
Operations

The 80/20 tipped wages rule may be coming back: Here’s what that means for operators

The U.S. Department of Labor proposed a rule on June 21 that would define and limit the amount of non-tip producing work a tipped employee can perform when being paid with a tip credit. The rule would essentially bring back the 80/20 tipped wage rule, which the Trump administration rolled back last December.

Currently, the Fair Labor Standards Act allows employers to pay tipped employees as little as $2.13 per hour, while making up the rest in earned tips to make up the balance of the minimum wage, which is currently at $7.25 per hour. This proposed rule would limit the work that those employees can do that would be directly tied to gratuities.

Related: New York state eliminates tip credit for some; but keeps it legal for restaurant workers

Nation’s Restaurant News spoke with Daniel Boatright, attorney at employment law firm Littler Mendelson about what the new rule entails, how it’s different than before and how operators should prepare for it to go into effect:

Is this the same 80/20 rule as before or is it different?

It's very similar. But one of the things that is part of this new proposal is an attempt to bring greater clarity as to what goes on the 20% side of the equation and what goes on the 80% side. Previously, none of those concepts were really defined. […] I think what is lacking is, if you're if you're going to expect employers and employees to understand what goes into those categories, it's going to take more detail than what's in there right now. For example, a server’s tip producing duties are referred to as waiting tables. But what does that mean? Is it just the time that you're standing at the table talking to the guest? Does it also include the time that you're processing the guest check? Does it include the time that you're retrieving their food orders from the kitchen and delivering them to the tables? How broad is “waiting tables?”

Do you think we’ll get a clearer definition there?

The Department of Labor has requested or solicited comments until August 23, and one of the things they've asked for is for folks to comment on the examples that they have proposed and on whether they need more examples and need to address more jobs. […] If there is going to be an 80-20 rule, then there needs to be greater clarity on what is within the tip producing category and what's in the directly related to producing category.

The proposed rule also talks about a ‘substantial amount of tipped work.’ How is that defined?

A substantial amount of time is defined in two ways: One way to fall into the category of substantial amount of time is if you spend more than 30 continuous minutes on non-tip producing work, then all of that time has to be considered non-tip-producing and you can't take the tip credit for it. And then the other way you fall into the category is under that the 80-20 rule. So, if you spend more than 20% of your total hours for the work week on non-tip-producing work, then the portion of that that exceeds 20% has to be paid for with minimum wage.

Do you think, given how complicated this seems to be, that business owners will just find it easier to pay everyone minimum wage?

That’s a possibility. There are already a handful of states that that don't allow the tip credit at all. But then everybody's working on the same playing field and menu prices go up to account for that. The other thing that has been suggested is to only have servers purely do guest service work, but then what do they do about idle time? How do you how do you account for that in this 80-20 rule?

So, if this rule is passed, how do you think it could change the occupation of server?

I think it's going to be similar to what we were seeing when 80-20 rule was gaining acceptance in the courts and most employers were trying to comply with it. You have to focus tipped employees’ responsibilities on those guest-facing functions and minimize the time spent on support functions. So, for example, a lot of companies were hiring silverware rollers for minimum wage, as opposed to having servers rolling silver. There are also inconsistencies in the proposed rule.  For example, a busser clearing tables and replacing table linens is in the tip-producing category, but a server or a bartender wiping down a table to prepare for the next guest is not in a tip producing category. It's in the directly supporting category.

Do you think we’re heading in the direction of getting rid of the tip credit completely?

What do you think operators that use the tip credit should do to kind of prepare for this?

Have tipped employees focus on guest service and minimize the time that they are devoting to non-tip-producing work. It’s a challenge because it's still undefined as to what falls into each category. And we won't really know until the final rule comes out on this later this year at the earliest. […] One of the things that a lot of operators have done is minimize the time that tipped employees are opening the dining room and closing the dining room. A lot of companies have shifted to a model of paying for minimum wage for that pre-open and post-close time.