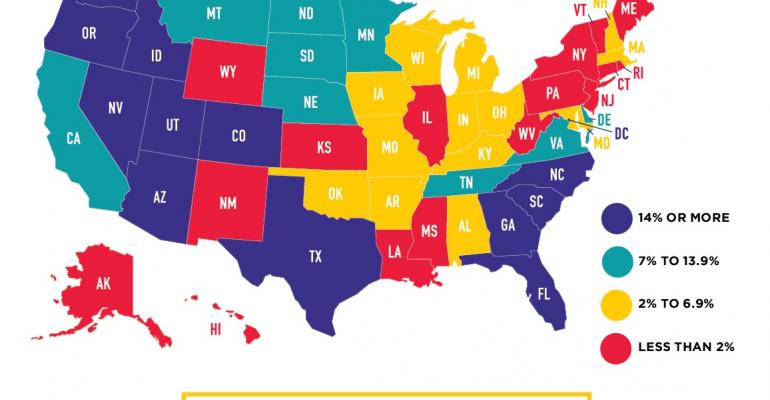 Association expects disruption, but industry sales to reach $1.2 trillion by end of decade

Restaurant industry sales are expected to reach $1.2 trillion by the end of the next decade, according to the “Restaurant Industry 2030: Actionable Insights for the Future” report released Tuesday by the National Restaurant Association.

That trillion-dollar forecast springboards from industry sales estimated at $863 billion for 2019 and comes with expected changes in what actually defines a “restaurant.”

“The basic paradigm of what constitutes a restaurant is rapidly changing,” said Hudson Riehle, senior vice president of the association’s research and knowledge group, in an interview. And many of those anticipated changes are linked to technological advances, he said.

The “Restaurant Industry 2030” report, on which the association partnered with American Express and Nestlé Professional, examined the key indicators shaping the future of the industry. The findings were based on input restaurant sector experts, futurists and government statistics.

- The industry workforce will likely exceed 17 million by 2030.

- Total U.S. employment is projected to increase at an annual rate of 0.5% during the next decade.

“When you think about industry growth over the next decade,” Riehle said, “it is decidedly optimistic. Consumers use restaurants both for the convenience and social aspects.”

“Over the next 10 years, there will obviously be robotic delivery and drone delivery,” he said. “When I think about the industry, it truly is this giant oak tree that continues to develop additional branches of growth.”

Riehle, who has worked the association’s decade reports back to 2000, added that the majority of findings are related to technology.

“Just as society overall has become much more integrated with real-time technology, the industry reflects that,” he said. “I can’t emphasize enough the large numbers of opportunities that are increasing at an exponential rate now vs. the geometric-linear rate.”

Identifying the opportunities is pivotal, Riehle said. “History has demonstrated very well that in many cases the greatest threat to an industry comes from outside that industry and not from within,” he said.

The restaurant association worked with Foresight Alliance, the Washington, D.C.-based consulting firm, to develop 10 disruptors that may impact restaurant operations over the next decade. They include:

Information technology and artificial intelligence, the report said, will enable restaurants to interact in real time with “an evolving digital ecosystem of apps, services and personal AI assistants” — apps such as Siri (Apple) or Alexa (Amazon) — that learn the users’ preferences. “It will be increasingly important for restaurants to provide accessible, detailed and accurate data,” the report said. “Restaurants will be able to use new data capabilities to develop dynamic menus with real-time pricing that can respond to supply-and-demand changes. Relevant data about restaurant operations will include details on nutrition, preparation methods, ingredients and supply-chain authentication.

The trend toward restaurants that exist only online or via an app will accelerate, the report said. “Growth will be fueled by the expansion of central kitchens for food prep and social-media marketing that showcases menus, philosophies and chefs,” it said. “New chains could quickly emerge regionally or nationally.

“Third-party delivery apps are emerging as a key gatekeeper between consumers and restaurants, able to capture consumers’ business with convenient, frictionless ordering,” the report said. “With a growing number of consumers using third-party apps as their primary interface with restaurants, app companies could build on these relationships by creating private- label brands, similar to what many big-box and grocery stores have done. By contracting with local restaurants to offer app-associated ‘house-brand’ meals, app companies could further sever a direct connection between restaurant and consumers.” For example, celebrity chef Rachael Ray in October began providing a “favorite recipes” platform on Uber Eats.

The report said people will have more time to eat, with both hands, in their vehicles. “Longer travel times will be possible, making it useful to carry and reheat food while on the road,” it said. “Restaurants can geo-target their marketing. Eventually, driverless cars will go through drive-thrus.”

Media-streaming services like Netflix or Amazon Video could buy or pair with existing meal delivery services to create an all-in-one dinner and entertainment experience. “An online retailer could leverage one-click ordering, logistics and delivery expertise to add meals to their subscriptions,” the report said. “Restaurants could move beyond current loyalty or rewards programs and offer flat-rate monthly subscription plans to customers.”

Automation technologies such as front-of-house touchscreen ordering kiosks are becoming common in many quick-service and fast-casual establishments. “Back-of-house operations will become more fully automated as costs fall and flexible, reprogrammable robot systems grow more sophisticated,” the report said. “This will allow automation of more of the repetitive elements of food preparation and even permit motion- capture replication of the movements of chefs. Chefs will work in collaboration with these systems, using their physical senses and expert judgment.”

The decline of shopping malls and brick-and-mortar retail will lead to restaurants becoming social destinations. “With their expanded and versatile seating options, gastropubs and full-bar fast-casual restaurants could evolve into American versions of German biergartens, with less emphasis on table turnover and more emphasis on facilitating repeat socializing by customers,” the report noted. “Café seating and local independent restaurants could help transform food courts in the direction of food halls and bustling Asian street-food markets.”

Weather volatility could drive up food costs by causing disruptions in agriculture and the food distribution system, the report noted.

Artificial Intelligence, the report said, will analyze data and information “about foods, beverages, ingredients, chemical compounds and tastes will result in the creation of recipes, dishes and beverages beyond, and unlike, what humans would produce. Some AIs will become as well-known as human chefs, baristas and bartenders.”

An aging U.S. population, advanced genetic knowledge and the rising incidence of lifestyle diseases such as heart disease, obesity and Type 2 diabetes will create growing demand for meals that provide specific health benefits to diners, the report said. “In some cases, these meals may be prescribed by doctors or as part of coverage by insurance companies,” it said. “For restaurants, costs for providing these meals could be offset by relationships with health-care and insurance providers, which would direct patients to eateries with the proper medical meal and portion for their condition.”

The full “Restaurant Industry 2030” can be downloaded from Restaurant.org/Restaurants2030.